This page is obsolete, but kept for posterity.

I've since revisited this game and found a better solution for playing it. Read that page here.

Keep reading if you're interested in my initial failed attempt.

Well, this was frustrating.
As mentioned, before, DND-likes are an early sub-genre of CRPGs, which started with dnd (or perhaps pedit5) on the PLATO network, and culminated with Daniel Lawrence’s Telengard’s commercial release in 1982.

Lawrence’s mainframe branch of DND appears to be an important missing link, a predecessor to Telengard, and also to multiple other DND-likes by other authors. Lawrence denied having ever played dnd on PLATO, while dnd’s maintainer Dirk Pellett claims he outright plagiarized it.

I have just attempted to play a VAX/VMS port of DND, which I downloaded here. To make it work I had to emulate a VAX machine with the emulator SIMH, figure out how to install OpenVMS, and then mount the disk images using little but a sparse and partly incorrect readme file and some rusty knowledge of Unix.

It runs, but there’s a huge problem. The map display is incomprehensible! Take this screenshot: 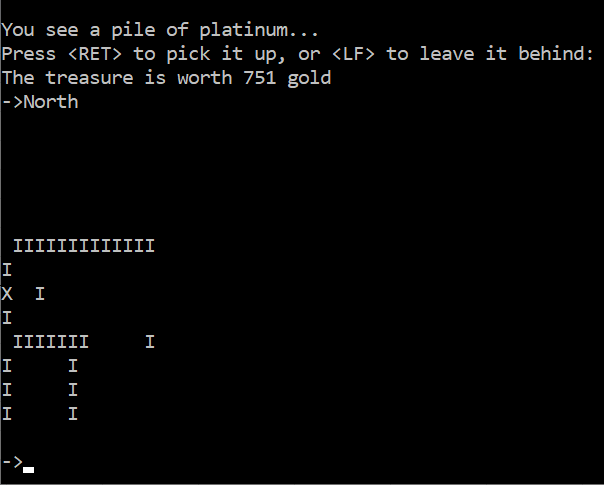 Just what is going on in that mess of I’s and that X? I know the X is supposed to be me, and the I’s are supposed to be walls, but the output somehow got horribly mangled.

I mapped out the general area by brute force walking into every wall I could, and this is what the vicinity actually looks like, with an arrow pointing to where I am standing: 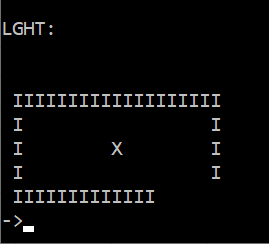 Take another step left, and it makes less sense:

The display must be glitched. I don’t know if this is a porting bug, or flawed emulation, but after about two hours of trying to map out the first level and getting maybe a quarter of it done, I’m giving up. Mapping half-blind is tedious, and I have no idea how to visually reckon where you are or where the walls are. The maps are much larger than in dnd, and are still filled with teleporters and pits that take you to other floors, at which point I am hopelessly lost and may as well kill myself and restart. The game just isn’t playable in this state.

This is the map, as I had drawn it, at the time that I gave up: 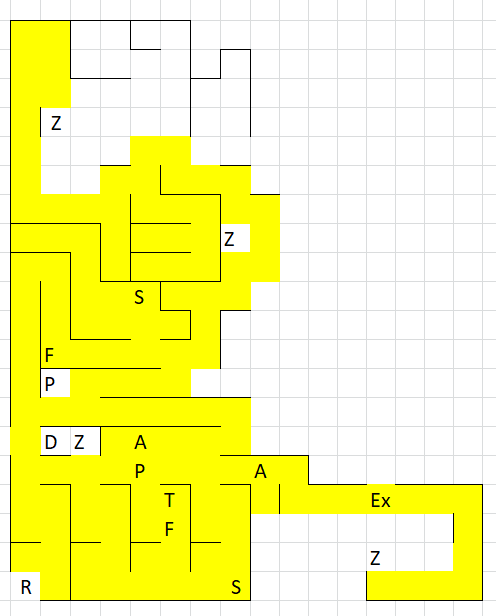 The starting space is on the left edge, near the gap in the left wall, to the left of the D. You can leave the dungeon through the gap in the wall, which saves your game, restores you, converts your gold into XP, and levels you up if you qualify. 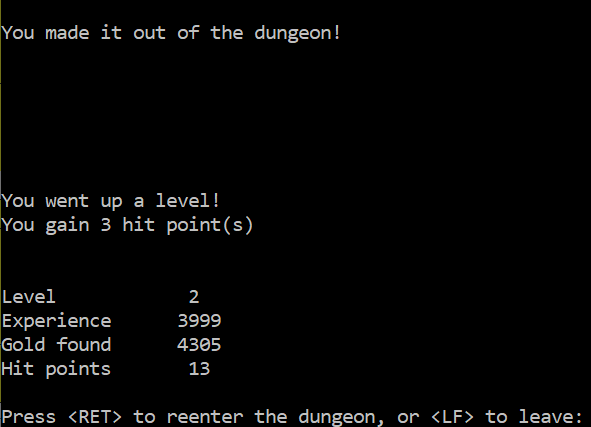 Z – A teleporter that zaps you elsewhere. I did not once ever recover my bearings after being teleported in this manner.

S – A staircase, in this case all of them leading down. I did not try these.

F – A fountain, bubbling water of a random color. Drinking affects your stats in a seemingly random manner.

P – A pit. Sometimes you fall in, sometimes you have a choice whether to climb in or walk around.

D – A dragon’s lair. Guaranteed encounter with a dragon enemy, and death in every case where I tried it or stumbled in. 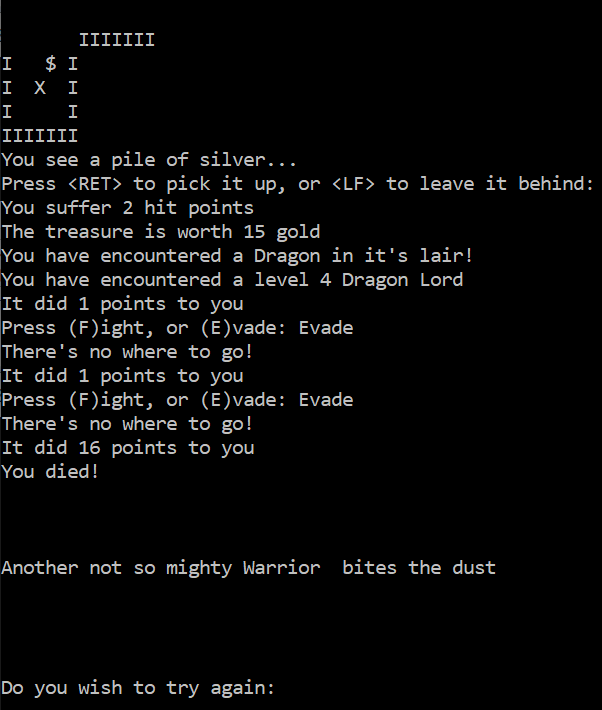 A – An altar. Ignoring it or donating too little can reap divine punishment. Or you can “desicrate” it. 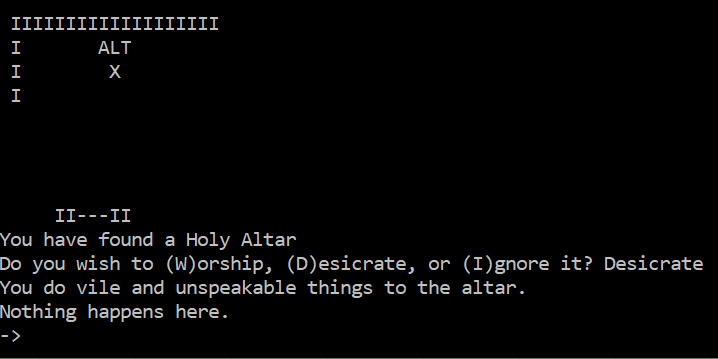 T – A throne. Several options, but I’m not really sure what they do. 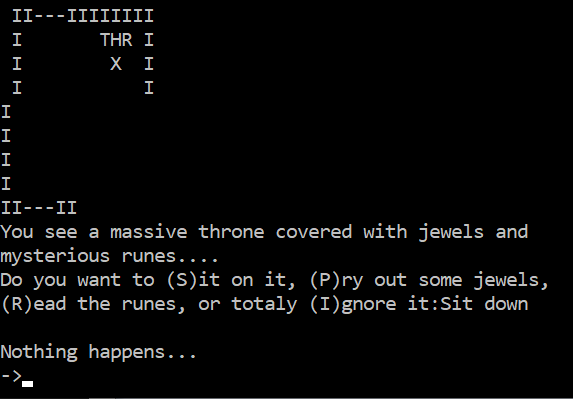 Ex – The Excelsior Transporter! Just like in dnd, it can teleport you to any level. I never tried using it. 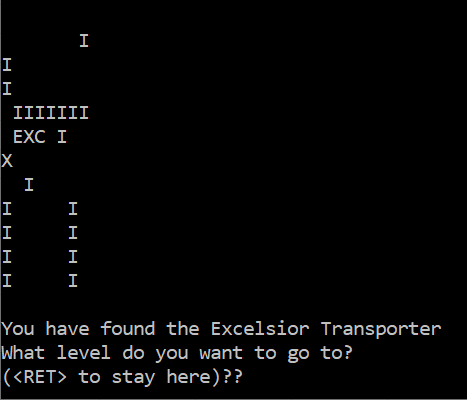 R – Solid rock! But the gods show ironic mercy by teleporting you out to a random location. 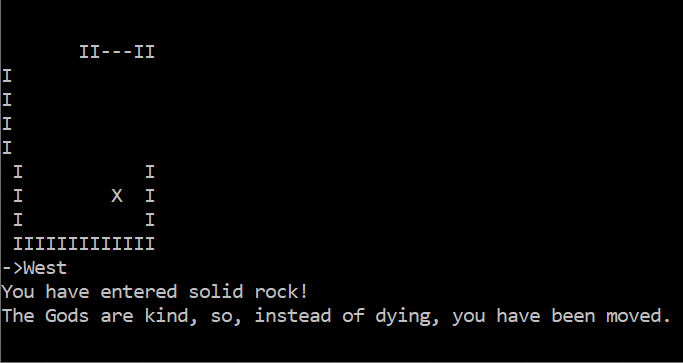 From what I’ve played, it’s clear that Lawrence had played dnd, I wouldn’t go as far as to call it wholesale plagiarism. Some specific elements are, for sure. I’m certain it’s no accident that both games have an Excelsior Transporter, or that your quest is to retrieve an orb. But the general dungeon crawling template isn’t something dnd’s authors can claim exclusive ownership of, and DND has quite a few novel ideas in it that hadn’t been seen before in any prior CRPG.

For instance, the character screen:

The stats are straight out of dungeons & dragons, but for the first time, all six of them are present and accounted for. Class selection is new; pedit5 and dnd lacked this. A choice between multiple dungeons is also new.

Combat is also turn-based, unlike pedit5/dnd where it resolved instantly. 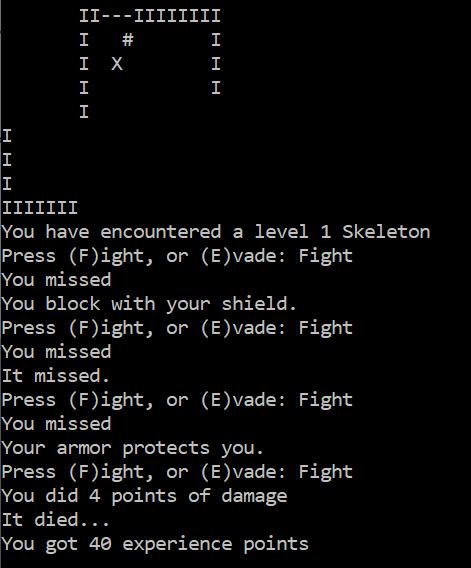 Pressing an invalid button in combat produces a familiar message: 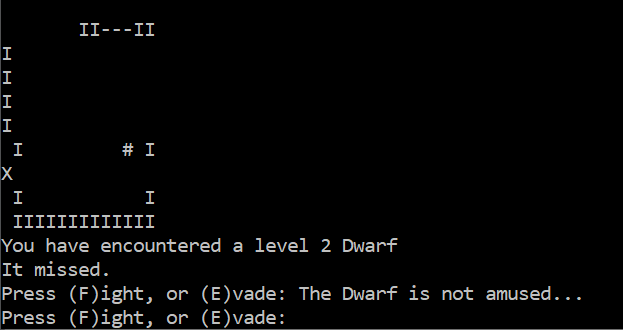 Different enemy types use different combat tactics too. For instance, a “harpie” plays a death song that can infatuate your character and lower your combat ability.

Fighters cannot use magic, but Mages and Clerics can, and have completely different spells available, divided into multiple tiers. I could not advance far enough to see any spells beyond the first tier, but from delving into the image file, I can see that spells in the game include:

There are chests and books, and function much like in dnd. 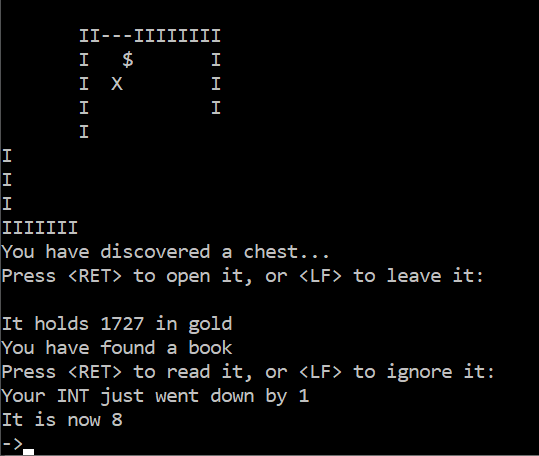 Sometimes the chests have magic gear inside: 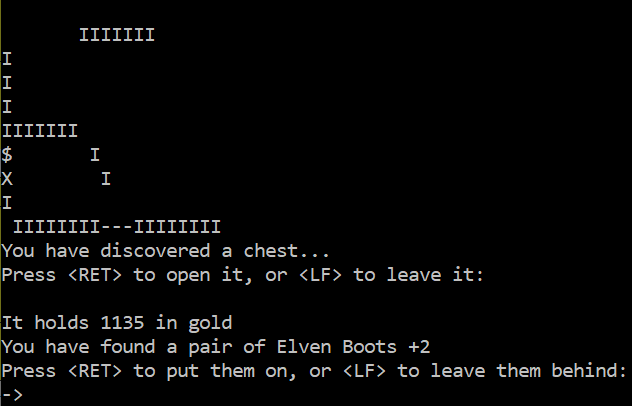 That’s about as much as I can really say about DND without delving deeper, and that’s just not going to happen with this version of the game thanks to the difficulties in mapping it. It’s obviously inspired by dnd, but it’s not a carbon copy either. Combat appears to be a lot more interesting, there are a ton of random events and special encounters that dnd lacks, and the magic system seems to be much better developed. It’s just a shame that my search for a playable version turned up fruitless, because from what I’ve seen, this showed a lot of potential.
Email ThisBlogThis!Share to TwitterShare to FacebookShare to Pinterest