The magic amulet tells you when you are adjacent to a teleporter. This isn’t all that useful to me now; I already know where they all are. But when you encounter a monster, it also tells you approximately how badly it’s going to hurt you. For instance, at full health, a level 200 monster causes the amulet to say “Pushover!!” And it’s not wrong; I can fight them without casting a spell and lose no more than 10% of my HP.


The amulet’s warning appears to be based on how much HP a monster’s attack would leave you with, rather than on its level or how much damage it would do to you. This is a good thing. I can fight several monsters in a row who pose no immediate threat to my life, but as my HP starts dwindling, the amulet’s warnings get sterner for monsters that were previously deemed pushovers.

This also means I finally have a means of testing the dragon’s strength other than attempted suicide. I sought out the dragon, and found it. 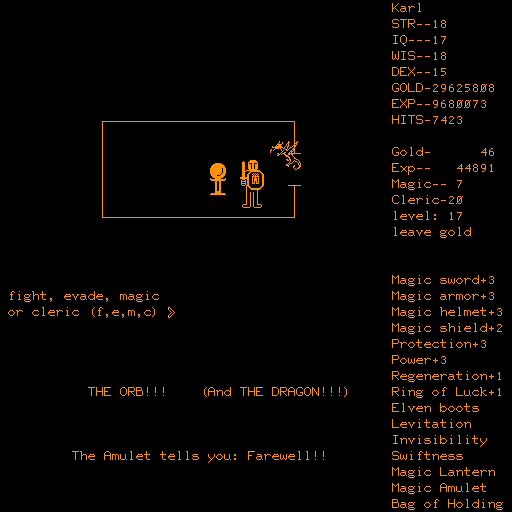 Yeah… that’s not good. It’s gonna be a long road ahead. But at least I can escape easily. Escaping takes me to the square to the left, where I am forced to use a passwall north in order to leave.

One major limitation of the amulet is that it seems to only take into account how well you will fare in a straight fight, and it doesn’t indicate how likely you are to succeed with spells. I’ve had encounters with regular monsters of levels around 1800, which cause the amulet to warn “Farewell!!”, but all of them fell to my spells. Maybe I’m ready for the dragon, maybe not, but I’m not going to try until the amulet gets more optimistic.

I did do an experiment at this point. I tried killing the dragon with the dragon spell (and exhausting my spell supply), but immediately dropped the orb. I stepped away, and then moved back on the square where I found and dropped the orb, and the dragon was back, guarding the orb again. I guess this means you’ve got to kill the dragon and return with the orb in the same run. Not a big surprise, but useful to have verified.

I’m at a point where I can comfortably Excelsior Transport down to level 20, gather 9 million pieces of gold, and walk out with a 500,000 XP gain, and these numbers will keep going up with each run. My strategy right now is to farm levels 19-20, fighting the pushovers, and casting my standard spells on everyone else, until my spells are halfway depleted, and then venture to the surface. Should I run low on spells, I can just stash my gold, leave easily, then come back for the stash with a full stock of spell points, and grind high level enemies on level 2 until my spell stock is depleted again for even more XP.

I doubt I will have much more to say about this game until I’ve beaten it, or until it’s beaten me.
Email ThisBlogThis!Share to TwitterShare to FacebookShare to Pinterest
Labels: PLATO