As chronicled in the last post, I now have complete maps of every level in dnd. If I die now, this is something they can’t take away from me. I completed these equipped with the Magic Lantern, which reveals invisible doors, so if you do not have this item, then some of the doors will appear to you as walls.

And so, here are my maps, and commentary: 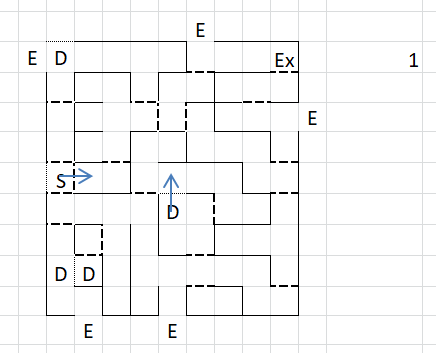 On this level, monsters are always level 1, no matter how much gold you’re carrying.

S marks the starting point, but there’s also a teleporter to level 2 immediately to the left.

E’s mark exits from the maze, of which there are plenty.

D’s mark teleporters that go downward. The square itself is not a teleporter, but the fine dotted line adjacent to a D square is. For instance, if you stand on the D in the middle, you can teleport downward by walking north.

Ex marks the Excelsior Transporter, which can teleport you to any level of the dungeon, at the cost of some HP. This is the only Excelsior Transporter in the game, so wherever you teleport to, you’re going to need to climb your way back to the surface from there one level at a time. The HP cost is probably meant to stop you from going straight to level 20 and getting a giant pile of cash with a level 1 character, but honestly, if you can’t survive the initial HP cost of teleportation, you weren’t going to survive the arduous trek back home anyway. 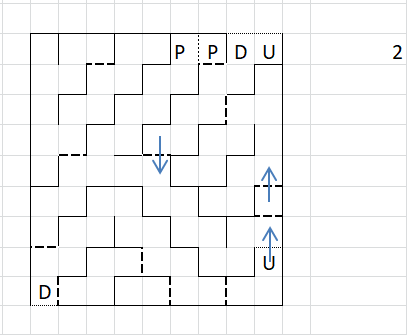 Zig-zagging corridors can make it tricky to figure out where you are, at least until you exit a corridor and find a junction. The pit at the end of a north corridor is a potentially very nasty surprise. 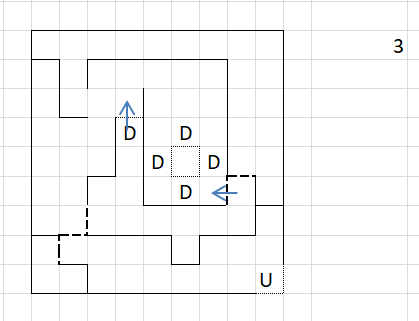 A simple level with a lot of open space. The only Up teleporter is in the lower-right corner, and may be worth using a passwall or two. 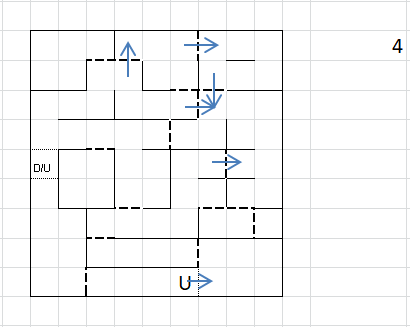 One-way doors complicate the mapping, but it’s not too hard to leave this level. The “D/U” square indicates that going north will teleport you down, and going south will teleport you up. If you’re trying to get home and are in the lower-right area, it might be worth using a passwall to get to the southern Up teleporter. Otherwise, the D/U square is easier to reach from nearly anywhere in the maze. 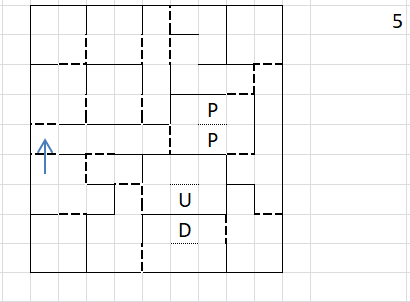 Not much to say, except that the teleporters here were quite sneakily hidden. 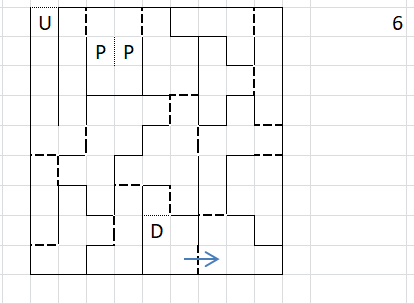 Simple level, not much use for passwall here. 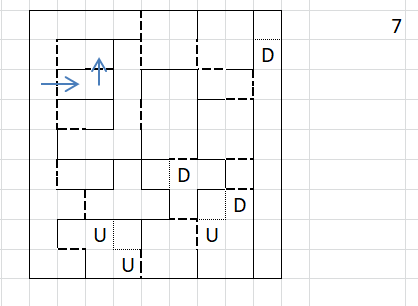 Another simple level, and quite generous with the teleporters. 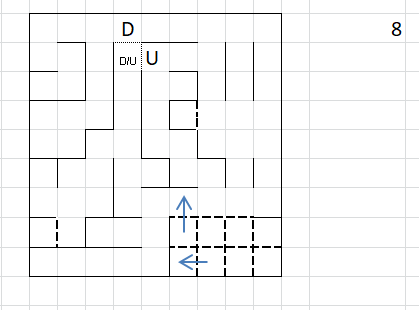 A mostly simple level, tricky to map, but easy to navigate. 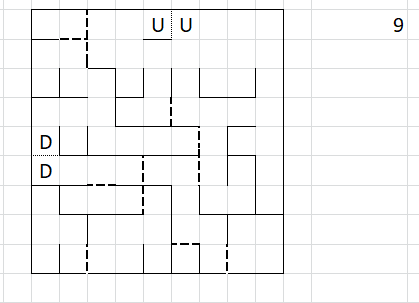 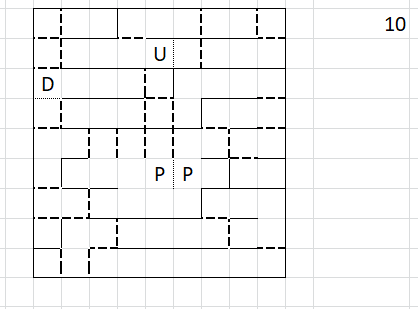 A convoluted layout, and possibly worth using a passwall or two to get to the Up teleporter. 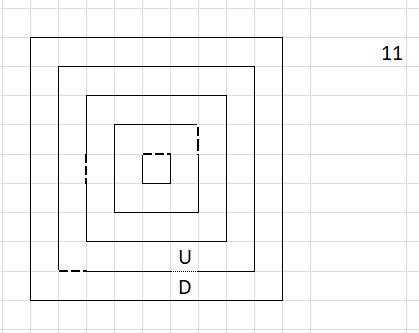 This level is annoying because the doors are all invisible. Without the lantern, it can be tricky to figure out which “ring” you are on. Traversing an edge and counting the squares works well, but random encounters can distract you. 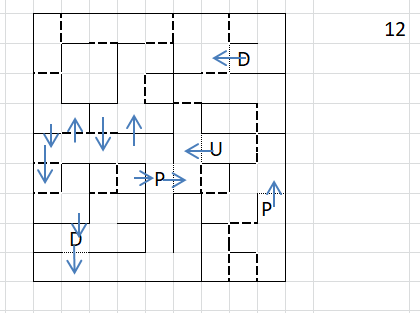 Possibly the most convoluted layout in the dungeon with multiple pits and one-way doors.

There’s a section near the lower-left corner which can only be escaped from by walking through a one-way wall, or by using passwall.

If you have levitation, then floating over the pit makes a good shortcut to the Up teleporter. 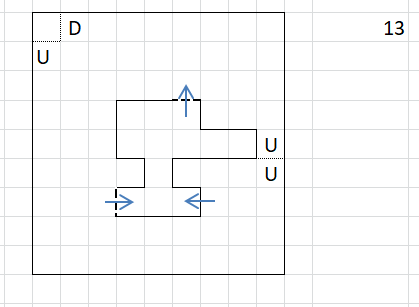 Dead simple. There’s a one-way door leading into the middle structure from the left and a one-way wall leading into it from the right, but they are pointless. Why would you want to go in there? 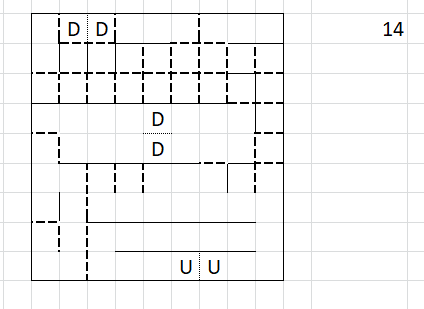 The mazes of doors are insanity, but once you know where you are, reaching the teleporters isn’t too hard. 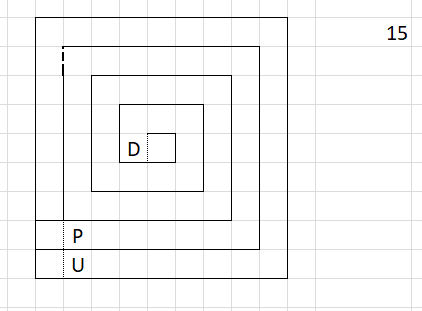 A spiral! The pit is a dirty trick; if you navigate the spiral outward and don’t spot the invisible door, then you’ll follow the spiral all the way to the pit and fall in. 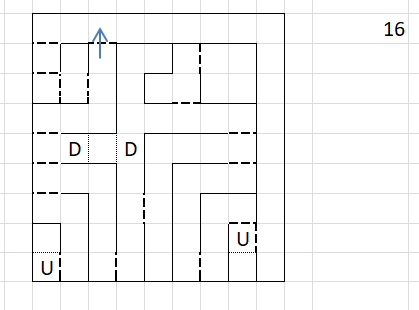 A complex layout, but it’s easy to figure out where you are, and the two Up teleporters are both easily accessible. 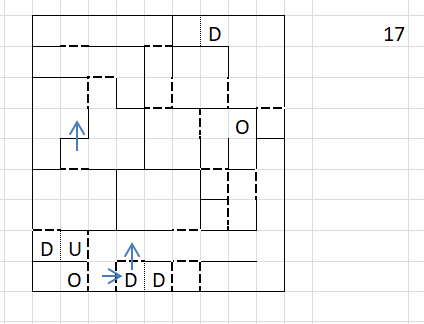 This is the level where I found the Orb for the first time. It seems to move around, though, and I don’t know what triggers it. The O’s mark the spots where I found it.

The layout isn’t too complex, but it can force you to walk a long way to get to the Up teleporter, or to use a passwall. 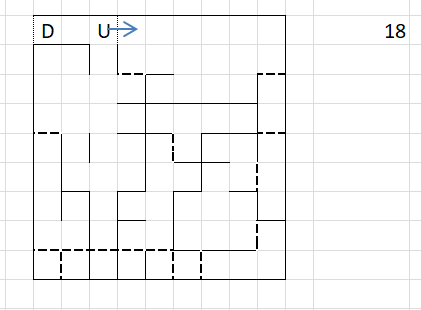 Just another maze-like floor with the teleporters stuck in a corner. It could be a long walk to them, depending on where you are. 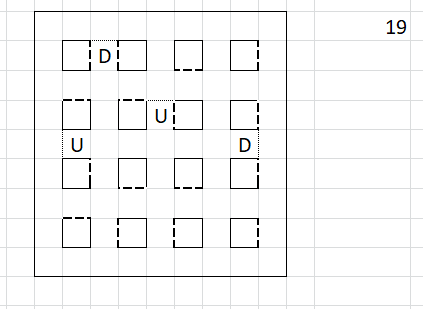 This was annoying to map out, but simple in design. Finding your bearings could be the hardest thing about this map. Good luck if you don't have the magic lantern by now! 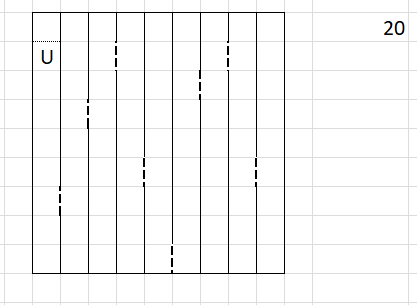 This was also annoying to map out, and yet simple in design. Walking from one end of the map to another could take a lot of steps, and there’s no place where passwall saves you that much time. All of the doors are invisible, so without the magic lantern, this map will look like an array of featureless vertical corridors.
Email ThisBlogThis!Share to TwitterShare to FacebookShare to Pinterest
Labels: PLATO