The first and also the most recent time I ever played Xevious was in 1998, when I got my first Pentium II-class computer, to replace my moribund 486DX which was long past the point where it could play anything still on the shelves at Electronics Boutique. Though I got it mainly so that I could play newer games, I spent the better part of that year playing and replaying Xevious - mostly Xevious - as part of Microsoft Revenge of Arcade, which must have been bundled with the PC as I can't remember ever buying that game; I only remember having it.

I think what made Xevious stand out from the rest of the games in that bundle was the variety, both in visuals and gameplay. Although Xevious is a never-ending game based around infinite gameplay loops, it's a very long loop, split up into 16 segments only visually separated by forest regions, each of which takes about 70 seconds to traverse. Back then, as now, I never came close to finishing all of them, but I kept getting further and further with practice, always motivated by the desire to see what Xevious has to offer next.

We take it for granted now that the shmup is a vertically scrolling affair. That's simply the format which eventually dominated, followed by the sideways variant of horizontally scrolling shmups. The concept follows naturally from the single-screen Space Invaders-style shooting galleries that dominated arcades until 1981, which makes it seem strange that it took so long for vertically scrolling shmups to emerge. Horizontally scrolling shooters beat them by well over a year, with games like Scramble/Super Cobra, Defender/Stargate, Moon Patrol, Vanguard, and Cosmic Avenger making the once-ubiquitous Space Invaders-style game seem obsolete. There had even been some takes on 3D perspective, including Atari's vector-driven Battlezone and Tempest, and Sega's Zaxxon, SubRoc-3D, and Buck Rogers.

Xevious isn't the first vertical shmup, but it's among the first of real quality and influence. Previously, SNK's Ozma Wars and Data East's Astro Fighter created some illusion of vertical scrolling, but without offering the player any kind of vertical movement control, it's difficult to view them as progenitors of the genre. Activision's River Raid, which came out around the same time, certainly fits retroactively, but I found it rather basic and can't determine if it had a lot of influence. Taito's Front Line is an elephant in the room, as it fits the genre labels if a bit awkwardly due to the ground-based gameplay and the rotational shooting controls, but this undoubtedly influenced games like Commando and Ikari Warriors. On the other hand, that particular style of shooter fizzled out even as vertical shmups continued to occupy a strong niche. 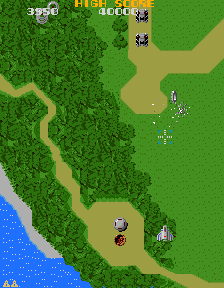 One of the most striking things about Xevious, now as much as then, is that this is not a space shooter like so many other shmupoids of its time and since. You fly not through empty black chaos, but over detailed terrain of roads, forests, oceans, plateaus, and even Nazca lines. You aren't fighting some abstract enemy in space, but are defending your homeworld from an ancient precursor civilization, who had evacuated during the ice age, and now return eons later to conquer the ancestors of those they left behind. You'd only know all that if you had seen Atari's flyer... or read the novelization that Namco designer Masanobu Endō insisted was necessary. This has an interesting parallel to River Raid, also set over scrolling terrain, which came out around the same time on the other side of the Pacific.

Another striking thing is the sheer variety of enemies. All-gray schemes have rarely looked so colorful! The visual inspiration from Star Wars is obvious, with two of the enemies looking very much like the X-Wing and Millennium Falcon, but there is also influence from Alien, Battlestar Galactica, and Bally's pinball table Xenon. The majority of targets, though, are abstract geometric shapes - spheres, pyramids, toroids, and most iconic of all, those huge, flying, spinning mirrors that completely block your shots. Enemies all have differing behaviors too - the toroids, for instance, which are the first type you'll encounter, actively avoid your line of fire, as do the nimbler and more aggressive X-Wings. Many of them are beautifully animated as well, with touches such as cannons that swivel around to the rear as the ship reverses its direction right after firing a shot. My most hated enemy are the black spheres, which materialize anywhere out of nowhere, fire a shot or five as they vanish, and their very presence seems to reduce your own rate of fire. Quite a few ground-based enemies are completely harmless, and are simply worth bonus points to destroy. Canonically, each type of vehicle and target has a cutsey-sounding name, and apart from your own ship the Solvalou and the huge UFO Andor Genesis, I refuse to acknowledge any of them.

Because there are ground targets as well as air targets, Xevious seemingly borrows a page from Konami's Scramble and gives you ground-targeting bombs as well as a rapid forward-firing gun. As in Scramble, these are very slow to fire, but unlike Scramble you get a targeting reticle to show you exactly where they will land, the trajectory isn't affected by your ship's inertia, and the terrain is flat and has no ridges or cliffs to complicate things. Hitting moving targets is, nevertheless, a challenge, and often you may be too occupied with the generally more dangerous air fighters to think about your targets of opportunity on the ground. Andor Genesis itself can only be taken out with bombs, despite appearing as an air target, and only by a single shot right in the core, though you can also toy with it by taking out its turrets one-by-one if you feel brave/suicidal.

The game world, which as I mentioned is divided into 16 vertically scrolling zones, is in fact a single cohesive map only twice as tall as it is wide.


Each of the 16 zones has its left side aligned with one of the shaded lines (they are not sequential), spans the width of 3 ½ vertical strips, and spans the height of the entire map.

Xevious even has a few secrets. Eagle-eyed players may notice their targeting reticle blink red as they pass over empty terrain, which indicate hidden towers which may be bombed for bonus points if you're fast enough, or if you can remember exactly where they are for future playthroughs.

Even more secret are buried flags from Rally-X, which do not light up your reticle, and their exact locations are randomized with each game, but are worth extra lives. I've never found one.

Over 20 years after playing Xevious to death on a computer meant for the likes of Quake II and Unreal, it still has the power to draw me in and keep me playing. I do wish the music wasn't quite so repetitive, and on occasion you can be faced with impossible enemy layouts thanks to the partly randomized nature of their spawning patterns, but this game is fun, aesthetically pleasing, satisfyingly challenging, and rewarding, even after decades of improvements to the genre.
Email ThisBlogThis!Share to TwitterShare to FacebookShare to Pinterest
Labels: Namco