Popeye, you can do better than this. I mainly refer to his fickle, childish, nagging, and mostly useless paramour, but also to this arcade game, which continues Nintendo's post-Donkey Kong trend of arcade platformers being a modicum worse then their previous effort.

There aren't many Popeye video games out there, but this isn't his first. That would be Nintendo's Game & Watch release of the previous year.

Their better known 1982 arcade game is very much from the Donkey Kong strand of DNA, even if Popeye can't jump. The gorilla-like Bluto makes for a natural Donkey Kong surrogate, and takes a more proactive role than Miyamoto's silverback ever did, walking around the course on his own, climbing steps and ladders, and generally being a nuisance by getting in your way and throwing debris at you from afar.

Can I mention how strange the graphical presentation is? Popeye runs at 512x448, which is quadruple the resolution of Donkey Kong, and way higher than NES games and even the majority of SNES and DOS/VGA games. But, only the sprites take advantage of this resolution. Meanwhile, the backgrounds are drawn with huge blocky pixels, much lower in resolution than the tiled stages of Donkey Kong and contemporaries. And so, you have some of the most detailed spritework seen in a video game yet, but they're walking around a scene reminiscent of an Intellivision or Apple II game running in 16-color lo-res mode. 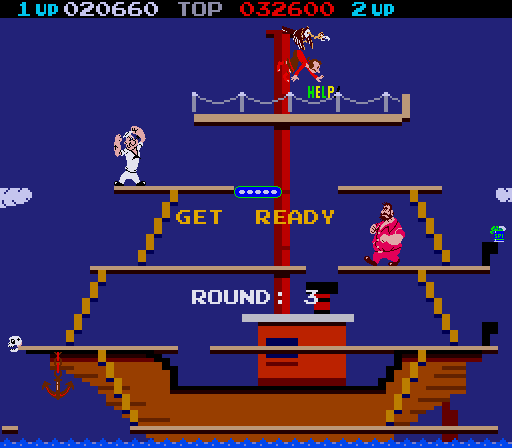 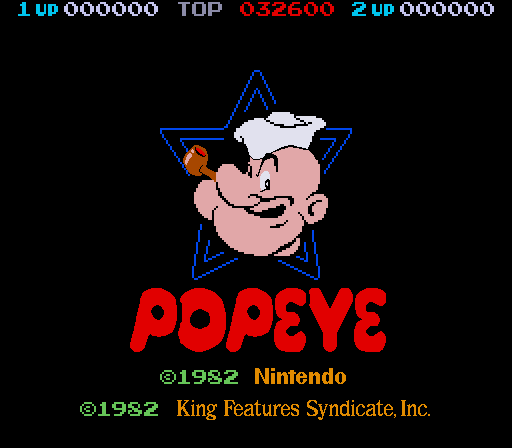 It took me a little while to come to grips with Popeye's gameplay. Rather than waiting for you at a reachable end goal, Olive Oyl tears out her internal organs and tosses them at you to pick up, and will nag you to death if you fail to collect any. There's nothing you can do to finish the stage faster, and you don't have many options for dealing with Bluto. Spinach, of course, makes you invulnerable, but you only get one can per level, its effects only last for about twelve seconds, three of them wasted by posing, and Bluto recovers almost immediately afterward.

I did discover, early on, that the safest place in any given stage is the floor above Bluto. He'll try to knock you down with hopping uppercuts, but these are telegraphed with obvious head gestures. When you're standing on the same floor, his presence denies you access to a good chunk of it, and he'll eventually close in on you, forcing you to retreat up or down. He'll also toss bottles at you, and while it isn't hard to punch them away, sometimes the sea hag tosses bottles from the opposite direction at the same time, catching you in a nearly inescapable pincer attack.

You do not want to stand underneath Bluto if you can avoid it. He will reach down and swat you, without warning. Sometimes you can bait him into a diving clothesline, and if he misses, you can retreat to higher ground as he gets up, but this comes out fast and has surprising reach.

So, you'll want to catch as many of Olive's hearts as you can as high up as possible, not just because this is the safest place, but also because they're worth more at higher altitudes. When Bluto inevitably forces you off your perch, you'll have to descend a level to catch it, and likely be stuck there playing catch-up from a disadvantageous low ground. Grabbing the spinach would be a good idea, as it also freezes her hearts in place, giving you a chance to grab them, smack Bluto, and get back to higher ground. Spinach also doubles the point value of hearts, so you'll want to time it with strategy to maximize the gain.

The first stage has one additional defense measure; a punching bag at the top of the screen which, when hit, will cause a bucket to fall. If timed properly, it will land on Bluto's head, incapacitating him for a few seconds. The best time to do this is immediately after he climbs out of the water after your spinach-powered beating, but I found the timing too tricky to pull this off reliably, and instead preferred doing this as soon as possible.

There are only three stages in total. On stage 2, you'll want to catch most of the notes on the third floor, where you're fairly safe from Bluto as even though he can hop over the small gap in the platform, the wraps around the screen, and Bluto is too dumb to realize this. The platforms below, however, are deadly, and if you're forced to descend to catch Olive's off-key music, you'll want to get back up as soon as possible, which can be done by climbing the stairs or by leaping onto the see-saw where Wimpy loiters around, preferably timing things so that you catch Swee' Pea for higher ground and some bonus points. Spinach doubles these points, so it's good to go for this during your last few seconds under the influence.

In the third stage you have to catch Olive's cries for help until a ladder forms, rung by rung. Punching the vulture is worth a cool 1,000 points, so do it as much as possible. As always, you'll want to be on the top deck as much as possible, but sometimes Bluto will force you down from it.

GAB rating: Above average. Popeye feels like a mediocre Donkey Kong clone, without half of its stage design cleverness or much in the way of interactivity, but there's something about it that made me want to come back and do better than before, which in my case peaked at finishing a single loop.
Email ThisBlogThis!Share to TwitterShare to FacebookShare to Pinterest
Labels: Nintendo R&D1