Some species of the predatory digger wasp have been observed to drag their paralyzed prey to their nest by the antennae, leaving it by the entrance as it inspects the nest before dragging it in. If the prey is moved but a few inches, the wasp will locate it, drag it back to the gate, and inspect its nest a second time. By some anecdotes, this can continue until the wasp starves to death.

Both the accuracy of this observation and its usefulness as a metaphor for the human condition have been disputed, but it's a fitting one for this game, wherein I observed an elvish butler drag Gandalf into the dungeon, fail to re-lock the door, return to the cellar, and ignore me as he helped himself to a glass of wine. Gandalf then simply walked out of his prison and back into the wine cellar, where the butler immediately arrested and threw him back in, ignoring me and my repeated attempts to backstab him. This cycle continued for multiple iterations, until I broke it by successfully stabbing the butler to death.

For my ultimate playthrough, I decided to keep track of actions that scored points. The game never gives you a raw score amount - only a percentage-based value, so after observing that all point values increased this percentage by a multiple of 2.5%, I assumed the actual total score to be 40 points.

I retraced my actions from the previous sessions, quickly sojourned to the goblin's lair, and snatched the ring and curious key. I crossed the lake, and this time the wood elf was nowhere to be seen and therefore not a problem.

On the east side of the lake was a small forest maze, covered in passage-blocking cobwebs. Cutting them with the sword doesn't work. Breaking them with the sword is liable to break the sword. Just typing "break web" usually works, though I had Thorin do it just in case his greater strength allowed this to work more often. One passage led to a literal dead-end as Bilbo wandered and sank into a bog.

On the other end of the maze I found a clearing, with a magic door visible to the northeast which I assumed (and later confirmed via walkthrough) that it led to the elvenking's halls. The west passage from this clearing led back to the bewitched gloomy place, full circle. I allowed the wood elf, who I found patrolling the southern forest region, to capture us, so we could wind up on the other side of the magic door in the elvenking's halls.

The butler let us out, I killed him and took his key. Then I made a discovery here almost by accident - if you escape by barrel without having Thorin with you - easiest way to ensure this is to lock him in the dungeon yourself - you might score four points upon your arrival at Long Lake, and you'll score another four points simply by walking to another location and walking back. You do this by tossing a barrel through the open trapdoor and then jumping onto it. Being inside the barrel and having Thorin toss it through the trapdoor won't work.

After scoring these eight points, I went south to the waterfall, let myself get captured again, and got Thorin and myself out via barrel through the trapdoor. I've noted here that the syntax is agonizingly precise in its requirements, and the sequence is glitchy besides. Giving Thorin an order that the game doesn't understand will simply cause him to not do anything. Having him get inside a barrel which you toss through the trapdoor will result in him getting stuck in the fast river room, a location that you normally just drift past unable to perform any actions in. You've got to throw a barrel through the trapdoor and then order Thorin to jump onto it, and then throw another one through the trapdoor and jump onto it yourself. If all went well, Thorin should wind up alongside you. 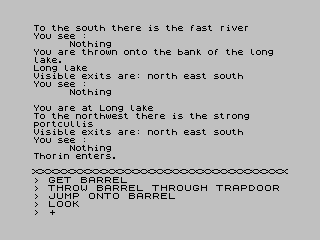 In this final region, I found that Smaug isn't all that aggressive, as long as you don't touch his treasure. Half the time he just walks away, and even if he threatens to kill you, you'll be fine as long as you walk away. At the side door, when the hole opens, you can order Thorin to unlock the door if he has Thráin's key, but it's not necessary; the front gate works just fine.

I carried Bard up to the mountain and ordered him to shoot Smaug dead, and then nabbed his treasure. Leaving south through the waterfall, I killed the wood elf, ensuring he would not bother us ever again.

But what about the spider lurking in the forest, who kept dropping on my head and killing me? I needed a walkthrough for this. Whenever you see the pale, bulbous eyes, you just wait twice before moving, and then you'll be safe. Wait any less or any longer, and you die. I have no idea how you're supposed to figure that out.

One last difficulty awaited me. In the lonelands, east of Hobbiton, the command to go west didn't work! Had I been robbed of victory? Turns out, Bilbo's door was just closed. Open it (yes, all the way from the lonelands) and then you can go home again.

Another oddity I discovered here - Thorin won't go home with you. When I tried ordering him to go west, he obeyed, and then I found out that I couldn't travel west; Bilbo's house was too small for both of us to fit! How strange.

I reloaded, went home, and put the treasure in the chest.

I tried very hard to be charitable to The Hobbit. So many retrospectives have praised it for what it might have been, for what it attempted to be, but in the end all I can evaluate is what it is. Some have praised it for having a rudimentary physics system, but I don't see anything here that wasn't done in Zork, where objects had volume and mass and containers had capacity limits. The manual claims there's a disposition system, but I see nothing more sophisticated than having characters go hostile if you attack, and randomly say "no" when you give them instructions they would otherwise do.

What sets The Hobbit apart is its "Animaction" system that allows NPCs to act as free agents that go anywhere and do unscripted things. This makes the experience strange and at times hilarious, but is completely detrimental to gameplay, and apart from finding characters dead in the goblin maze, it didn't once lead to any developments that were even slightly interesting from an emergent narrative standpoint.

Ignoring Animaction, this is a simplistic, buggy adventure with annoying mazes, few enough puzzles to count on one hand, terse room descriptions that do injustice to the source material, ugly graphics, and a Zork-inspired parser that, while a good deal more sophisticated than the VERB-NOUN schema seen everywhere else, falls well short of Infocom's vocabulary and polish and leads to infuriating struggles with the interface. With Animaction, you have chaos as characters break script and go rogue, disobey your orders, steal your items and otherwise interfere with you, sometimes rendering the game unwinnable through no fault of your own, sometimes even making the game lock up.

Still, better than the movies.


There are a few unsolved mysteries:

The points (all points are scored by entering locations, sometimes under specific conditions):


I'm not quite done with The Hobbit. Before moving on, I intend to delve into its mechanics at least a little bit. Without source code, there's only so much I can do to dissect character behavior and such, but as commenter Torbjörn Andersson noted, there is a tool called Wilderland that shows you character and object properties and locations in realtime as you play, and I'll be wrapping up this retrospective with a final post detailing my observations with it.