I started off this session, having escaped from the goblin's dungeon with the magic ring and Thráin's key, thinking that the ring would allow me to survive the deadly waterfall location. It didn't. 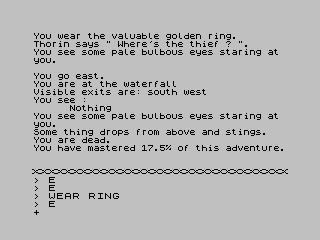 What about Thráin's key? In the mountains, the game had told me of a "visible" passage to the east, but told me "THE PLACE IS TOO FULL FOR YOU TO ENTER" when I tried. Could that be the game's way of telling me there's a locked door there? I tried instructing Thorin to unlock the door, but it was no use. I tried waiting for the moonrise, but it never came. Finally, I turned to a walkthrough, which told me to go to the river and "LOOK ACROSS RIVER" to spot a boat which can be retrieved with the rope. This action is something Bilbo does in the book, but it hardly occurred to me that of all the little details in the book that this game skips over, this wouldn't be one of them. The area past the river, however, was patrolled by the wood elf, and though I could evade him with my ring, Thorin could not, and the walkthrough didn't account for this. So I let myself get captured to see if I could get him back.

This time, the warg was waiting for me in the dungeon, but the spider wasn't, and I killed the warg easily. 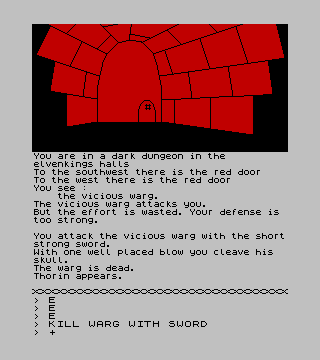 An unknown person - the butler, it later turned out - unlocked one of the doors. I opened it, only for it to get shut again. I re-opened it, and the mysterious person apparently gave up. So I left the dungeon, into the elvenking's great halls, where I found the magic door, and couldn't find a way to open it. To the south lay the wine cellar. 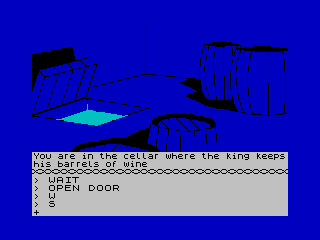 I knew what to do here, but wasn't done exploring. Before I could even do anything, though, the butler, who carried a red key, immediately captured me and threw me back into the dungeon. No matter, the doors were still unlocked, so I just used the ring to sneak around. Once I was satisfied that there was nothing else of interest in the halls, I killed the butler and escaped with Thorin by barrel - a sequence involving some truly stringent guess-the-verb play, made even more frustrating by the fact that when giving orders to other characters, sometimes it fails and you have no feedback to tell you whether the order was invalid or if the character just didn't feel like listening. I was unable to find a non-violent solution that allowed both of us to escape - I could turn invisible and hide in the barrel as the servant discarded it, but found no way to get Thorin in with me without the servant noticing.

The drifting barrel took us down the river and eastward to Lake Town, where Bard stood with his strong arrow. To the south was a one-way passage to the waterfall which had been fatal to approach from the forest, but safe from the north. To the north, past the desolate remains of Dale and Ravenhill, was Lonely Mountain, where Smaug walked around, occasionally threatening me but never making good on his threat. At the side door, a hole would periodically open and close, but I found no way to interact with it. North of the side door was a room marked "The empty place," where attempting to exit eastward produced the familiar but unhelpful message "THE PLACE IS TOO FULL FOR YOU TO ENTER." Smaug's cache was unguarded, but taking it quickly invoked his wrath. 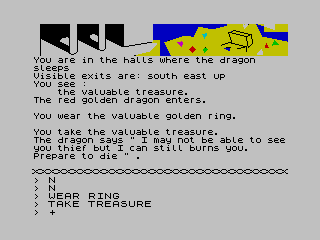 So I skedaddled back to Lake Town, but Smaug toasted me before I could clear Dale.

Reloading, I tried ordering Bard to come with me to the mountain, and he did, though babysitting his every step was, again, frustrating, as he seemed to wander on his own after the initial order to follow. After taking the treasure and getting the dragon to follow me and eventually leading him to the same room where Bard wound up I spent the next several minutes trying to figure out how to get him to shoot Smaug with his special black arrow. "KILL DRAGON" wouldn't do it - in this game, if you specify no weapon, you default to your fists, a lesson I learned back in the Misty Mountains after several unsuccessful attempt at killing goblins despite owning a magic sword. But none of my attempts at being more specific seemed to work either.

I tried something else - I asked Bard to give me his bow and arrow, and he obliged without question.

Shooting the dragon myself didn't work, but the parser did acknowledge the attempt. Guess a longbow is just too much for a three foot tall hobbit to handle.

Then I tried something silly - carrying him to the dragon's lair instead of asking him nicely to follow. Incredibly, it worked. I told him to "SHOOT DRAGON," and this time Smaug died immediately. I was certain I had tried that before. The difference here may be that Smaug wasn't flying this time. I took the treasure, began walking home (Thorin was nowhere to be seen), and then this happened.