July 15th, 1983 marked the domestic launch of the most important video game system in history. It was Japan's first truly successful home video game system, and, when it launched in New York as the NES, effectively hit the reset button on a failing industry, paving the way for Japanese companies to control the market for the rest of the century. Part of its legacy from 1986 to the early 2000's was that "Nintendo" became a vernacular synecdoche for video games even as Sega and Sony offered fierce competition, and to this day the term "8-bit" is popularly associated with the NES and the aesthetic of games designed for it.

The NES was the first dedicated home video game system I ever saw, and the first I ever owned. Although I played computer games too at the time, Nintendo occupied a class of its own in my mind. Computer games offered interactive storytelling and cerebral challenges. Nintendo used the TV, which as far as I was concerned served no other purpose, and was for visceral thrills and dexterous action. Eventually I'd learn of other consoles and would call this niche "video games," but this concept that the NES had evolved into remained for the most part sharply distinct from computer games for decades.

Branded as the "Family Computer" in Japan, it wasn't an overnight success, nor were the launch titles all that impressive in retrospect. The system-defining Super Mario Bros. was still years away, coinciding with its US launch. The majority of its early titles were limited to 24KB of ROM, strictly partitioned into 16KB for the program and 8KB for tile data, and a handful of cartridges doubled the program ROM to 32KB at additional manufacturing cost. The system's powerful scrolling abilities weren't even used until late 1984! For the first year, most of its games, including all of its launch titles, were single-screen arcade style games. Its true capabilities weren't shown until larger games were made, at first made possible through the Japan-only FDS peripheral, and later through inexpensive higher capacity ROM chips and powerful on-cartridge memory mappers.

It's a bit ironic, then, that Super Mario Bros. has often been incorrectly thought of as the system's first game. I thought so for a long time, and viewed it as a great start for the system and a sign of even better things to come. The truth is almost the opposite; Nintendo had been making games for over two years already, thought this was the pinnacle of what could be achieved within the system's 40KB limits, and intended it as the base system's last great triumph before launching their new floppy drive and retiring cartridges forever. The true day one launch titles, which I am going to play, were comparatively much more primitive, while still being more advanced than what the competition of the time offered.

By 1983, Donkey Kong was still Nintendo's biggest seller. There had already been ports by Coleco to the Atari VCS, Intellivision, and of course ColecoVision, and Atarisoft was soon to release ports for the VIC-20, Commodore 64, TI-99/4A, PC, and Atari computers, and if anything these ports just seemed to prop up the arcade unit's relevancy instead of keeping its playerbase at home.

It seems like a no-brainer then, that Nintendo would launch the Famicom alongside an in-house port to put all the previous ones to shame. 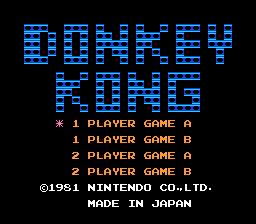 The thing I found most interesting about this version-exclusive title screen is the music, which wasn't in the arcade original. It's the tune Cranky Kong plays in Donkey Kong Country! Suddenly it all makes sense.

Once you hit start, the signature Dragnet-like theme plays, and the gameplay starts. 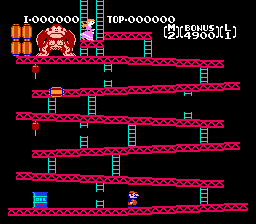 We can already see some corners were cut to accommodate the transition from 32KB to 16KB of program ROM. No intro scene of DK climbing up the construction zone and wrecking it. No "How high can you get?" screen. No blue barrels, although the initial one does set the oil drum on fire. The loss of bells and whistles is a bit disappointing, but console games of the era just didn't have frills when it came to presentation.

This is the best looking home of Donkey Kong anyway, and it's not even close. It's not quite arcade perfect, but for the era it's plenty adequate. Girders are one-tone instead of two-tone, and the color palette is overall more limited, but apart from that the sprites look ripped straight from the arcade game. The screen resolution is the same, only flipped on its side; to accomodate the horizontal orientation the ladder heights have been shortened a bit and the edges of the screen expanded. Contrast with ColecoVision, where one of the floors is completely removed to fit the screen.

And it plays fine. Controls are good and responsive, maybe a bit more so than the arcade original. The lower vertical screenspace does make it just a bit easier.

When you reach the top, the level just ends with some fanfare. There's no animation of DK grabbing Pauline and carrying her up the ladder.

In the Japanese arcade version, you play through all four levels every loop. The US version is weird and gives you two levels in the first loop, three levels in the second loop, and all four starting in the third loop. The Famicom version, which the US NES release is completely identical to, follows the Japanese level order, except for one thing. There are only three levels! The cement factory level, which to be fair was probably the weakest level in the game, is missing completely.

Level 2, formerly known as level 3, makes it a bit easier to survive landings. Maybe the fall code is more lenient here. Or maybe the fall distances are shorter due to the decreased vertical screen space. Either way, this level is slightly easier.

Finally there's the showdown. And you get a proper victory animation once you pull out the rivets.

Overall, this isn't at all a bad conversion of Donkey Kong when you consider how cripplingly limited the other consoles of the time were. The biggest problem is the loss of an entire level, but three screens is still two more than what a lot of Atari VCS games offered. 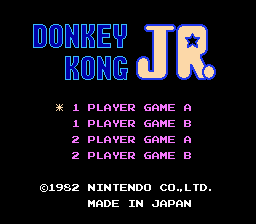 Once again, a title screen offers a version-specific theme and a selection of game modes. And the arcade version's intro animation, is skipped, as expected. 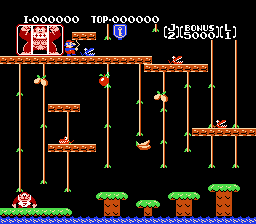 Once again, the level design has some vertical compression to fit the horizontal screen, but the graphics themselves aren't distorted at all. The NES palette here is a bit cold compared to the vibrancy of the arcade game - we can't even get a decent banana-yellow hue here.

But it plays pretty well. Junior even seems to move a bit faster, which does help somewhat with the stiff feeling movement in the original.

The between level transition animation where Mario carts DK away is, as usual, cut out. So is the scene of Junior pursuing Mario's helicopter to his hideout.

What's not cut out, however, is any levels. 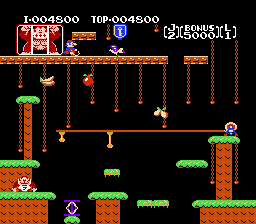 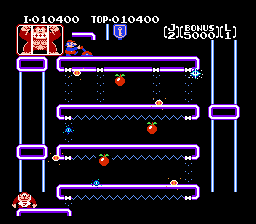 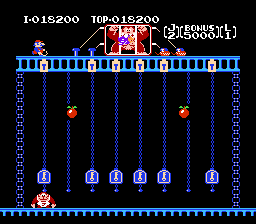 All four levels are present and accounted for! They're easier than the arcade game, even on Game B, but for some that might not be a bad thing.

Free Donkey Kong and you get a victory animation where instead of receiving a gorilla foot to the head, Mario dies!

Like Donkey Kong, this was a day one launch title for the Famicom, and yet it's the better of the two ports. But if Donkey Kong Junior was an improvement, the third launch title wasn't. 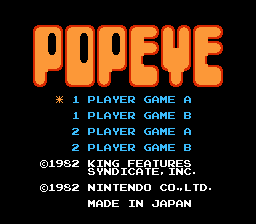 Oh dear, things went so very, very wrong with this port, at least in terms of presentation. To understand why, it's important to recall that the arcade game had this peculiar blend of high resolution sprites with low resolution backgrounds. The sprite animation was the star of the show, giving Segar's characters an expressiveness not often seen in games of the era.

The NES can't do sprites like that unless they're much bigger, so instead we get low-res sprites on even lower-res backgrounds.

It feels like they barely tried. Donkey Kong was so much more animated and expressive than Bluto, who just paces back and forth like a dork, with only a few frames used for attacking Popeye from above or below. His tactics are a lot more limited, and given that he's the main danger, it means limited gameplay. You just avoid him while gathering Olive Oyl's falling hearts. The one positive change is that now the Sea Hag tosses skulls at you instead of bottles. 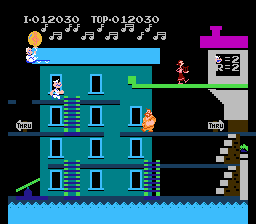 Level 2 is sparse and ugly. The moon in the background is missing. Wimpy is mysteriously absent from the see-saw, making it totally nonsensical when Popeye lands on the elevated end of it and gets launched up to the third story, and though Swee'Pea is present, there's no animation here of Popeye grabbing his floating platform when a jump is well timed.

This is just a lazy port, and if it weren't for the sprites having multiple colors per scanline it could be mistaken for an Atari 2600 game. If Nintendo couldn't do the original sprites justice, they could have at least upgraded the level graphics to Donkey Kong levels of quality, but they didn't. I know the system could do better thant this. Games released literally on the same day were.

That's it for this retrospective on the day one Famicom titles. Donkey Kong Jr. got the best treatment, and Popeye got the worst. They're all pretty decent by 1983 console game standards - they play just fine - but there's not much point when the arcade versions are readily available and so obviously the definitive renditions. All of these would get US releases on June 1986, at which point they were old and hoary and I have to wonder how many gamers still cared. By late 1984, though, the Famicom was the most popular console in Japan, and a handful of early Famicom-born classics had surfaced, which I'll be looking at in the months to come.