With its kid-themed imagery and bright, colorful aesthetic, you might expect Jr. Pac-Man, the final American-made title to come out of the brief Namco/Midway alliance, to be tamer than its famously difficult predecessor. What a sick joke. 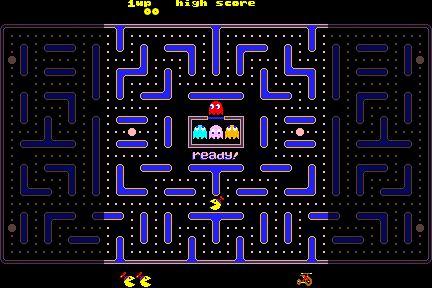 The most obvious change here is the wide maze format, which now takes up about two screens' worth of space and scrolls horizontally. Bigger maze means more space to maneuver, right?

Not really. The monsters are pretty efficient at boxing you in, aggressive as ever, and there are no escape routes. The sides of the levels, once relatively safe, are now among the most dangerous places to be, because you can easily get forced into a corner trap. Sometimes the maze layouts can cause monsters to get lost in an endless loop, giving you a bit of temporary breathing room, but it won't last.

You do get some additional power pellets, but not enough to make up for having nearly twice as much ground to cover. You'll spend more time than ever dodging monsters without any protection, especially as the invulnerability time is drastically reduced as soon as the second maze.

The scoring items - kid-themed items like bicycles, balloons, tin drums, and... beer?... move around the maze like Ms. Pac-Man's fruits, but ignoring them is perilous. Any dots they touch become chewy, slowing Jr. down quite a bit as he eats them, though they are worth extra points. And if they touch a power pellet, both explode!

Jr. Pac-Man, like the previous ones, features cut-scenes in between levels, and they're more elaborate than ever, this time telling a story of young love and antimiscegenation. 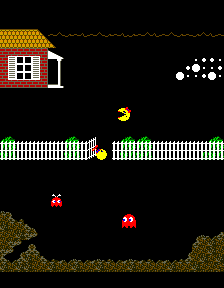 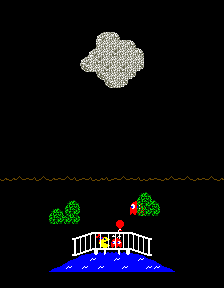 My best effort got me to the fifth maze and scored 60,000 points. Two keys for surviving this long were understanding the monster AI well enough to take opportunities to throw them off my tail when they presented themselves, and also understanding that turning corners slows them down a bit and is sometimes the only way to not get overtaken, since eating dots slows you down just enough that they'll gain ground if you let them chase you in in a straight line.

GAB rating: Good. With its extra large levels, Jr. Pac-Man can feel drawn out compared to his single-screen procreators, but it's no less frantic or fun. The timing of Jr's release, though, just wasn't right. By 1983, American arcade games were in a decline, losing grounds to consoles, and although Atari developed ports to all of their systems in 1984, the company was financially troubled, the home console market's bottom was falling out, and under new leadership by the notoriously ruthless Jack Tramiel, they canceled its release, with only the 2600 port ever seeing commercial distribution years later.

And this really makes Jr. Pac-Man an almost prophetic allegory for the plight of the millennial. Through no fault of his own, he came of age into an era of economic downturn caused by the failures of his elders, lived in the shadow of his parents' accomplishments even as they continued to pull in revenue from a shrinking market, had no chance of enjoying their success and prosperity despite being expected to work twice as hard, and was ultimately cast aside by the whims of the economy and the calculating decisions of an uncaring corporate machine.