With a complete map of Sosaria and several new options available to me, I went with the ones that didn't need money. I explored the two island towns - and nearly got swallowed up by the whirlpool while sailing between them. 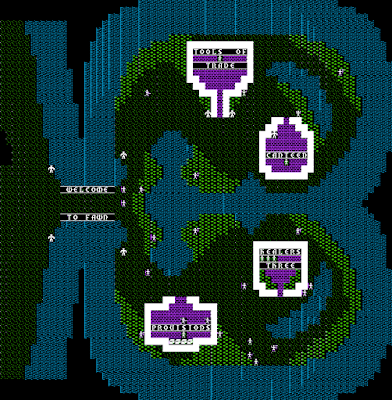 Fawn by the sea was mainly notable for its clues dispensed by the clerics, one of them immediately usable. 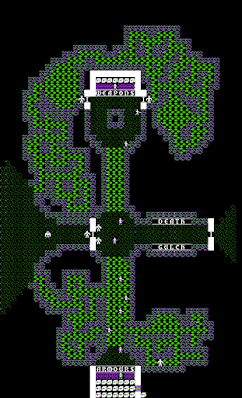 The other island town's terrain did not match its surroundings at all.

Immediately on entering, a daemon warned me "begone fool!" And a guard at the door flat out told me to bribe him.

Exploring the gateway area revealed two forest mazes - both of them pretty time consuming to map out - and the southern led to an alternate way in, where I found weapons and armor shops, and the town's name - Death Gulch. Entering proper, though, would require a key.

I started with Montor West. 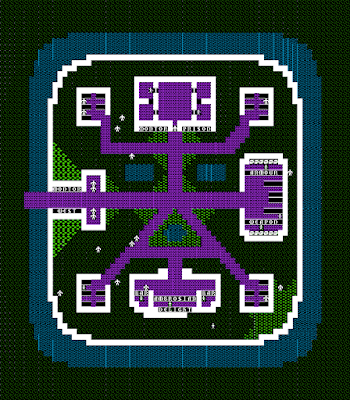 Big surprise - inside the prison are locked cells, housing two thieves. I'd need to buy some keys to interrogate them. Now that's three things I need expensive keys for. The bribing set me back 100 gold, and since towns reset when you leave, I'd have to do it again when I came back.

Next I went to Yew to pray in the circle of light. 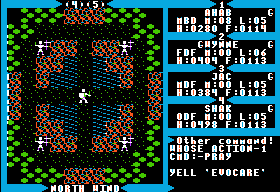 The other hints at Fawn suggested that this was an "invocation," and that something cool would happen if I invoked the silver snake, but when I sailed there and shouted at it, nothing happened. Other clues hinted I might need a mark first.

At this point, Lord British stopped increasing my party's HP, and instead told me to seek the mark of kings.

All of my remaining options now involved money, so I sailed back to the horses and farmed the storehouse in Grey, using poster arthurdawg's advice. With horses, I didn't even need to trap the guards; with careful maneuvering I could simply gallop around them and high-tail it out. Each run got me 200-280 gold and took me about three minutes.

Before long I accumulated 2,000 gold, and then turned around right back into grey to spend half of it on ten keys, and a few hundred more on bartender tips to get some more clues.

And I robbed the storehouse one more time for good measure on my way out.

Next I went back to Montor West to re-bribe the guard, unlock the cells, and talk to the prisoners, and got some new tips from them:

Next I went back to Lord British's castle to see where the locked doors would take me. 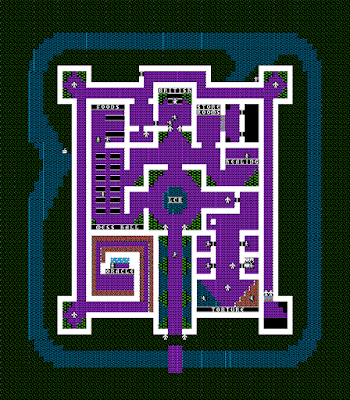 Lord British is operating a torture chamber behind that guarded door! Walking past the cells, two jesters were trapped in pools of water and lava. The one in water was beyond reach, but enduring some burns to speak to the lava one gave a useful clue indeed. 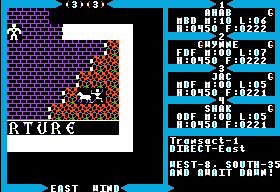 The locked door in the throne room goes to the battlements, and to the left, a spiraling, lava-filled corridor leads to an oracle, where clues can be purchased for 100 gold increments. I would need 4500 gold to hear them all, so I added this to my todo list. To the right, a straight corridor goes south from the northeast tower to the southeast, blocked off by two guards and a force field. One more door going out the back gives access to a frigate in L.B.'s moat, which can be taken to "The Wise Cleric" who just told me "4 cards, 4 slots," which I already heard in Montor East long ago.

Two regions here remained unexplored thanks to force fields; the aforementioned southeast tower, and the store rooms. Something to come back for later.

I took the advice of the jester trapped in lava, and headed 8 squares west and 35 squares south, which took me right into the middle of the forest. When both moons reached their new moon phase, a town appeared. 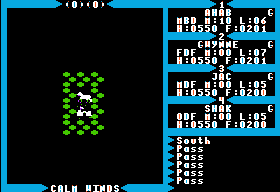 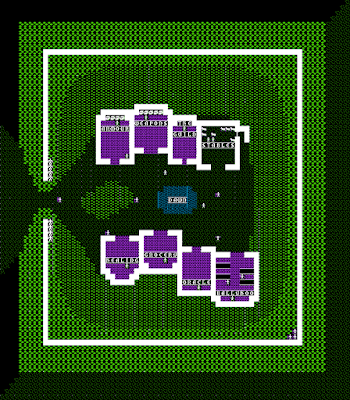 Oh joy, another forest town to spend forever mapping out with limited vision!

Apart from all the trees, this is the best town in the game. Not only is every kind of shop here - oracle included - but the weapons and armor stores sell exclusive - and very pricey - enchanted stuff. The best gear is +2 plate, costing 8,250 gold each, and +4 bows, costing 6,550 each.

But the real reason we're here is for clues on exotics, and they're given by a trio of wizards hiding in the lower-right corner of the town wall, surrounded by trees. The third wizard in the corner is blocked on all four sides, so to talk to him - and his clue is the most important one - you have to kill one of the other wizards first. Even after dispensing with rocket ships and time travel, this series sometimes makes no sense.

I easily escaped from Dawn's guards on horseback. I then searched every tile of every island in Sosaria, and found that exotic weapons can be found on the island immediately southeast of Fawn, and exotic armor in the gulf east of Grey. There's no limit - once you're on the exotic-bearing tile, you can just have every character dig in sequence and get theirs. I equipped the armor but kept my slings for now - I didn't want to give up ranged attacks. Only my druid, otherwise unable to wield anything better than a mace, equipped his exotic weapon.