During my first attempt at Ultima III, my party got their butts kicked before gaining enough experience to reach level 1, so I decided to restart the whole game and rethink my strategy.

The short term goal is to survive long enough to make some headway. You don't have to stick with your initial party all the way to the endgame, so I thought mainly about this short term goal, knowing that later on I could swap out some of my characters for classes with steeper power curves.

My most useful characters had been the thief and the cleric, but the thief wasn't useful for the intended reason; her disarm ability just wasn't as reliable as the cleric's disarming magic. Rather, because her dexterity was higher, she hit more often than my fighter did, whose strength and dexterity were split evenly. Ultima III doesn't show damage output, so it's difficult to say who did more damage overall, but I'd be very surprised if the fighter's increased damage made up for all those misses.

The cleric had three useful spells; turn undead, disarm, and heal (the game doesn't call them that but I do). His next spell, light, is meant for dungeons, but extinguishes so quickly that it's nearly useless, and his other two spells available from the start, ascend and descend, are likewise meant for the dungeons that I hadn't yet the means to delve.

The wizard, on the other hand, was useful only for their mass goblin-killing REPOND spell. Magic missile seemed no better than a physical projectile weapon, fireball cost so much mana that it could only be used once per fight (and rarely killed by itself), and the remaining spells of light, descend, and descend, just like the cleric, weren't useful yet.

So for my next attempt, I decided I wanted a healer, a REPOND caster, and maximum fighting ability. REPOND was available to any spellcaster but the cleric and paladin, but healer choices were a bit more limited. The cleric was an obvious choice as a healer, having the highest maximum MP. Paladins could heal too, but this would require 20 wisdom for a single cast, leaving little left for fighting prowess. Rangers had it even worse, needing 20 wisdom and 20 intelligence, leaving the bare minimum for strength and dexterity, but on the positive side they'd have access to REPOND. Druids, on the other hand, seemed like good early healers, as although they have only half the maximum MP of clerics, they recharge mana twice as fast, and get access to REPOND like rangers do.

I made my next beginner's party consist of a druid and three fighters, with a spread of strength/dexterity distributions to better evaluate their effect on combat. 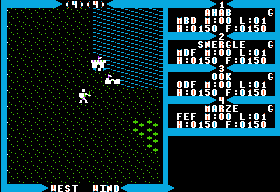 This time, after equipping my druid with a mace and my fighters with slings and leather armor, I ventured southeast instead of northwest. I spotted a town on the other side of an impassable river, and after walking around some mountains to the south, I found an entrance to the other side through some dense woods, revealing an ominous looking dungeon. 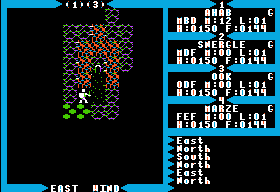 Continuing, southward by southwest, following the coastline, I soon ran into a town, but then realized from the geography that this was West Montor. Sosaria wraps around! The official map lacks landmarks, but does show that there are land bridges on the northeast and southwest corners - and it turns out these are just one land bridge connecting Sosaria to itself.

Outside Montor, I attacked some sea monsters by the inlet to put my party to the test and gather some data. 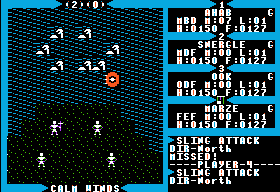 I won, though Ook took a bit of a beating, and Ahab was only able to heal once during the melee. These were my findings:

This is surprising. I thought dexterity would be a bigger deal, but it seems chance is bigger still, enough to override a 25-to-15 advantage entirely.

I crossed the land bridge and continued mapping eastward, following the north coast. Two more dense forests concealed dungeons in the mountains. As I hit the far reach of the map, I turned around and went west, passing Britain, and discovered a nearby town hidden in a dense grove. 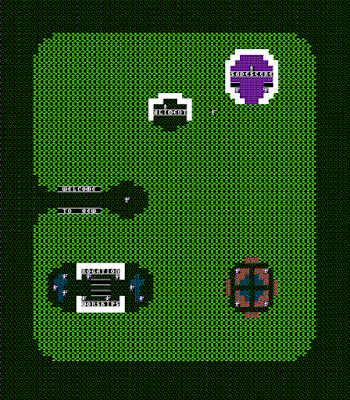 Well, this place wasn't incredibly annoying or anything to map out with its roughly 3,000 vision-blocking trees. All I found for my efforts (and much consumed food) was a healer and food shop - nothing I couldn't get at Britain just to the east - a "circle of light" that burns everyone for 50 HP if you go swimming in the lava, and a whole bunch of clerics giving useless advice like "know ye well thy foes" and "bonim anima teuri," which I guess is supposed to mean something like "I see the good spirit" but translated badly into Latin. Or translated correctly into bad Latin.

I noticed that Ook had reached level 2, but everyone else was still at level 1. Checking their experience points, Ook had exactly 100 XP, Snergle 39, Marze 40, and Ahab a pittance of 19. Seems only the killing blow counts, and strength really does make a much bigger difference than dexterity, and my initial observation about the thief might have been wrong.

Continuing west, I reached a peninsula town south of the mountain range by the land bridge. 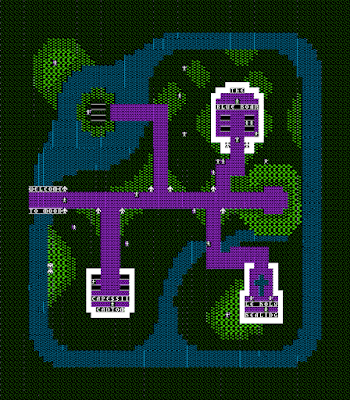 Clues abound in the holy city of Moon.

I'd seen the whirlpool, and knowing I could bribe guards would prove useful in Montor West's prison and perhaps Lord British's castle, if only I had any money. And if I could just figure out where the dark forest is, I had a pretty good idea how to locate the city of Dawn. 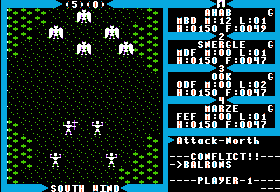 The fun soon came to a crashing halt as I got bushwhacked by a group of Balrons. I beat them, but they poisoned my entire party and didn't leave nearly enough gold for even a single cure. Fortunately, Ahab could stay on top of healing the damage. Unfortunately, just barely, and an encounter with a big group of wizards steamrolled my weakened party. Better luck next time - at least I'm making progress in terms of gathering info.

My partial map of Sosaria, cropped to fit Hawkwind's: 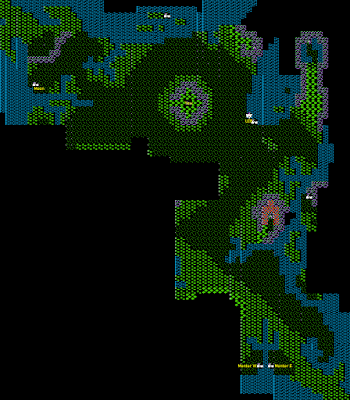