The first sports game I ever covered was Atari's Basketball from 1978. A simplistic one-on-one basketball game, it nevertheless anticipates Electronic Art's One-On-One, which debuted on the Apple II in 1983 before being ported to Atari, Commodore, and IBM computers.

Though still simple by today's standards, One-on-One offers a lot of refinement and bells and whistles, and at least symbolically marks the beginning of the EA Sports dynasty. 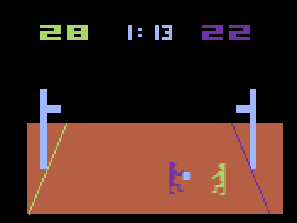 The manual has EA's typically high production values of the day, featuring photos, biographies, and interviews with Julius Erving and Larry Bird, who were consulted during the game's design sessions.

Notably for the time, the players are not identical. Dr. J has better speed and dexterity up close, and superior hang time and dunking ability, while Bird brings stronger defense, better rebound game, and more accurate outside shooting. On the face of it, the advantage seems lopsided in Bird's favor. Standard play rules give the ball over to whoever loses the point, and offense scores more often than not, so victory seems to go to whoever can successfully defend more often than the other guy.

There are a few gameplay options:

The Apple II version also supports Mockingboard music, making it the first such game I've ever seen apart from the Ultima series, playing Maple Leaf Rag during the title screen and options menu, but this is the only time it plays any music at all.

I played a round with "B" following standard rules. He played Bird, I played Dr. J.

We both had some trouble at first figuring out how to pull off an effective defense, but "B" pulled way ahead during the fourth quarter once he did, and neither of us felt like a replay.

Controls, just like in Atari's basketball, are based around a single button joystick, but you can do more things thanks to context sensitivity. On offense, a quick tap spins you 180 degrees, and you can execute shots or dunks by holding and releasing with the right timing. On defense, the button steals or jump-blocks, depending on where the ball is, though the graphics make it hard to tell if a steal was successful or not.

Some other features here are:

After playing a round with "B," I found an almost surefire way to beat the computer in pro mode. Play as Bird, and always take your shots from the three-point line. When you're on offense, they'll usually go right over Erving's head and sink, as long as you move directly down and not at an angle. On defense, go for the rebound when you can, but don't fatigue yourself with too much exertion in pursuit of the ball. The AI as Erving only ever goes for two-point shots, so it's not that difficult to gain a big lead over him through reliable 3-pointers, even if you don't block his own offense most of the time, and even if you miss on occasion. On my first try, I beat the AI on pro mode, scoring over 100 points and flipping the counter.

GAB rating: Average. I'm not really the target audience for this game. I recognize the strides made toward realism compared to contemporaries, but neither "B" nor I had that much fun playing it.

Data Driven Gamer will return in August to wrap up 1983 with Wizardry III!