I've been looking forward to playing Alley Cat on its original platform. Like most of its players, I'm sure, I first played its PC CGA port, which had been programmed as a self-booting disk by the game's original creator Bill Williams, and got distributed widely as a pirated DOS conversion.

Nowadays, I have a better appreciation for how much more well-suited Atari and Commodore computers were for this sort of game, and with cycle-accurate emulators with modern features and conveniences, accessibility isn't a problem. At the time, though, Alley Cat was just a fun little DOS game that I could play for a good hour when I had one to kill, and it happened to work perfectly in Windows XP with no effort.

I spent a few days playing Alley Cat via Altirra. My best attempt cleared three rounds, making it to the fourth and most difficult setting but could not clear it.

The premise is that you, Freddy the alley cat, roam the back alley of the sleazy Catalina Condominiums, hoping to court the local white-coated queen Felicia. It's a dangerous place where vicious dogs patrol the ground level, and should you ascend to the upper levels by hopping from the trash cans to the fence and then grabbing the clothes lines, the tenants will, displeased by all the racket you're making, toss things at you through the windows. You can catch mice up here for extra points, and if you can slip through a window, you'll enter a new area and get a chance to cause some real trouble. Do well enough and Felicia might give you a shot, but first you'll have to get past her six brothers.

Alley Cat on the Atari feels a lot more difficult than I remember it. Freddy moves more fluidly, as you might expect, but his standing hops don't have a whole lot of horizontal travel, and you've got to run a fair distance before picking up enough speed for a leap to count as a running jump.

No place is safe for you either. Stay on the street too long, and a dog rushes onscreen and kills you. Stay on top of a trash can too long and a feral cat knocks you onto the street, where a dog rushes onscreen and kills you. Up on the clotheslines, the garbage thrown at you through the windows is nearly impossible to avoid if it comes out close enough, and will also kill you. And it's easy to fall from your perch thanks to a mistimed jump, or to get knocked down by the mice skittering across the clotheslines, but at least this isn't fatal.

If you can sneak into an open window, one of five minigames plays out. 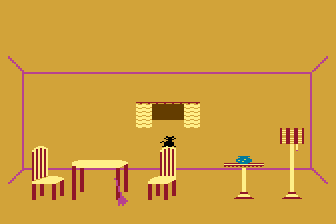 The Aquarium Room is dead simple. Just get to the fishbowl, done simply by jumping from the floor to the table it rests on. A broom here, found in all of the rooms, will chase you around, shooing you out the window, and if you take too long the dog will enter, but reaching the fishbowl should be easy. Once you do, the real minigame starts.

You've got to get all of the fish, don't drown, and don't touch the electric eels. This is trickier than the PC version, as here your swimming controls are heavy and imprecise. Freddy bobs slightly upwards, and fights inertia has he changes directions or stops moving. It's best to go for the easy fish first, and then wait in a safe spot while the trickier ones hopefully move away from the eels. You don't have a time limit; you just need to surface for air when Freddy starts to turn purple.

Succeed in a minigame and you get a time-based bonus, and the next window you enter will be Felicia's lair. 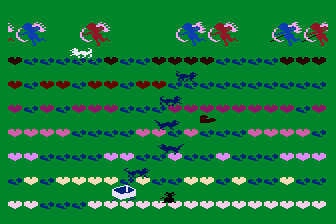 You've got to reach the top platform where Felicia lives, avoiding her brothers which is no simple task as they track your horizontal movements and do it fast. Contact with one knocks you down a platform, and probably right into contact with the one below. The whole time, cupids are firing arrows at you, which turn the heart platforms into broken hearts and then ricochet off the bottom and revert the broken hearts back, which very quickly screws up the platform configuration of the room. You do get a box, which can bribe one of the cats to leave you alone for awhile, but on the harder difficulties this might not be enough unless you get very lucky with the platform layout.

Thankfully, you don't lose a life if you fail, though you will be dumped back into the alley and have to complete another minigame before Felicia gives you another try. When you make it in again, you'll get an extra box to play with, up to a maximum of three. Succeed and you go back to the alley, and the difficulty level increases. 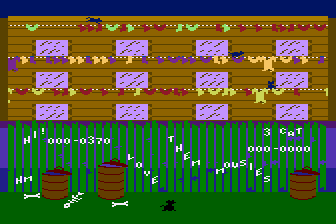 The fourth and hardest difficulty is where my game ends every time. Just getting onto the fence is nearly impossible; only one trash can is high enough to reach it, and the only way onto it is to take a running jump from the right edge of the screen. You're screwed if you're to the left of it; running all the way to the right and running back takes too long to avoid triggering the dog. I've made it into the windows here before, but have yet to finish a minigame. 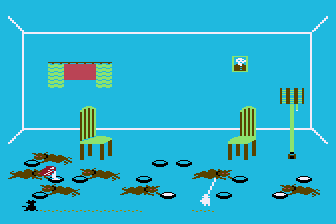 In another minigame, you sneak around a room full of sleeping dogs, trying to drink their milk without waking them up. It's probably the easiest minigame, requiring more patience than skill. Back off when you hear them growl.

The broom makes things annoying, but you can distract it by leaving pawprints on the floor, which works in every other minigame as well. A carton of milk periodically refills the bowls, but once a bowl is empty, it's gone. It's best, therefore, to prioritize the bowls closest to the dogs first, allowing the farther ones to get refilled, as you can easily go for those later. 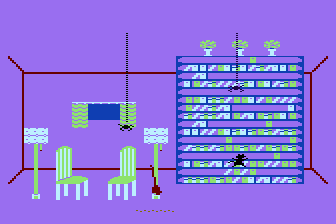 The necromancer's spiders return! The manual even refers to them as the pets of an eccentrick "Nick Cromancer." Climb the bookshelf and knock his prized flowers off the top to finish this room. Mastering the jumping trajectories and understanding where Freddy will and won't grasp the shelves is key to reaching the flowers without touching the spiders. 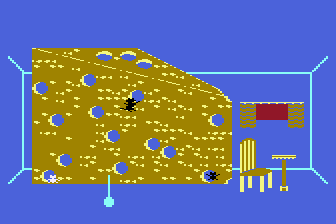 In my favorite minigame, four mice crawl around an enormous and unsanitary hunk of Swiss cheese. Catch them all to win. You can also crawl through the holes to reach tricky areas or even intercept the mice if you know where they'll take you, but the broom will once again chase you, and leaving pawprints to distract it is risky as this attracts the dog. 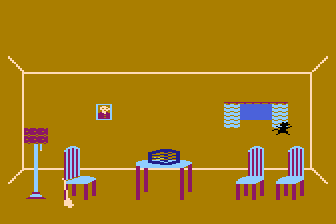 If you're lucky, the broom might knock you right onto the table, where you can just push the cage off of it, but you'll still have to catch the bird afterward. And I just love accidentally jumping out the window while frantically jumping around the room in its pursuit.

Alley Cat is just so charming, original, tightly designed, and fun that I can't not give it a harpoon. It's not an epic adventure that will take days to finish; it's a time waster that you'll play for a few minutes, but they'll always be enjoyable minutes, which is what every arcade-style game strives for, and few achieve. Williams always had a knack for creative ideas, even if they didn't always translate into a playable game, and for the first time, there's enough polish and refinement that they work.

We're done with Synapse Software, which continued to have a prolific, Atari-focused output through 1984, when they were bought out by Broderbund. Williams continued to have a career as a developer up through 1993. His next several games targeted the Amiga, and most were independent works save for Cinemaware's Sinbad and the Throne of the Falcon, but Alley Cat remains his most most enduring classic.