Panorama Toh, the second game published by Nihon Falcom (programmed once again by Yoshio Kiya), is the earliest JRPG I've seen yet, even predating The Black Onyx by a year.

Sadly, I knew quite early on that I wasn't going to be able to finish this thanks to the language barrier. But I gave it a try, just to find out how much of it I could see, in anticipation of the more widely covered Dragon Slayer. 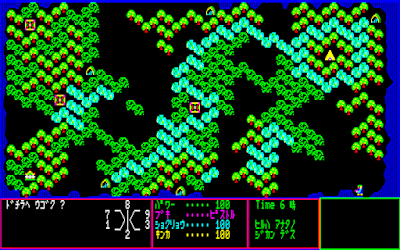 We have a very Ultima-like interface and game world, though the world is hex-based and fits on one screen. I have no idea why I'm here, or what my goal is.

I went exploring, and promptly fell into a pit.

The game prompts you for a command, but unfortunately I have no list of valid ones. Through brute force exhaustion I found these ones got responses:

To the north, a tree bore bananas which I knocked down in a minigame whose rules I didn't really understand.

Further up north, the hexes surrounding the pyramid turned out to be a river. My attempt to walk on water didn't quite work.

I wandered around the pyramid, mapping as I went. 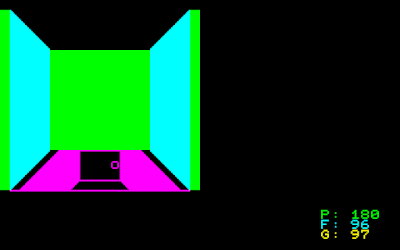 Here and there, I'd find what looked like trapdoors. The 'K' key allowed me to smash and grab something.

Further in, I ran into Dracula, who ate me. 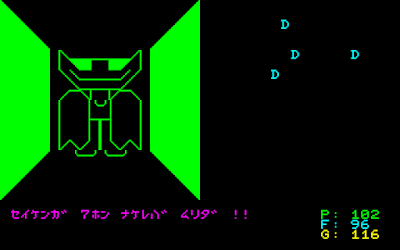 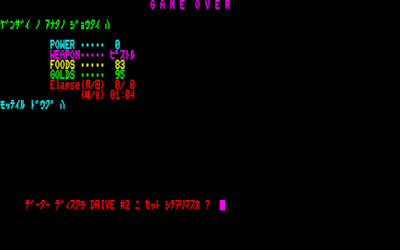 Restarting, and exploring the overworld some more, some other encounters I found included:


I tried to translate what I could here, using Google Translate and my feeble attempts to distinguish the various angled, curved, and squiggly lines in the low-res katakana soup. (updated - corrected my errors from a commenter below)

Incredibly, this guy pays you to take his stuff! Buy the powered suit, though, and it's game over.

I made a few more discoveries, many of them only possible because of the commenter's translation.


This is as far as I expect to get without a manual or a translation. I didn't find anything in the caves except for monsters, minor treasures, and exits to other caves on the island. I thought that the rosary item might let me get past Dracula in the pyramid, but it did not. Either that or I failed to discover the correct way of using it.

As we can see here, this is more than just an Ultima clone, even if things aren't terribly polished or sophisticated (but then neither was Ultima). Despite the primitiveness, we can already see the JRPG identity starting to take rudimentary form, and that made it worth the effort of playing. No GAB rating today - it wouldn't make much sense to rate a game that I couldn't play properly.

The next game isn't going to be Dragon Slayer as originally planned. We've got one more ancestor to cover first.

Predating rival studios Square, Chunsoft, and Atlus by years, Nihon Falcom is said to be Japan's oldest and longest continually operating JRPG developer, if not their biggest or most famous. Founded in 1981 as a computer store, they would sell and later publish software made by their own customers, and by 1989, become put on the international map with internally developed hits Legacy of the Wizard, Sorcerian, and of course Ys, one of the longest-running JRPG series of all time.

Until about 2004, with the release of Sony's PSP, their games had been almost exclusively developed for computers, with console ports of their most successful often outsourced to third parties. The TurboGrafx CD, relatively unpopular outside of Japan, was their most widely supported console. Consequently, they never quite became the major industry player that their prolific back catalog would suggest, and few of their games made whale status, and fewer still attain it naturally. Data Driven Gamer's projected scope is not representative of their decades-long history, and I do not expect to cover series Legend of Heroes, which like Ys, continues to this day and is arguably more popular.

1984's Dragon Slayer, said to be one of the foundational JRPG titles of 1984, seemed important enough to select as a discretionary whale and an entry point to Nihon Falcom. Two prior games seemed important to cover as ancestors, and the first, Galactic Wars, is one we are fortunate still exists. Game Preservation Society chronicles the story of its creation, initially on a Casio computer rented to then-hobbyist programmer Yoshio Kiya, and digital archiving of a PC-8801 conversion. 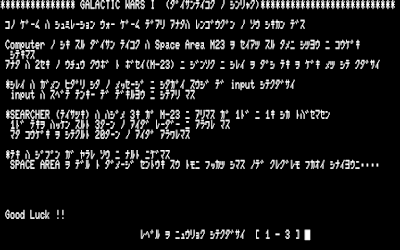 Thanks to Redditor mattarod for translating this, and to Pzychotix for further translating ingame dialogs. Some minor revisions for clarity are my own. 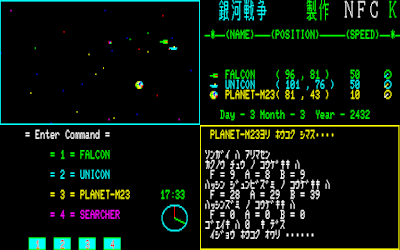 The game is, weirdly enough, a copy of Avalon Hill's Midway Campaign! Planet-M23 serves as a stand-in for Midway, two ships (Falcon and Unicon) are your task forces, and all three are capable of launching aircraft, of which there are three types. Bombers attack enemy carriers, fighters can either accompany bombers to attack carrier CAP or be assigned to CAP themselves, and attackers I assume are like bombers but worse. Or maybe better.

Two additions to the formula make Galactic Wars different. First, the game runs semi-realtime; orders are carried out in turns, but you only have a few seconds per turn to make them. Second, there's an unarmed "Searcher" craft that flies six times faster than your own carriers and can be used to help spot enemy ships. Sadly, I never quite got the knack of using it.

I had Falcon, Unicon, and Planet M23 arm all of their ships - having them below deck serves no purpose as far as I can tell - and send them on a southwesterly direction while the searcher, which isn't listed in the roster and is difficult to see on the map, flew around space aimlessly. Eventually, Falcon encountered the enemy "Alzas."


Some animations played out, and from what I can tell, Falcon got lightly damaged by Alzas' attackers and bombers.

That same turn, "Specter" was sighted. 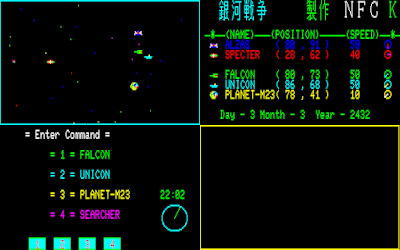 I moved my ships in closer to Alzas, and let all of bombers unload. 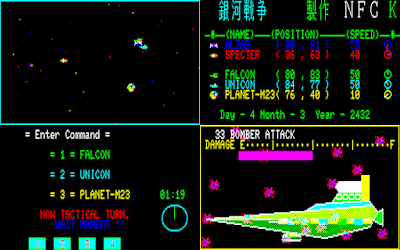 A few rounds later, Alzas was destroyed, but Falcon had been badly damaged in counterattacks, losing half of her fighters in CAP.

After rearming the ships, assigning full CAP to both, and sending them toward Specter, a third ship "Gorgon" showed its face, right in M-23's airspace. 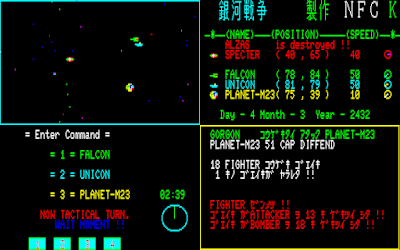 Gorgon did a number on the planet, though it would have been far worse without the CAP assignment, and I retaliated right away, on a now defenseless aggressor. 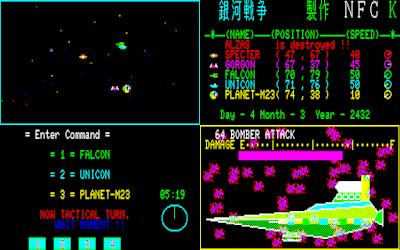 That leaves Specter to deal with. Ideally, I'd want to bait it with the battered Falcon and then wear it down with Unicon.

Something even better happened. Specter didn't even know it was about to be double-teamed, until it was already in range! Its ships apparently were below deck. I hit it hard with unaccompanied attackers and bombers, and unprotected by CAP, did 90% lethal damage in one round, while Unicon shrugged off some token retaliation. One more attack and it was over. 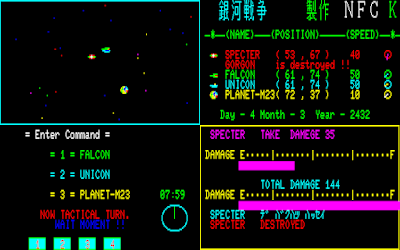 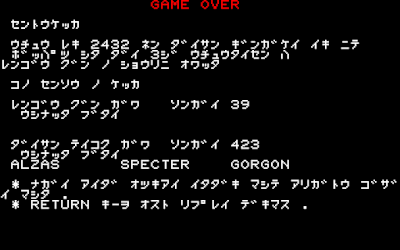 I won handily... on the easiest setting. But I'm okay with not trying again on something harder.

GAB rating: Average. No points for originality - this really is just a copy of Midway Campaign, but the addition of manual searching does make the game better, just not a lot better. The timed rounds, on the other hand, are kind of annoying to deal with, expiring way too soon, and the fact that some of the ingame prompts go away faster than you could reasonably have a chance to read them makes me think this might be a bug or an emulation problem.