You can play Spacewar! for yourself at Mass:werk. Gamepads are even supported.

There is also a high resolution version, though if you use desktop scaling it might not fit on your screen.
http://www.masswerk.at/spacewar/fullscreen.html


Claims of “firsts” are a contentious, controversial issue. I remember that when I was first learning how to read books by myself, I asked my mother what the first book was. Her answer was another question: what is a book? I wanted a simple answer at the time and couldn’t appreciate what a complexly loaded question I had just asked. Reflecting on this question now, I would ask, do scrolls count? Clay tablets? Are we only considering written stories, or do administrative volumes count? Even within these categories, who knows how many milestones have been lost to history? Ask Google what the first book ever written was, and it will suggest The Epic of Gilgamesh as the earliest known work of literature. Would I have recognized it as a book when I asked that question so many years ago? I’m not even sure I know now.

For years, I, like so many other gamers in the pre-Wikipedia age, assumed Atari’s Pong to be the first video game. It made sense; how could such a primitive game have any precedent? But sometime in the early turn of the century, I learned that it wasn’t even the first game by Atari’s engineers, nor was it the first ball and paddle type video game. Nolan Bushnell had cribbed the idea of Pong from Ralph Baer’s Odyssey console closely enough to get sued, and before that created the arcade game Computer Space, a coin operated derivative of the nearly decade-old Spacewar!

Spacewar was created in 1962 by MIT scientists for their newly installed PDP-1 mainframe computer system, and has no evident game predecessor. So is Spacewar the first video game then? Google says no, and will suggest 1958’s Tennis for Two, a ballistic missile simulating computer converted to play a point of tennis on an oscilloscope. Even throughout the early to mid-1950’s, there had been many computer recreations of tic-tac-toe, maze games, checkers, some chess programs, and quite a few simulators of various types. Electro-mechanical pinball and arcade games existed, and used electronic logic in their gameplay to calculate score or make other decisions. But are these really video games? Most of them did not project images to TVs or TV-like monitors, but used indicator lights, or printed feedback to paper, or blips to a radar screen, or even film projection – does that make them incomparable to TV-based video games? Most of them are simulations intended primarily for research of training and not for amusement – does that matter? In many cases, it’s questionable if we can claim a computer is involved in the game processing, but the same thing can be asked of Pong!

I don’t have answers to these questions, but Spacewar is clearly a computer video game to the same sense and extent that Pong is, and more. It uses a true video output, it is processed by a true programmable digital computer with meaningful use of computer memory, and it presents a fantastic game scenario rather than a realistic simulation or a board game translation. But what I find most interesting is that Spacewar presents actual gameplay mechanics which can be studied and analyzed, and which could only be possible in a computer video game. It received wide distribution, and these mechanics directly influenced games for decades to come; not just Computer Space and later Asteroids, but can be seen as late as Star Control in the 90’s. It got people to think seriously about computer video games. I know of no earlier video game of any description to achieve that, and so it seems fitting to begin this project with an analysis of this influential game.


Mass:werk hosts a rather comprehensive set of Spacewar programs, running in a PDP-1 emulator through HTML5. Being a two-player game, I first played it when my friend “R” visited. Each of us controlled a different looking but identically performing spaceship, flying around the computer screen as a 2D plane, with an accurate star field in the background and a stellar mass in the center with a strong gravity field. Ships can rotate freely, thrust to accelerate, fire missiles at each other, and “hyperspace” to teleport to a random part of the screen. R immediately noted the similarity to Asteroids, and remarked on the realistic-feeling physics.

Our first few rounds were trial and error of trying to come to grips with the controls and mechanics. The way the emulator mapped controls to our gamepads, left and right rotate the ship, but down thrusts forward, and up activates hyperspace, which at first just looks like disappearing. R asked “am I dead?” before realizing what happened. Right off the bat, the “sun” in the middle of the screen pulls both ships toward it, the gravity pulling stronger as your ship gets closer, until both ships collide and explode. If one ship touches the sun, it isn’t destroyed, but teleported to a corner of the screen. Mastering the controls is more difficult than in Asteroids. Thrusters are weak, rotation is slow, inertia takes a great deal of force to overcome, and the gravity from the sun disoriented us every time. Reversing directions takes a long time, and may be pointless if you’re going too fast or impossible if you’re too close to the sun. Missiles are slow, tiny, and affected by your inertia, making it very hard to score a kill. On top of that, both fuel and ammo are limited, and if both players run out, it’s a draw and the game restarts.


Eventually we developed some strategies and playstyles. I tended to maneuver quickly and unpredictably, using the sun’s gravity to assist, and fired precision shots at tricky angles. R played more defensively, tried to anticipate which direction I would emerge from, and fired rapid salvos to impede my advance. R used hyperspace frequently, especially after being teleported by the sun, while I used it rarely. Ultimately he scored more points than me, though many rounds ended in draws with both of our ships getting blow up by each other’s shots.

The game allows for some reality-altering settings via “sense switches,” which can be flipped in Mass:Werk’s emulator. The settings are:


There’s also a “Hack Parameters” option that we didn’t play around with much which lets you adjust the internal gameplay variables. 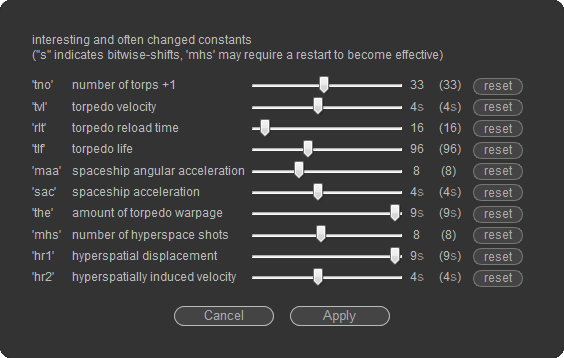 The emulator also has several game variants and versions. The default is “Spacewar 3.1,” which represents the final 1962 version as the original authors left it. Other versions tweak the gameplay variables, add scoring displays, and add cosmetic effects, like this snazzy “Minskytron hyperspace signature.”

Ultimately, we spent the most time with the default version, and had the most fun with it.

Spacewar is impressively sophisticated considering it predates Asteroids by over 15 years, even if it did originally run on a computer the size of a small walk-in closet. It’s incredible enough that it’s even playable today, let alone any fun, and anticipates many properties common to arcade games of the 70’s and early 80’s; action-oriented gameplay, responsive controls, action contained entirely within the confines of the monitor screen, and competitive style gameplay with two players in simultaneous play, with the computer as the rules arbiter, and it did this seemingly without any reference points. Of course it shares many of their limitations and is even outdated compared to them in some ways; there’s no sound, the visuals are crude and monochrome, the game doesn’t even keep score (in the standard version anyway), and there isn’t any way to meaningfully play solo. But there are achievements well ahead of its time too. The Newtonian physics lends itself to strategies that wouldn’t have been possible with a more lenient model. The CRT display, which Mass:Werk clearly took pains to accurately model, flickers and leaves trails, which serves the visuals as stars twinkle and moving objects leave blur trails to show their velocity vectors.

Next entry is about Atari and a selection of their early games.
No comments:
Email ThisBlogThis!Share to TwitterShare to FacebookShare to Pinterest
Newer Posts Home
Subscribe to: Posts (Atom)