Ultima III: Ambrosia can kill you

My last session explored almost all of Sosaria and found the fabled exotics. Only Death Gulch remained mostly unexplored as most of it was behind a locked gate, and I made this my next destination.

Right after I disembarked, a whirlpool sucked down my ship, leaving me stranded. Thankfully I had saved recently, and could just reset and reload without losing my ship or too much progress. I guess you could also recover by dispersing and reforming the party to go back to Lord British's, but the ship would be gone.

Keys and bribe money in hand, I returned to Death Gulch and unlocked the gate to the rest of it. 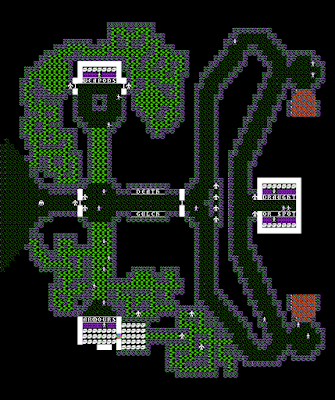 The gulch proper, forming a jagged loop with mountains on all sides, is time consuming to map out, but at least it's more interesting than rows and rows of trees. There's not that much in the gulch - just a bar and grocery store on the east side of it - which I sorely needed to buy more food at. Beyond the gulch is a lava flow that I couldn't explore, having only so much HP to burn.

The real find here is a third forest maze, leading to the armory's backroom, where all the money is kept. Three guards are stationed in the maze, and one must be bribed to allow passage. The armory is divided in half by a force field, but 25 chests can be opened in the back part, and the guards don't even care. Each run took me about six minutes and left me 1000-1400 gold richer and 1 key poorer, and that was just with robbing the eastern half of the armory. If I could find a way to pass the force field and enter the armory's main room, it would be even more lucrative.

After accumulating 7,500 gold, I replenished my keys at Fawn, and decided it was time to leave Sosaria. I set sail in search of the whirlpool, eventually found it, and had to chase it down, a task made tricky not just by the fickle wind, but also by the fact that the whirlpool moves around in realtime while your movement is turn based. 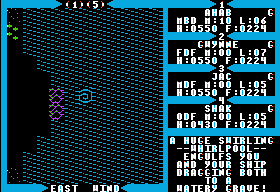 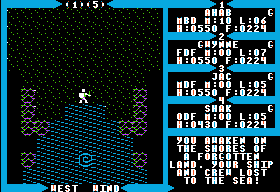 Ambrosia! And lots more of what I was definitely wasn't sick of by now - mazes of forests and mountains! 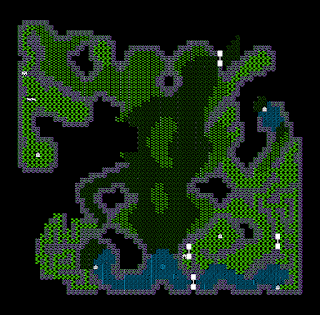 Going northwest first, I traipsed through some open meadows that narrowed into dense woods, where I fought some daemons and then... wild horses? A shrine in a grove to the south yielded a "card of love" when searched.

Exploring clockwise, I encountered a locked door on the north of the map, a forested area that dead-ended, and a forest maze where I saw a second shrine across a body of water that I couldn't cross. In the southeast corner, the trees opened up to a hidden lake where I found and hijacked a boat, taking it across to another shrine which gave a "card of sol." A locked door was nearby, but I left it alone

Returning to the starting area, I found a passage in the mountains to the west, which went to yet another forest maze, and at the end of it was a second pirate ship on the other side of the lake, which I took and parked by the shore where I started.

I then returned to the sol shrine and unlocked the door, seeing no other way to reach the other side. All I found was a group of nasty and poisonous "bradle" monsters, who gave me a sound drubbing and forced my retreat by sailing back into the whirlpool. The rest of Ambrosia would have to wait until I could heal up. 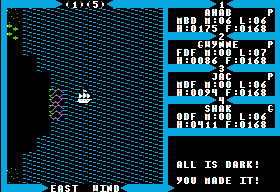 After returning to Sosaria, I went to Dawn to cure my poison, and there I spent most of my leftover money on exhausting the oracle's hints.

Finally, I spent my remaining cash on food. Then I farmed Death Gulch for awhile.

A note here - no character can carry more than 9999 pieces of gold, and if you try to join your gold when your party collectively has more than this, the remainder is lost. I learned this through experience, but fortunately only lost a few hundred.

Before setting out to Ambrosia with a big sack of money, I swapped out two of my fighters for a fresh thief and cleric. My idea was I'd boost their stats for dungeon crawling, then hunt for the mark of force so I could farm Death Gulch even more efficiently. 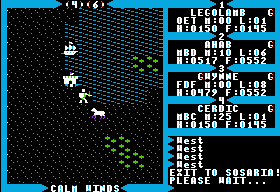 I got them their exotics, bought the thief a bow, and set sail for Ambrosia again.

With my somewhat underpowered party, combat was risky. Enemies hit hard in Ambrosia, and my new characters only had 150HP each. I had to be sure to tank with my fighter, and heal everyone to full after each battle, which felt like it took forever even with two healers. 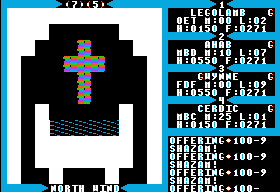 As the oracle hinted at, the reason for your trip to Ambrosia is to find the shrines, not just because this is where you find the all-important cards, but this is also how you truly upgrade your character's power.

Each Ultima up to this point has had a strange and sometimes inconvenient way of increasing your stats - Akalabeth had the Lizard Man spell (and Lord British's quests, but mainly Lizard Man), Ultima had its shrines in the corners of the world, and Ultima II had donations at Hotel California. Here, it's like a combination of Ultima 1 & 2 - you have to find Ambrosia, locate the shrines, enter them, and donate gold in increments of 100 per point boost at the desired shrine. As every character starts with 50 points and each class can have up to 300 total, maxing out every character in all stats would take 1,000 boosts, and cost 100,000 gold. Granted, this isn't necessary at all, as most classes have dump stats. Fighters and thieves, for instance, don't need intelligence or wisdom, and nobody except hybrid spellcasters need both.

I didn't quite make my stats goals for the newbies - although I did find the shrine of dexterity and pumped my thief's dex to the max, and discovered a bit more of the map. To the north was a gulch behind a locked gate, and branching off to the west behind another one was lakehouse, with a big sign saying "AMBROSIA," and jail cells holding bradles, jesters, and a triple-locked area with two dragons. The lake had another pirate ship, which I hijacked and took to the other side, where a a poison attack by orcuses on the other side forced my retreat before I could find the shrine of wisdom and improve my cleric. I did, at least, boost my fighter's strength to 40 at the shrine of strength before fleeing, making her considerably deadlier.

So I farmed Death Gulch some more. I still only had access to half of the loot per run, but my efficiency doubled anyway; by having my 99 dexterity thief take the chests instead of using magic, the runs took three minutes instead of six and I still avoided all of the traps. Eager to finally have a viable cleric, though, I left for Ambrosia after farming 6,000 gold. 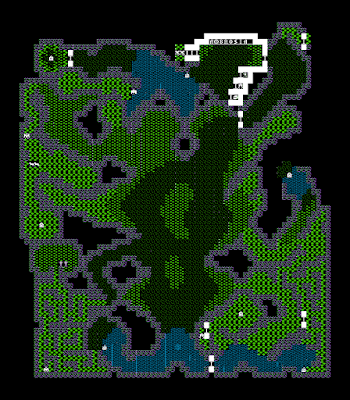 Here I majorly screwed up. I finished mapping out the northern lake area, and its northeast shore led to a grove with the shrine of intelligence. Back at the lakehouse, thinking I could lure the dragons to my ship and blast them with cannons, leaving me free to explore that area, I unlocked the doors. Big mistake - they pelted me with breath, damn near killing my cleric, and certainly would if I tried to retreat. So I fought them - even bigger mistake. The first pack killed him with magic and seriously weakened everyone else. The second pack, which turned out to be griffons, killed everyone else with their own ranged attacks. Total party kill.

Luckily I had my money, so I swapped out the cleric for one of the living fighters, reformed the party to warp back to the castle, and paid the healer to resurrect the rest. Then I swapped my cleric back in and resurrected him. I noticed that everyone had very low HP, so I paid to heal everyone except the cleric, whose maximum HP of 150 made this uneconomical - easier just to heal him with my own magic. Total cost of this misadventure - 2,600 gold, and more importantly, my boat. Landlocked, I guess I had some time to level up my weak cleric and reflect on my own stupidity as a I searched for a new sloop.

My last act for this session was to take the horses, still parked outside the castle, and ride to Dawn to buy my fighter a +2 bow, and spend the rest of the money on food.