I had a third go at surviving Ultima III's early phase. My last attempt went pretty well, and I'm honestly not sure what I was supposed to do about Balrons at level 1, but being a bit stronger couldn't hurt. I was pretty happy with my team of fighters led by a druid, but since I concluded that strength beats dexterity, I gave everyone in the repeat team a 25/15 split. As for the druid, I wasn't entirely convinced of the manual's claim that mana regeneration is doubled, but I tried giving him a 20/20 wisdom/intelligence split to see what would happen.

Sure enough, the druid regained two mana per turn instead of one. My working theory is that the manual isn't quite right, but rather that the druid's mana generation rate is based on the sum of intelligence and wisdom, whereas the ranger's is based on the lower of the two, and all other spellcasters regenerate based on one or the other. Regardless of the exact mechanism, it was indeed useful to be able to cast a healing spell every four steps taken on the overworld.

South of Moon, another dungeon was hidden on the inside of a mountain range, and to the east of it, a large, impassable mountain region was surrounded by light forest. To the southwest, I found another town on a peninsula. 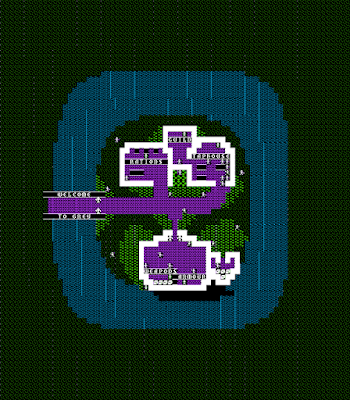 If Yew was a mapping nightmare, Grey is one of the simplest towns, with just one tiny patch of dense forest where a wizard meditates and few other obstructions other than its buildings, concentrated in a compact area inside a large moat.

This place did kill me a few times, though. When entering the storeroom east of the armory, a brigand attacked, but I killed him easily and helped myself to the treasures. Big mistake - this brought the guards down on me, who attacked as I tried to leave, killing us easily. After a quick party re-roll I went right back to Grey, then realized I forgot to buy slings and leather armor. When trying to sell my cloth armor to pay for leather, I accidentally hit 'S' for Sell too soon, and the game interpreted that keystroke as "Steal" instead. I thought maybe I could cancel the order by stealing in a direction where nobody was standing, but no luck. The guards saw me trying to rob the floor, and flooded the shop, our backs to the wall with nowhere to run, and without even meager starting equipment.

And on a third attempt, I learned that merely fighting the brigand alerts the guards. Even though he attacked me! So don't go in the storeroom.

Grey has the usual amenities plus one I hadn't seen yet - a thieves' guild! Here, you can buy keys, mapping gems, torches, and time powders, but torches don't last and everything else is crazy expensive.

A few tips from the locals:

I get it, guys. Find Dawn, get exotic weapons.

Back in Sosaria, I went east, around a gulf, and mapped out the last land-based area on the overworld; a medium-sized forest of dense trees. A clearing on the west side had a dungeon, and a clearing on the south by the coast had a moongate! 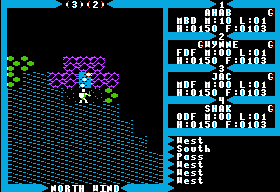 I went in, and emerged... exactly where I entered. I noticed the moon patterns, which dictate moongate behavior, were at (3)(3), indicating that Sosaria's twin moons were both in the gibbous waxing phase. The gate closed soon after, but I stuck around and it opened again at (3)(1).

Some playing around and I discovered the rules that govern the moongates.

By riding the moongates, I found some of their locations and marked them on the map. Two were in places that I could have always accessed. One was on an islet on the other side of a river that I had seen before but couldn't reach. A few were deep within the mountains, and therefore impossible to chart their locations exactly, though one was cavernous enough that I was sure it had to be the large mountain region east of Moon, and a new town was in here.

All of this waiting around, though, depleted my food dangerously low. I employed a slight cheat, though one that would have worked on real hardware. By rebooting, dispersing and reforming your party, you regroup right outside Britain, where you can buy food and whatnot.

Incidentally, the gate that opens with the new moon is by Moon. And entering when both moons are in the new phase just teleports you right there again. I thought I was onto something with the "Dawn comes with each new pair" clue, but apparently not. There was another clue in Moon that said "Dawn rises in the dark forest," but where? You can barely see there, and the (0)(0) phase combination only lasts four turns.

But I had one new place to visit. I farmed some gold without issue, earning a shiny new bow in the process, stocked up on food, and rode the moongates back to the town surrounded by the mountains. 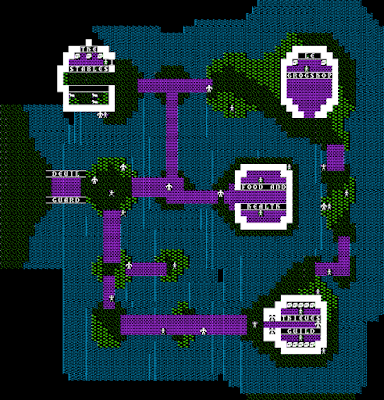 Devil Guard had another Thieves' Guild, and also a stables, but at 800 gold for a set of horses I just couldn't afford them. I had yet to accumulate even half that much, and what I did earn mostly got spend replenishing my food.

Most of the clues around here concerned marks:

I farmed gold to save up for the horses. Faster travel meant less food consumed, which would mean less money spent buying more food. The investment would even pay compound interest, as merely walking through a town to buy more food also consumes food. Poison was still an issue, as my only means of curing was to spend 100 gold at the healer's, but it became less of one as I learned to avoid the ocean, where the sea monsters that spawn never drop gold anyway.

While farming, my fighters leveled up twice, but my druid hadn't leveled up at all. Although his healing magic coupled with double mana regeneration had been fantastically useful, he was weak as a kitten and hardly ever able to land killing blows with his mace or able to withstand much damage himself, and the few experience points allotted came from successful casts of REPOND and PONTARI - the zero-mana spells that mass kill goblins and undead. And so I made it a conscious habit to enter combat with full mana whenever possible, and try to coax a few druid kills with his magic missile spell. Often, when the enemy was down to the last man/monster, I'd let my healthiest fighter tank hits while letting the druid regenerate mana so he could have the last kill by magic missile. He lagged behind, but I did manage to get him to level 3 by the time I could afford horses.

Speaking of which, the only benefit I noticed to leveling up is an increase in maximum HP, equal to 100*LVL + 50. You must speak to Lord British to receive it.

After buying horses and a big mess of 1,000 food, I considered my options for progress. Most of them involved spending money, and the few that didn't seemed unfeasible.

Farming for more gold seemed like the best next step to maximize my available options. While doing this, I saw a ship! 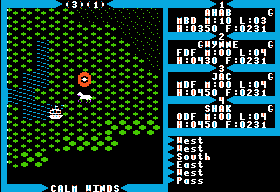 So of course I killed its crew and took it for myself. 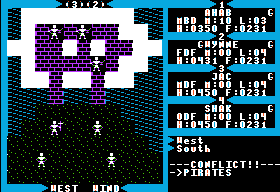 Sailing is a bit frustrating. If the wind isn't blowing, or if it blows from the direction you wish to go, then you must wait until they change. Although you have mighty cannons, enemies killed with them don't drop money, and if they attack you, then you'll have to fight from  a cramped boat with little maneuvering room - a dangerous proposition against spellcasters who can hit you from anywhere while your individual party members trip over their own feet and each other, trying to line up a shot from the confines of the deck. You are seriously screwed if you encounter sea serpents and don't have ranged weapons equipped.

With the ship, I explored and mapped the remaining parts of the overworld. A few locations were still inaccessible, and I reckoned these were the moongated areas. One such area was blocked off by a huge snake, and a castle in the middle of a lava moat lay beyond.

Two island towns, previously seen but not accessible, can now be reached by boat, and the whirlpool express to Ambrosia awaits as well. I remember enough from my previous playthrough that I know Ambrosia is where real meaningful character stat development happens, but it costs a lot of money, and right now I don't have any money, having accumulated about 600 gold while exploring the last corners of Sosaria and spent all of it on more food.

My map, finished and probably accurate: 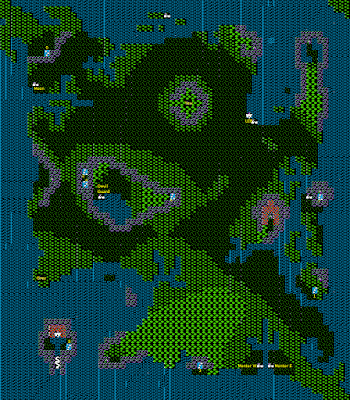