Download Jeff Minter's back catalog, including both of these VIC-20 titles on the "Llamasoft Baachive."
https://llamasoftarchive.org/systems/commodore-vic20/

Llamasoft's founding coincided with Minter's purchase of a shiny new Commodore VIC-20. Intended as a budget personal computer with game-specific features, the VIC-20 was the best-selling computer system in its day. Nowadays, the Apple II, Atari 800, and of course its successor the Commodore 64 completely overshadow it. With only 3.5KB of available RAM and only one video mode, which is essentially a hacked 22-column color text display, the VIC-20 seems weak compared to the much more expensive Apple II. However, Minter was coming from the ZX81, which was incapable of displaying anything but monochrome text in the system ROM font, and merely outputting a video signal was such a strain that programs often deliberately shut off the video signal when it wasn't absolutely needed just to speed up program execution. The fact that the VIC-20 had any dedicated video capability must have made it seem like a gaming powerhouse in comparison.

Like the ZX81, the VIC-20 technically can only display text, and only in an 8x8 monospace font, though it has access to 8 foreground colors and can assign each individual character cell any one of these colors, which is something other computers of the time couldn't do. Graphics work by redefining text character bitmaps, and the results are similar to arcade games' tiled graphics.

That's a screenshot of the first ever Llamasoft game.

I used VICE to play this game, and in order for it to work, you must enable the 8KB memory expansion option, found under Settings->Settings->Machine->Model. After that you can just smart-attach the PRG file and then type "RUN." 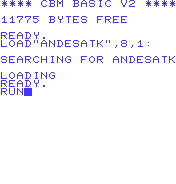 The original cassette version had a loading screen, which is skipped over when directly loading the PRG. 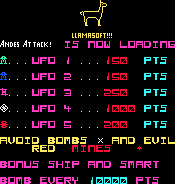 After about two minutes, the game would start proper.

It sucks. It's like an extremely stripped-down version of Defender, with unresponsive controls, ugly, flickering visuals, bad play mechanics, and llamas instead of people. Sometimes your shots pass right through their targets, sometimes landers spawn right in front of you and you blow up before you even notice they're there, and overall I had more fun configuring my OBS settings than I did playing this game.

If you actually want to play this, know that although it controls primarily with the joystick, there are also some keyboard controls. F1 changes difficulty, and F8 fires smart bombs.

Minter's most famous game, and the whole reason for doing this early Jeff Minter retrospective, was also originally designed for the VIC-20, but soon ported to the C64, Atari 400, ZX Spectrum, and Dragon computers. Commodore 64 was probably the most popular platform, but I'll be playing the original VIC-20 version. 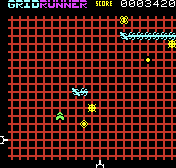 Gridrunner feels a lot like a second attempt at making Centipede, but it works better this time. Minter's Centipede and Andes Attack both operated on a chunky grid system, and suffered in comparison to their arcade game counterparts. Gridrunner embraces this format - the game's called Gridrunner for crying out loud, and proudly puts its grid on full display. Everything in the game - you, your shots, the centipede segments - exist on discrete points on this grid, at the exact points where the lines intersect. Andes Attack felt choppy, but Gridrunner feels fast - faster than Atari's Centipede.

Gridrunner is still stripped down compared to Atari's Centipede, lacking any enemies other than the segmented things that zig-zag down to the bottom row, but there are a few tricks unique to this game. Most notably are the two turrets on the grid's X-Y axes constantly moving in a scanning pattern. The vertical turret doesn't directly threaten you and only fires obstacles onto the grid, though some of these obstacles will eventually come crashing down if not shot out of the way first, changing into a black diamond pattern first. The horizontal turret will periodically fire an electric blast, killing you instantly if you happen to be on its longitudinal line, but will also kill centipede segments. It's difficult to predict exactly where and when it will fire, but you can stay safe by staying to its right until it fires, and slipping past it immediately after. Doing this consistently when your attention is divided is still very difficult, though.

GAB rating: Above Average. Definitely Minter's best early game, Gridrunner looks and sounds really good considering the system's limits, and its fast-paced, sensory-overloading gameplay is addictive as anything on contemporary systems. Gridrunner isn't perfect - collision detection can be spotty, getting zapped right out of the gate is a frustrating and random occurrence, and centipede behavior can be unpredictable when the obstacles get dense enough. The gameplay is simplistic, relying more on speed and reaction times than I find ideal. Nevertheless, it kept me amused for a good hour and a half as I felt compelled to keep topping my score, and I'm sure that if I had been limited to the VIC's 1982 library, this would be one of my most played games of it.

Gridrunner was a hit, and would be followed up with successors like Attack of the Mutant Camels and Voidrunner, and in the 21st century received Windows reboots Gridrunner++, Gridrunner Revolution, and ports to iOS. We'll be moving on, though - only the original Gridrunner made whale status, and we won't be seeing Llamasoft again until the very distant future of 1994.
Email ThisBlogThis!Share to TwitterShare to FacebookShare to Pinterest
Labels: Llamasoft