The Hobbit: Overkill under hill

The adventure genre's biggest weaknesses, in my book, is its inherent immutability. Once you finish the game, you've basically seen everything. A replay is only going to have the same map, the same plot, the same scenarios, and the same solutions. Adding alternate paths and solutions can extend replayability, but only finitely.

Designers recognized this early on - Rogue's readme specifically documents that this was the motivation behind its creation - but others came up with a variety of ways to work around this while still working within the genre's template. As early as the original Adventure, the most unpredictable aspect was also the most annoying one; the dwarves who will randomly show up and possibly kill you. This continues with Zork's thief who wanders around the maze, stealing your breadcrumbs, and shanking you, to being constantly harassed by wolves, wizards, and dwarves in King's Quest, and so, so many forced games of chance in later Sierra titles.

The Hobbit's "Animaction"system, intended to ensure no two playthroughs are the same, is more inexplicable than annoying. It seems like almost everyone goes where they please and acts on their whims. Gandalf keeps showing up, taking my map for no reason, only to later give it back or drop it on the ground somewhere. One time I opened a door to the troll's cave, and Gandalf just magicked himself to my location, shut the door, and left without saying a word. Another time Thorin got stuck in a dungeon with me, and refused to open the obvious escape route when I asked him to, but did it immediately when I asked him a second time. Yet another time, while stuck in an elvish dungeon, the butler unlocked my prison cell from the outside and then just wandered off. Zork's thief might have been annoying, but at least his actions made sense!

Picking up from where I left off - in the troll's cave, where their treasure consisting of a rope and short sword, I journeyed to Rivendale, where Elrond could read the map, and pointed out that it said "go east from the forest gate to get to the bewitched gloomy place." I continued east through the Misty Mountain, collecting the golden key in the deep valley, and went past the forest gate where I got captured again. This time I could see, no doubt thanks to possessing Sting, but more emergent behavior occurred to my disadvantage. 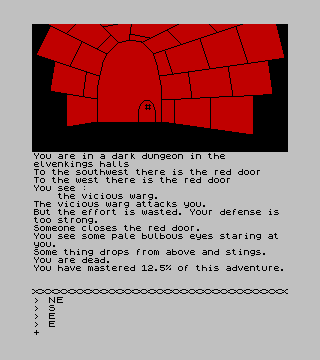 So instead I tried getting deliberately captured by the goblins. This was more true to the book after all.

In the goblin dungeon I found trapdoor buried in the sand, but it was locked, and neither of my keys opened it. A window was out of reach, but I could somehow tie my rope to it just fine, but couldn't get the parser to recognize any further actions that I thought of doing. After a restart, I found I could have Thorin smash the trapdoor, revealing a key (he took it), and open the window - both things I had tried before. Apparently I broke the game by tying my rope to the window.

Thorin could be ordered to carry me through the window. This led to yet another MOTLP of dark stuffy rooms, crawling with goblins of various identifiers such as "nasty goblin," "hideous goblin," and "mean goblin," who would just show up without warning and carry me back to the dungeon. Killing them with Sting was easy - in the event that I encountered one who didn't capture me immediately - but did no good. Half of the time the "dead" goblin would just capture and drag me back to the dungeon anyway, and the other half of the time it would just appear in the adjacent room and walk right back in to be killed over and over again in a repetitious cycle. The best approach was to walk past them. In any event, each time I got captured, Thorin soon followed, and could be ordered to carry me out the window as before.

While exploring, Gandalf showed up once, did nothing useful, and left. Soon, I discovered Gollum's corpse! His magic ring wasn't too far away, which was immensely useful for navigating the maze unmolested, but not perfect. The invisibility effect expires after a seemingly random duration - five to nine turns on average by my estimate - but the game doesn't tell you when this happens, so you must keep typing "WEAR RING" every now and then or risk getting captured. Amusingly, retyping this command before the effect expires produces the message "I DO NOT SEE THE RING."

I found the underground lake in this maze. Nothing of interest lurked there; Gollum was dead and the sequel hook with him. Mapping out the maze got increasingly difficult, as it dawned in on me that the layout was utter chaos. In a dead-end, I even found Gandalf's corpse! Thorin was nowhere to be seen, but I eventually found the exit, leading to the dry cave in the mountains. Returning to map out more cave, I got captured again, found Thorin sitting in the dungeon singing about gold, and shortly after the game locked up.

Restarting again, I retraced my steps, and re-mapped out the maze, this time using Excel instead of Trizbort. This time Gollum was quite alive as he wandered around the maze, but all he did was bleat "What has it got in its pockets?" over and over again. His ring was carelessly discarded in a random passage, and after getting it, I finished my Excel map, discovering another way out which led directly to Beorn's house. I went back to Thorin and baby-sat him as he followed me, step by step, out of the maze.

I transcribed my Excel map to Trizbort, but only partially, including all rooms but leaving out a great deal of redundant passages that simply weren't possible to graph in a sensible manner.