Download Jeff Minter's back catalog, including both of these ZX81 titles on the "Llamasoft Baachive":
https://llamasoftarchive.org/systems/sinclair-zx81/

If you've ever heard of Jeff Minter, you know that ruminating ungulates are his thing. He founded and continues to operate Llamasoft Ltd., references his favorite animal kingdom order in his games constantly, often goes by the handle Yak, etc.

Before founding Llamasoft, a developing house which at first focused on creating Commodore VIC-20 games, Minter's earliest commercial releases were through dk'tronics and released on the ZX81, a budget computer that I touched upon briefly with my post on Football Manager, and one that makes the VIC-20 look luxurious in comparison.

Supposedly, Minter programmed Centipede without playing the original, and I believe it, although its deficiencies as a Centipede port could just as easily be excused by the system's limitations. Without getting into too much technical detail, the ZX81 just seems inadequate for doing much of anything except running text-only BASIC programs (like Football Manager), and even then, only with a 16KB RAM upgrade - the stock 1KB isn't enough to hold 20 lines of code and display all of them on-screen at once!

As for Minter's Centipede, overall it plays more like Space Invaders than Centipede. You still face segmented invaders (who, unlike the original, fire shots back at you in later stages), but you can only fire one shot at a time, and you can only move left and right. Consequently, there's no strategy here - funneling the centipede is pointless thanks to the one shot limit, and once it reaches the bottom row, you're bug food.

Controls are surprisingly responsive, but collision detection is spotty, and missed shots can act as barriers, bringing the centipedes ever-closer to the kill zone.

The game does offer instructions, and you can customize the starting speed, but the slowest is already difficult enough. The fastest is ludicrous.

GAB rating: Below Average. Here, I feel like context must be considered. Minter's Centipede plays poorly, but not offensively so, and was a budget title made for a budget computer. If I had lived in the U.K. in the early 80's, owned a ZX81, and was limited to the software available, I could see myself replaying this game, which is something I can't say about, say, Asteroids on the Atari VCS, or the much more expensive Apple Galaxian. As I'm not limited to the ZX81's library, I am happy to never touch this again.

Minter himself describes this other early effort as "a really bad 3D Maze game [...] balls-achingly slow making it pretty much impossible to play by creatures with metabolisms that run on a normal human timescale." Jolly.

3D! 3D! is exactly that. It's set in a randomly generated cube-shaped maze divided into 9 floors of 9x9 tiles, which you explore from a first person perspective. The controls are a bit counter-intuitive, giving you the ability to "look" in any of 6 directions and then "move" forward, but as Minter says, what mainly characterizes this game is its horrendously slow 3D drawing routine.

There's a "fast" mode and a "slow" mode, and it defaults to "slow." You may wonder, why even have a slow mode? Well, the ZX81's predecessor, the ZX80, was not designed to run a program and output a video signal at the same time. Typing characters into a BASIC prompt was excruciating, as the screen would flicker off with every single keystroke as your computer dedicated all of its CPU cycles to reading the keyboard input, fetching the corresponding byte, and writing it to the display RAM, and would only resume sending the video signal once this process finished. Clever programmers found ways around this by carefully timing program execution during the milliseconds when a video signal wasn't needed, but this wasn't efficient, and wasn't possible at all in BASIC mode. Recognizing this flaw while designing the ZX81, Sinclair Research added a "slow" mode capable of handling video and code execution at the same time, but, befitting the label, program execution is much slower in this mode.

ZEsarUX cheats by enabling video in the emulated "fast" mode, and this makes for a comparatively superior user experience.

With this option disabled, the screen in fast-mode simply shuts off until the 3D drawing routine completes, as it would on real hardware.

With this fast mode on, it took me about 40 minutes to find the exit to the maze, even with spending as much as 20 seconds per step, and a good part of that time was just spent coming to grips with the perspective and controls. 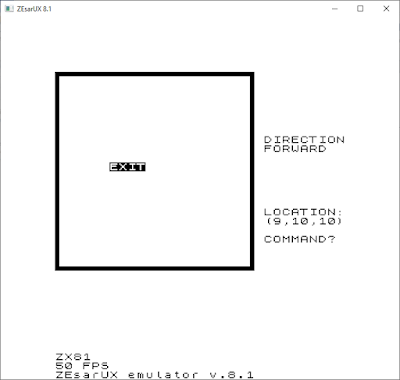 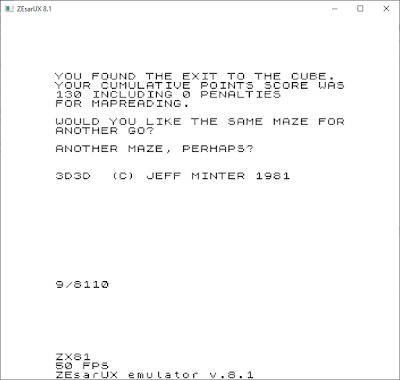 Overall I had explored very little of the maze; the path to the top was straightforward, some of the levels could be skipped entirely, and I never once had to descend a level.

GAB rating: Bad. Minter is right in his description - this is a really bad game. If the 3D drawing routine had been fast, this would still have been nearly bereft of any interesting gameplay - the 3D aspect might have made it slightly exceptional, but the lenient random generation algorithm makes it essentially work out as nine easy 2D mazes instead of one challenging 3D maze, which would have been preferable if not for the slooooow drawing speed.
Email ThisBlogThis!Share to TwitterShare to FacebookShare to Pinterest
Labels: Llamasoft