Beam Software was the internal development studio of Melbourne House, a British/Australian publishing firm who had by the early 80's diversified into computer games, becoming Australia's first such publisher. Mobygames lists these as the same company, but they seem to have fairly consistently separate roles, with Beam Software often credited with development or porting jobs of games not published by Melbourne House, and Melbourne House occasionally publishing or localizing games not made by Beam Software. Their earliest credits on Mobygames are Double Breakout and Super Invasion; clones of Breakout and Space Invaders on the ZX80. Presumably these were released domestically by Melbourne House, but the only publishing credits listed are for 1981 international releases by Softsync Inc and The Essential Software Co.

I couldn't get these games to work by emulation. Granted, I didn't try very hard - I was not enthused at all about playing yet even more derivative games on the ZX81's crappier older brother.

Beam's earliest whale, then, is The Hobbit, published the following year in the UK for the newly-released ZX Spectrum microcomputer. This was another budget machine intended to succeed the ZX80 line - the unexpanded 4KB VIC-20, considered a budget computer in the US, cost £200 in the UK, whereas the ZX Spectrum cost £125 for the 16KB model and £175 for the 48KB model. This machine and its games had a regional cultural impact that I'm totally unqualified to discuss - I'm tempted to compare it to the NES's impact in North America, but even that may be selling it short. The NES was merely a games playing machine, whereas the ZX Spectrum, like other microcomputers, came with the tools needed to create its own games in BASIC and machine code, and is responsible for a generation bedroom programmers who developed and distributed games of their own, not to mention the national pride that so many British gamers must have felt owning a homegrown computer, and using it to run homespun software.

The manual opens with some blatant puffery, needless considering the user reading it already bought the game:
Congratulations! You are about to play the most sophisticated game program yet devised for any microcomputer.

Melbourne House in association with the Tolkien Estate are very proud to be able to present to you THE HOBBIT, an amazing program based on J.R.R. Tolkien's brilliant fantasy novel.

You are Bilbo Baggins, and your wizard buddy Gandalf talked you into helping Thorin retrieve a dragon's treasure. You know the drill, I'm sure. The meager plot section emphasizes hobbits' diminutive size and lack of innate magical talent, as a warning that most creatures you encounter will be bigger and stronger than you.

Gameplay mechanics are described as very similar to Infocom's titles. One notable difference which I'm completely sure is taken from Scott Adam's adventures is that the game screen is split into two windows, with the top window displaying graphics, text descriptions, and ingame events, while the bottom window displays anything only related to the parser.

There are a number of rules which should be familiar to Infocom players:
There's one new rule - while Zork had combat that could sap your strength when you took damage, Bilbo gets weaker just from fighting. Resting won't be enough to restore your strength either; you've got to eat.

The manual also touts a system called "Animaction," boasting that characters such as Gandalf and Torin are free agents, who travel on their own, perform actions on their own, and interact with the world and other characters on their own. Their own disposition toward you will change depending on your actions - talking too much or making too little sense, for instance, may disincline them to listen to you. Infocom's Deadline also had this to some extent, so it will be interesting to see how The Hobbit compares. We're explicitly warned, however, that the complexity of this system makes it "impossible to guarantee it will ever be error-free." Indeed, The Hobbit has a reputation for being buggy.

I opted to play the TZX format version marked "v1.0" in spite of the risk of bugs, and loaded it up in Fuse. 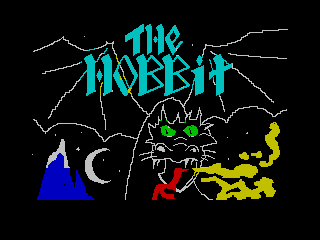 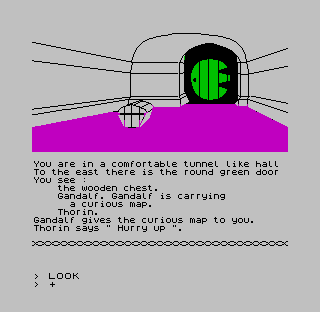 This was an unexpectedly small party - where are Thorin's twelve dwarf pals at my service, eating me out of house and home?

I wasn't really sure what to do with the map. Examining it simply informed me it was covered in arcane symbols, and the manual's suggestion of asking him to read it for me was useless; he couldn't read them either. Gandalf soon took it back from me anyway.  I couldn't meaningfully interact with the chest either; it opened fine, but the parser resisted my attempts to examine its contents, and I eventually was satisfied that the chest was empty; an assumption I then verified by putting the map inside, and seeing that its description changed accordingly to inform me that the map and only the map was inside it.

A note on emulation here, the ZX Spectrum's keyboard layout is not the same as the modern PS/2-derived standard. You'll need to type quotes in this game to give other characters instructions, and in Fuse this is done by pressing Shift+P.

I worked on Trizborting out Wilderland, a task made more tedious by the game's tendency to lie about valid exits, necessitating exhaustive searching. As I did this, Gandalf sort of wandered off and did his own thing, while Thorin followed me around, frequently told be to hurry up, and at least twice sat down and sang about gold. Occasionally Gandalf would just show up and tell me I was doing a great job.

Canonically, the trolls are Bilbo's first challenge, and he would solve it by tricking them into arguing among themselves until dawn breaks. That's a little much to expect of an 8-bit parser, even one that claims to be the most sophisticated natural language recognition program ever written. But here, the solution is simpler; just walk past them to the hidden path, wait until dawn, and return to the clearing where they have turned to stone and their key is there for the taking. This, as expected, opens the locked door to the troll's cave, although their treasure isn't so impressive. 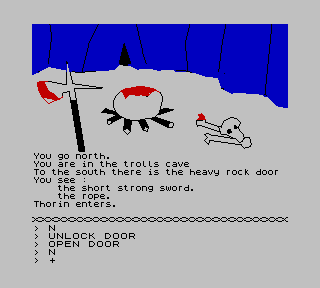