At this point, I knew my character was here for the long haul, so I decided to rename him. This wasn't possible in pedit5, where I created disposable character after disposable character until one of them happened to win, and my champion was stuck being called 'a.' No longer a disposable experiment like the countless 'a's before, I rechristened him Karl. 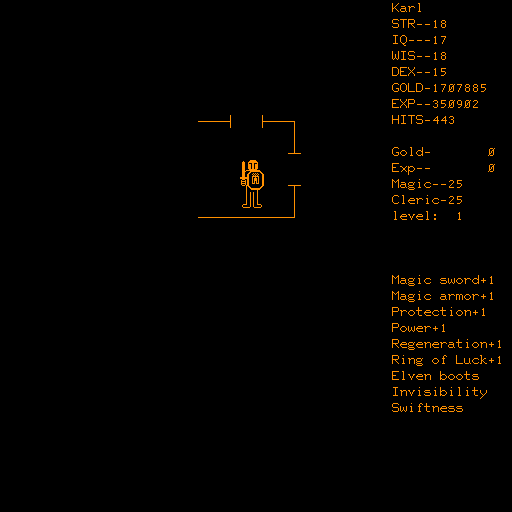 With level 5 mapped out, I went there to farm gold. With enough spell points I could last long enough to reliably gather 20K gold in a run, making this a much more lucrative effort than farming chests in level 1. Every 20K of gold earns you 5 more HP, two mage SP, and at least one cleric SP, up to a maximum of 25 SP each, and no apparent HP limit. I didn’t find a single certified safe chest on level 5 during a farming run there, so I didn’t open any, and have no idea what kind of riches the chests in the lower depths might bring you, or how much pain a trap might cause you.

The more gold you carry, the tougher the monsters you encounter. When I had mapped out level 5, the monsters weren’t too bad since I carried no gold, but with a sack full of coins I attracted monsters as high as level 70, which more than doubled my own level at this point.

Against monsters close to my own level, I would cast standard damage-dealing spells based on the data I gathered earlier. Against the higher level monsters, I’d cast lightning (except on lighting-resistant spectres), which always instantly killed them. Even though lightning can damage you, this was less frightening to me than the risk of failing to kill a strong monster with a weak spell and being forced to fight.

With 1.7 million gold in the bank, over 400 HP, XP at level 35, and my spell points maxed out, I decided to go deeper, and map out more levels. By forgoing gold, the monsters wouldn’t get too tough, but I still couldn’t afford to get careless. I’d have to cast a spell whenever there was any doubt over how much damage an enemy could do to me. I’d have to keep spell points reserved in case I needed to cast an emergency teleport or two (or three or more!) in case I stepped into a pit or downward teleporter. And I’d end my runs with some spells to spare, as I might need to cast some in the process of leaving.

Level 1 contains the Excelsior Transporter, which will teleport you down to any level you choose, but also does some damage, and the deeper you go, the greater the damage. The only way back to the surface is to slowly climb your way back up, one level at a time, so you’d better not Excelsior down more than one level below charted territory.

Over the next three days, I mapped out levels 6 through 16, and went from character level 35 to 54. Each run, I’d Excelsior down to the highest level that I hadn’t finished mapping, explore as much as I could until spells started running low, and then navigate my way back to the surface using my maps.

The toughest monsters I encountered were at level 24, which fell to my standard damaging spells. A single ghoul withstood a casting of Kitchen Sink, but I was able to kill it in its damaged state without suffering any HP loss. I eventually got a little bit braver with fighting; I tried fighting level 7 monsters to save SP, and took no more than 3 damage from them. I gradually got braver, fighting stronger monsters and keeping track of damage, until a level 14 demon did 99 points to me. As my max HP was 443, any more than that was unacceptable. If a level 14 demon can do 99 points, who’s to say a level 15 demon couldn’t do 450? My policy became like so:

For some time, I recorded the results of each fight, including my tactics, the monsters' level, and how much damage I took if any.

From this, I have a working theory about how combat actually works in this game. It’s a fairly wild guess, but it’s consistent with the data that I’ve gathered.

If you try to evade and fail, then you have no choice but to fight the monster, and the algorithm for damage done to you is the same as if you had fought.

If you cast a damaging spell, then the monster’s level is silently lowered by some amount, depending on your level, your stats (IQ for mage spells, Wisdom for cleric spells), the spell you cast, and the monster’s resistance to that spell. If its level is reduced to zero, it dies instantly. If not, you are forced to fight, but the algorithm uses the monster’s reduced level, and it therefore does less damage to you than if you fought it outright.

Level 16 had some pits and tricky teleportation locations, and took me a few tries to fully map out. Thankfully, I survived each attempt, and don’t think I had any real close calls thanks to my level of caution. I’m still on the character that I’ve been using since the start of my last entry, and I’d like to at the very least finish my mapping this way. The final attempt got me so much XP that I went from level 54 to level 82. Like I said, this game’s got some extreme power creep.

I also actually found a safe chest on level 5 while retreating from level 16. I opened it and found only 9K. That really doesn’t seem worth it anymore; I can find more than that on a single random pile down in level 16, as I discovered during one run when I forgot to turn off gold collection. Do chests’ payoffs even scale by level? Does their damage scale by level? These are things I am not likely to test any time soon.

Also during the mapping effort, I found a few new items:

The magic lantern was the last item I found, and it’s my favorite. It reveals invisible doors, which makes mapping out the levels so much easier, especially the deeper ones where you simply can’t get very far without using invisible doors. When retreating to the surface, I even discovered some hidden doors on higher levels that I thought I mapped already. Even level 1 has plenty of secret doors, which could have made navigating as a fledgling character a lot easier! 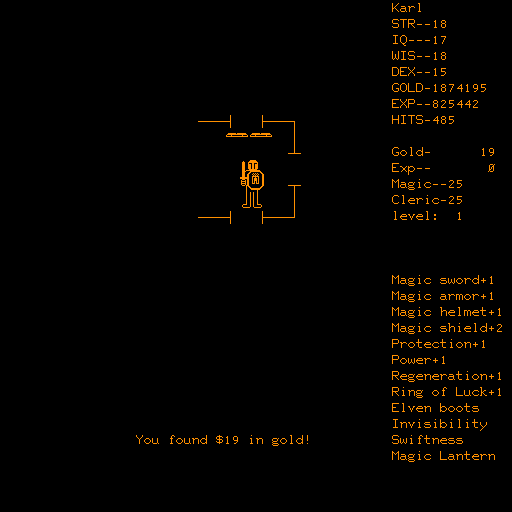 Only four levels left to map out, and with each new level I descend, the trip back home gets that much longer. Even though I’m gaining levels, my SP is as high as it’s going to get, and my HP hasn’t been climbing at a very big rate because I’m skipping the gold. I’m going to have to keep a close eye on my HP/SP and be very judicious about when to retreat. This is also the point where the dragon might start showing up, and I’m sure I’m not ready to take it on (or to escape with the orb), but the helpfile says I can run away without any fear of pursuit.

My maps so far: