The end finally came, principally out of boredom. It had been days of farming gold and XP, the end of it still not in sight, and I’d been getting really sick of it. So I decided to seek a thrill. 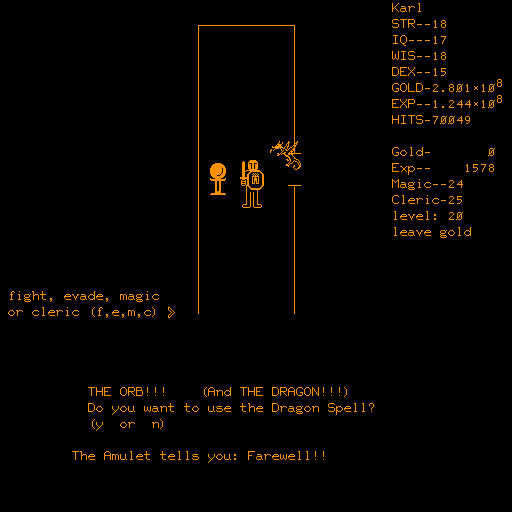 Forget the dragon spell. We know it works, and I don’t want to use it. Let’s see how it likes lightning. 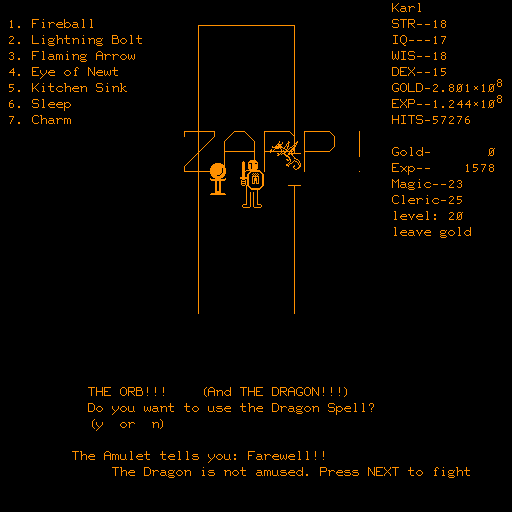 Uh-oh.  There’s two things to unpack here. One, the lightning spell just damaged me for about over 12,000 hits, about 18% of my total health. Two, the dragon is not dead, and I am now forced to fight it hand-to-hand, and the amulet says the odds aren’t in my favor. 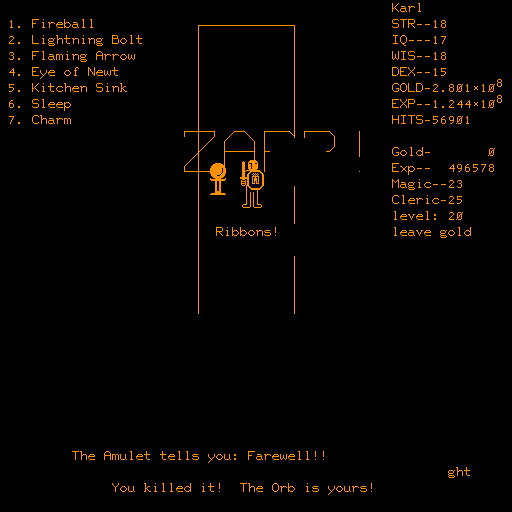 Killed it! And only took 375 hits in the process! This would support my theory that magic damage weakens monsters. Under this theory, we can assume the lightning bolt almost killed the dragon, but not quite, because it did less damage to me than most pushover monsters would at this point.

Walking out, I encountered enemies with levels into the 7000’s. 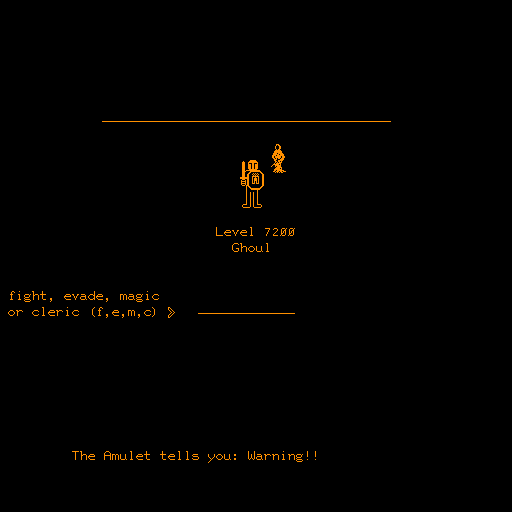 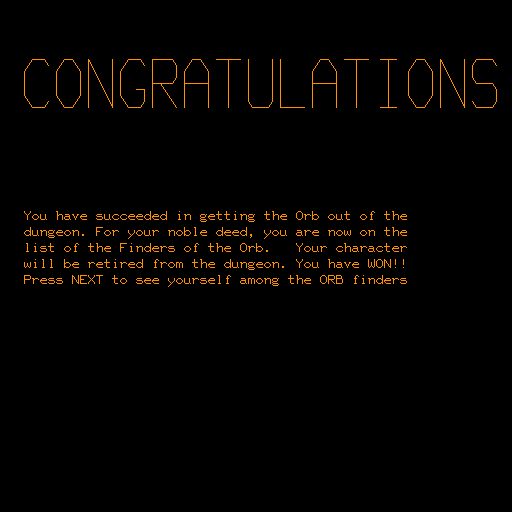 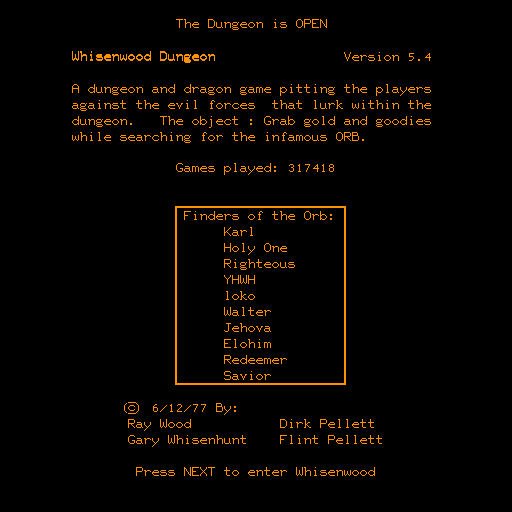 On first glance, this game seems a lot deeper than pedit5. And it is. But a lot of that is fake depth, with plenty of options that it seems you should never use. There are 14 combat spells, but only a few are useful throughout the game, and all of them are simple damage spells. Sleep is useless once you’re past the point where level 4 enemies can no longer hurt you, and I can’t picture a situation where I would ever want to use the other instant kill spells. Treasure chests are never safe, as I realized after finding a blinding gem of brightness in a deep chest that seemed safe, so from then on I never opened them. Books seem to be more likely to harm you than help, especially if you have a stat or two maxed out already, so I never read them. The dragon spell is worthless; if you’re not powerful enough to kill the dragon with normal magic, then you’re clearly not powerful enough to escape the dungeon with the orb with the meager spell points that casting the dragon spell leaves you with.

This game was most fun during the mapping phase, when I could easily survive level one, but the dangers on the levels below were unknown, and the risk of death seemed real. After that, the game quickly got really tedious, and remained tedious to the end. You live and breathe gold, and with permadeath on the line, there’s no good way to know how much of it you need to face the dragon, except for the amulet’s warning, and I got bored before anything useful came of that.

Gold runs quickly reached a plateau of about 10-12 million per run. The amount of gold you can get in a run depends on how long you can last in the dungeon. In the late game, just carrying a few million gold will attract monsters who are guaranteed to cause unacceptable HP loss if you fight them directly, but pose no threat to you whatsoever as long as you cast the right spell on them. Since your spell points cap at 50 points, this means you can take on about 50 such monsters before you need to stash your gold and leave. Theoretically, having more gold and XP should let you stretch your spells out longer, but in practice this didn’t seem to happen to a significant degree.

In the end, most of my time with this game was joyless. This could partly be my fault, as I spent weeks approximating the enemy spell resistances. Maybe that wasn’t necessary. Even if I had skipped that, the last several days were spent with the mind-numbing repetition of farming gold, and I really don’t see any way it could have been more enjoyable by playing differently. Trying to stay in the dungeon for extra gold once the spells ran out wouldn’t have been risky, it would have been suicide. I preferred pedit5. That game might have been cruel and random, but as I beat it in two days, and my winning character won in under three hours, at least it was short.
Email ThisBlogThis!Share to TwitterShare to FacebookShare to Pinterest
Labels: PLATO