This made me smile:


Anyway, I had another brush with death while grinding for the dragon.

Given that I don’t know how powerful the dragon is, I intend to farm gold and XP until the point where the gains per run don’t seem significant any more.

During one run, I thought this point was coming soon. You see, there’s a limit to how much gold you can pick up, determined by strength. At 18 strength, you can carry out no more than 1.8 million gold per run, which gains you 450 HP. That’s a nearly 50% increase over what I had when I finished mapping, so it’s still going to be a big benefit for a while. But after 10 runs, I’d have over 5,000 HP, and then a 450 HP wouldn’t seem like as big a deal.

Gold appears on random floor tiles as you walk the dungeon, and leaving a floor resets all of the gold. So a good way to farm gold is to Excelsior Transport down to the lowest level you feel comfortable on, then take a long walk from the spot you land on to an Up teleporter. Then take a long walk from the new spot you landed on to a Down teleporter. Repeat the cycle until you have as much gold as you like, then stop collecting it and walk back to the surface. To optimize out your XP gain too, hang around level 2 and pace back and forth near an Up teleporter, blast all the enemies that approach you with spells until you run low, and then leave.

I gradually worked my way up to a 1.8 million gold run this way. Gradually, because I didn’t want to risk attracting too strong monsters too soon by maxing out my gold. Carrying out a million pieces, the monsters on the way back proved no problem, all of them falling to my standard spells without landing a single hit on me, unless I chose to fight them. I tried a 1.2 million run, then a 1.4 million, then 1.6 million, until I finally did a 1.8 million gold piece run. The strongest enemies I ever saw were around level 400, and they still fell to my standard spells.

Clearly I was invulnerable, at least as long as I didn’t get careless and run out of spells. Eventually, as predicted, my HP gains per run plateaued, and since the monsters wouldn’t get much higher than level 400, so did the XP gains.

Or at least that would be the case if I hadn’t picked up a new artifact on my way back during the run; a bag of holding. This increases your gold capacity a hundredfold, and with it, even stronger monsters.

The potential power scope gone up by yet another order of magnitude, I decided to test the waters by Teleporting down to level 20, scooping up 2.7 million gold. Again, no problem; the strongest monsters around level 600 and fell easily. Next run, at level 409 and with over 3,600 HP, I gathered 4.24 million. On the way back, most of the monsters fell easily, but a level 812 Ghoul was not amused by my Pray spell. He did 105 damage to me, which isn’t much, but told me that maybe I was starting to get too greedy and should slow down a bit.

But on the way up, I started getting concerned that my stock of spells wouldn’t last the whole trip. I exhausted my mage spells first, and without passwall, some of the more convoluted levels forced me to take long walks to the exit, blasting several monsters out of the way with my rapidly dwindling cleric spell supply.

On level 6, with only five spells left, I realized I wasn’t going to make it. Luckily, there’s an option that up until now, I hadn’t felt the need to use. An option that Pellett added to v5.4, and wouldn’t have been an option in 1975. You can stash your gold, which I did. This dumped out all of my gold, but the enemy attacks immediately relented, and I escaped from the dungeon easily, only having to fight level 1-7 wimps.

Then I went back in, refreshed, intending to return to level 6 to retrieve my stash. Instead, I stupidly Excelsior Transported to level 20, my muscle memory taken over. Not that big a deal; I turned off gold collection, and walked all the way back to level 6, and the enemies on the way were easy enough to just fight.

On level 6, I returned to the square where I stashed my gold, and 3.99 million remained. Good enough! I took it all, and with a mostly full spellbook, easily made it back to level 2, where I farmed XP with my remaining spells and gained about 100 levels. A few enemies at level 700-800 landed some hits on me, but not enough to cause concern. 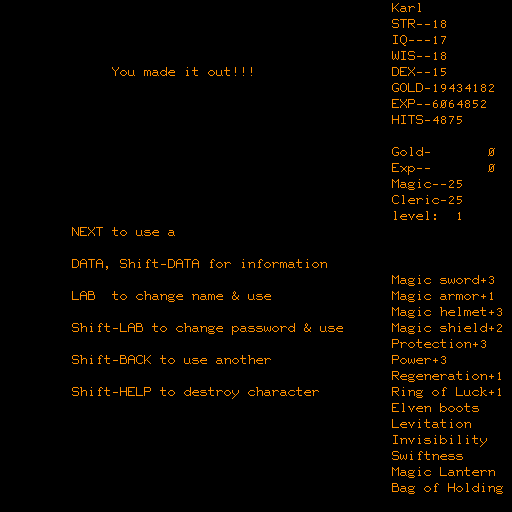 Now I’m level 606, and have 4875 HP, and I still have no idea if I’m ready for the dragon. But I’m ready to farm gold by the millions.
Email ThisBlogThis!Share to TwitterShare to FacebookShare to Pinterest
Labels: PLATO