Well, I finally had a close call.

While mapping level 17, I soon found a teleporter to level 16. On arrival, I found a chest. Inspecting it, it appeared to be safe. So I happily opened it, eager to find out what riches awaited at such depths. Or perhaps to find a pittance and have it confirmed that chests are a waste of time past a certain point.

Surprise! Inside was a “Gem of brightness.” These things blind you for some number of turns. Not wishing to wander blindly without knowing where I was, I stayed still for a few turns. I remained blind. I stayed still a few more turns. Then something started chewing on me, and then I had an encounter. 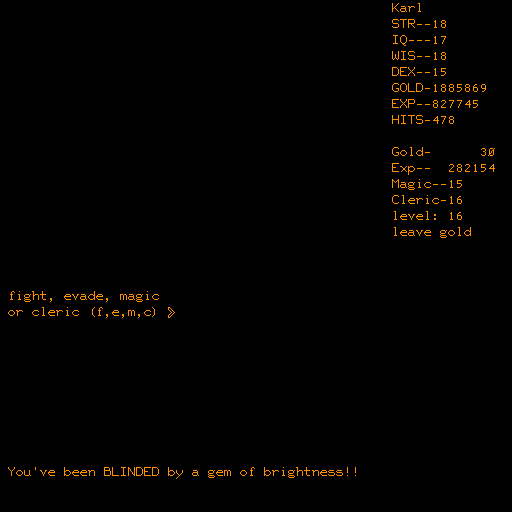 The usual options of fight/escape/magic/cleric presented themselves, but I had no idea what I was facing, or what level it would be. I decided to cast lightning bolt, and deal with the risk of backfiring. At least it would probably kill the monster.

Result: “The Spectre is not amused. Press NEXT to fight”

Crap. The one enemy in the game who isn’t harmed by lightning bolt. With no choice but to fight it at its full strength, I did. 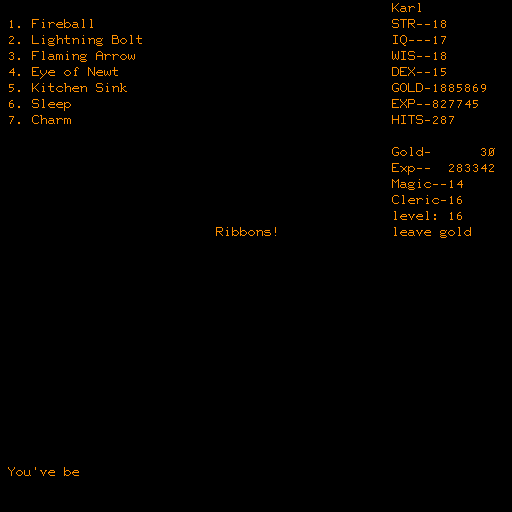 Thankfully, I won, but this episode did a number on my HP, and I was still blind. Rather than wait it out, I decided to cast teleport a few times to reach higher ground where the monsters would be tamer. I still had plenty of SP, so it seemed wise to use it to get as close to the surface as possible, at least until the blindness wore off, even if it meant abandoning this run.

A few levels up, and the blindness wore off. I walked back to the surface, flinging spells at the easy enemies on the way back, and escaped without further incident.

The run wasn’t a total bust. I charted a good chunk of level 17, and I also gained enough XP to go from level 85 to level 111. And I learned a lesson – never trust chests! The only way you can avoid a gem of brightness is to never open a chest.

I returned to level 17 via Excelsior Transporter and continued to map it out. In the process, I found the dragon, guarding the orb! 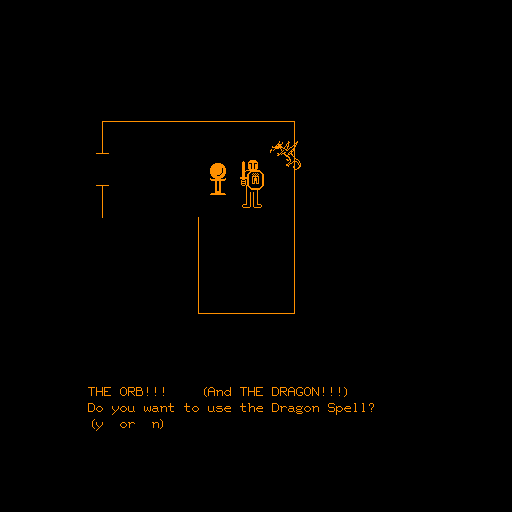 I declined to cast the dragon spell, and just ran. True to the helpfile, the dragon did not pursue.

I finished mapping out the level, and started going home. On the way, I found a potion of treasure hunting. So I got a little bold, reckless perhaps, and turned on the gold gathering function. Gold started coming in by the hundred thousand. Enemies got tougher, reaching in excess of level 100, but they still fell to my spells. On the upper floors the gold piles got smaller, but the enemies didn’t relent any. Then on level 2, I encountered the toughest enemy yet, a level 127 Glass. 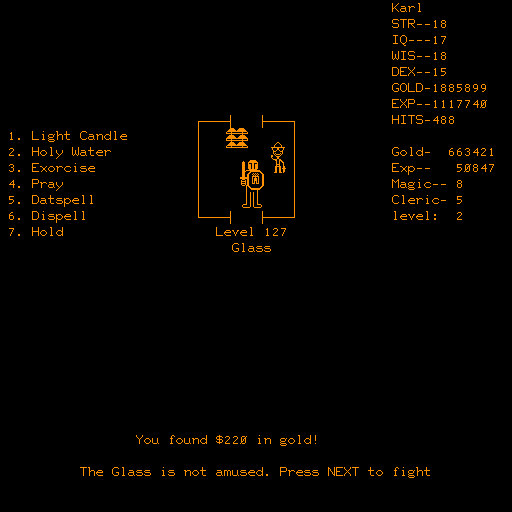 Pray did not kill him, and I was a bit concerned. Luckily, it must have hurt him pretty bad, because he didn’t do much damage when I had to fight him.

Then I mapped out levels 18-20 without incident, although levels 19 and 20 were deliberately annoying. On level 17 on my way back from mapping level 20, I decided to check out the dragon again. Yep, he was still in the same place where I found him the first time, and so was the orb. And yep, I still ran away. 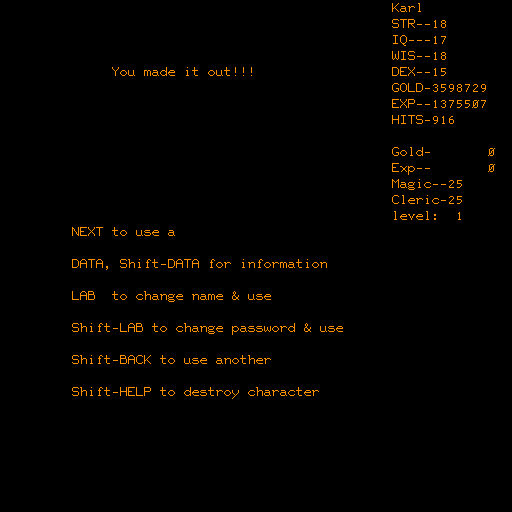 Maps completed, I now have over 900 HP, and am at level 137. I suspect this is still not nearly enough to take on the dragon and escape with the orb. But now that my maps are finished, I can do some serious grinding. I won’t re-dive straight into level 20 quite yet, but I’ll start at 12, and rebase further down as I start to feel more confident that I can escape with a fat sack of gold every single time.
Email ThisBlogThis!Share to TwitterShare to FacebookShare to Pinterest
Labels: PLATO