This entry replaces an earlier one. Short version – my first attempt failed because the map display was mangled and useless. Then I figured out how to fix it. The original post is here.

As mentioned, before, DND-likes are an early sub-genre of CRPGs, which started with dnd (or perhaps pedit5) on the PLATO network, and culminated with Daniel Lawrence’s Telengard’s commercial release in 1982.

Lawrence’s mainframe branch of DND appears to be an important missing link, a predecessor to Telengard, and also to multiple other DND-likes by other authors. Lawrence denied having ever played dnd on PLATO, while dnd’s maintainer Dirk Pellett claims he outright plagiarized it.

The earliest version I can find is a VAX/VMS port of DND, which I downloaded here. Getting it to work was no simple task; I had to emulate a VAX machine with the emulator SIMH, figure out how to install OpenVMS, and then mount the disk images using little but a sparse and partly incorrect readme file and some rusty knowledge of Unix.

And even then, it didn’t work right with Windows’ console window. The ingame display was horribly mangled.

Turns out VAX and Windows have different ideas about how line feeds should work. Windows throws in a carriage return for free, but DND is counting on VAX to not do that. Luckily, I discovered a replacement console called Cmder, which works fine.

There are already three things on that screen that differentiate DND from pedit5 and dnd.

First, all six D&D attributes are present, including Charisma.

Second, you can select classes. Dnd and pedit5 both lacked classes, instead granting your character access to both mage and cleric spells, with separate spell points for each school. Here, the cleric casts the cleric spells, and the mage casts the mage spells. The fighter can’t cast spells, but unlike pedit5 and dnd can actually fight decently.

Third, you can select one of three dungeons to explore.

Let’s see what “Utter a pray for escape” does.

And here’s our first major difference from pedit5 and dnd. Combat is no longer resolved instantly once you take an action, but plays out round by round and lets you take a new action on every turn.

HP half gone, spells depleted, time to head back to the surface. Good thing I’m not far from the exit!


My next character found a chest soon, which are much more generous than random piles of silver. 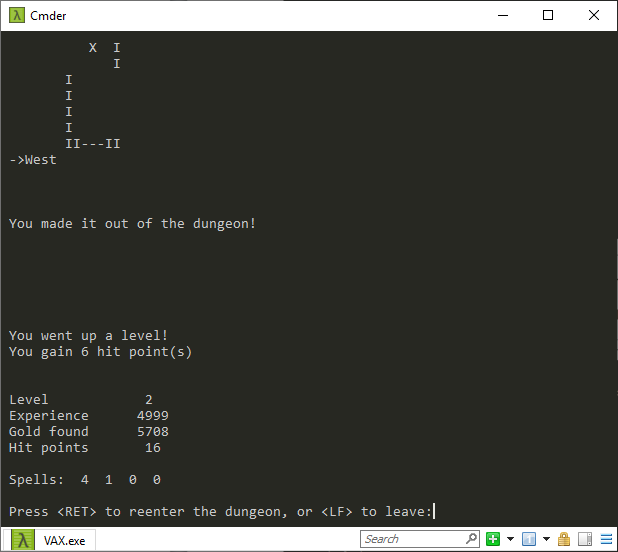 There seems to be a gold->experience rate penalty when your character level is overleveled. At first, each gold was worth an XP. At level 2, I get half my XP in gold. Gold gathered in deeper levels is not penalized in this manner.

That “spells” list shows the four tiers of mage spells, from which I can cast four level 1 spells and one level 2 spell. The level 1 spell sleep is still the most useful spell at this point, but it doesn’t work on undead.

One level up later, I gained access to level 3 spells including “continual light.” I tried it out: 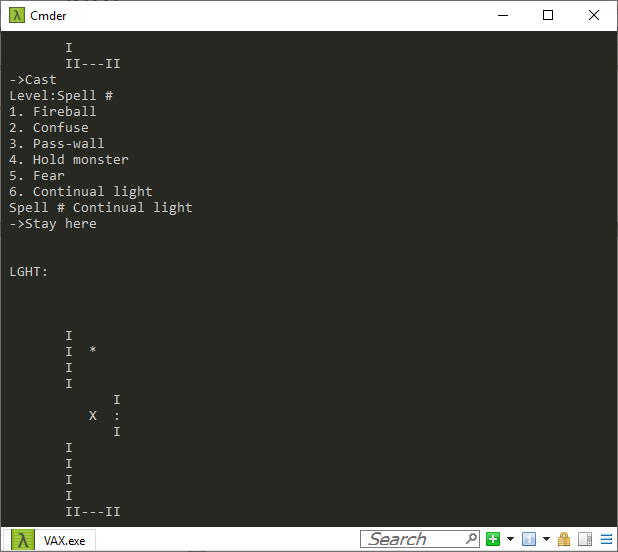 This showed me there was a thing to the north (it turned out to be a kobold, but it could have been treasure too), and a secret door to the east.

Restarting yet again, I wandered around familiar territory, dealt with enemies with magic, retreated whenever empty, and leveled up mostly through treasure chests, which were still worth it even with the XP penalty. Sleep remained very reliable, and Phantasmal forces worked surprisingly well against the undead. 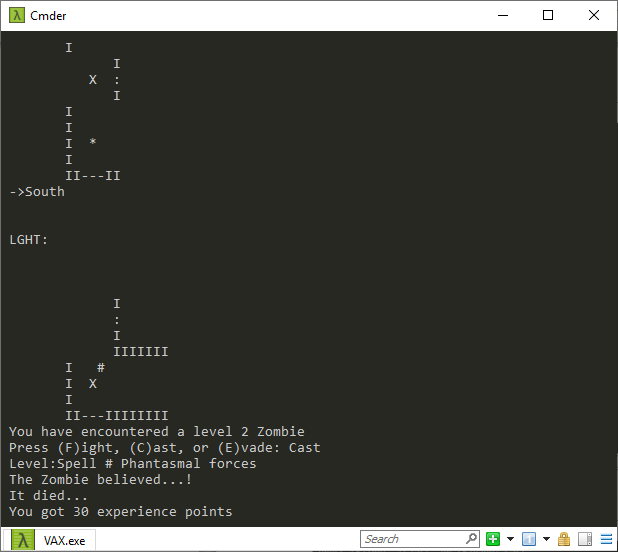 At this point, I had access to level 3 spells, and I experimented with all 18 spells available. These were my findings.

I did some exploring, and found multiple types of special dungeon features. 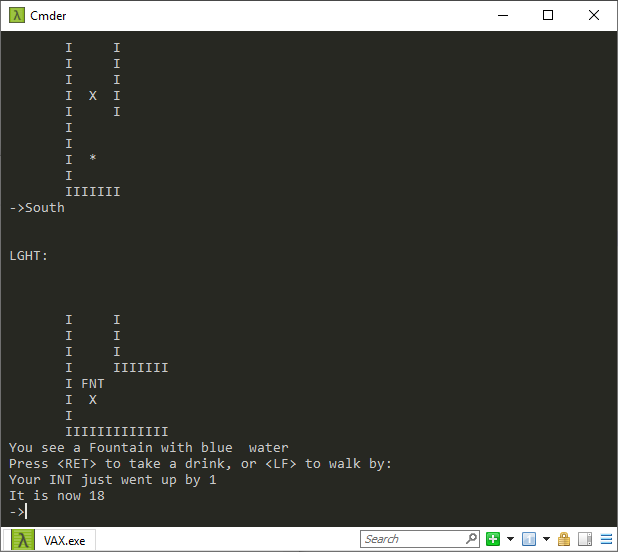 Fountains have random effects if you drink from them:
The color of the fountain is random, but doesn’t seem to make any difference. 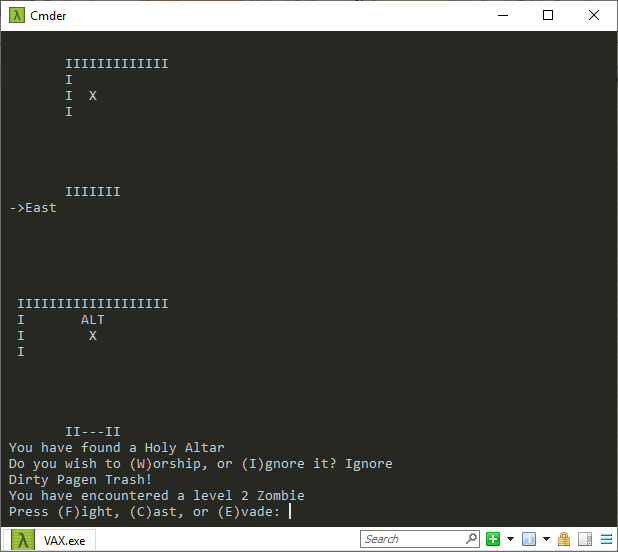 Holy Altars can grant boons if you worship and donate generously, but may invoke divine wrath if you ignore them or donate too little. 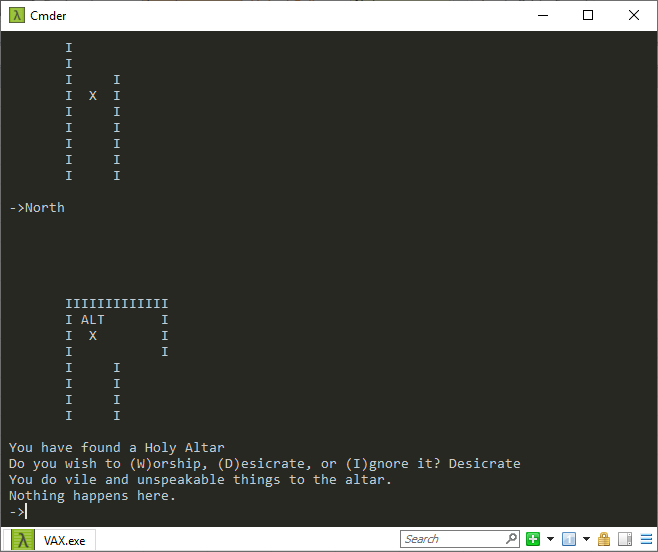 Sometimes there’s an option to “Desicrate,” but I don’t know what makes that option available or what it does, exactly. 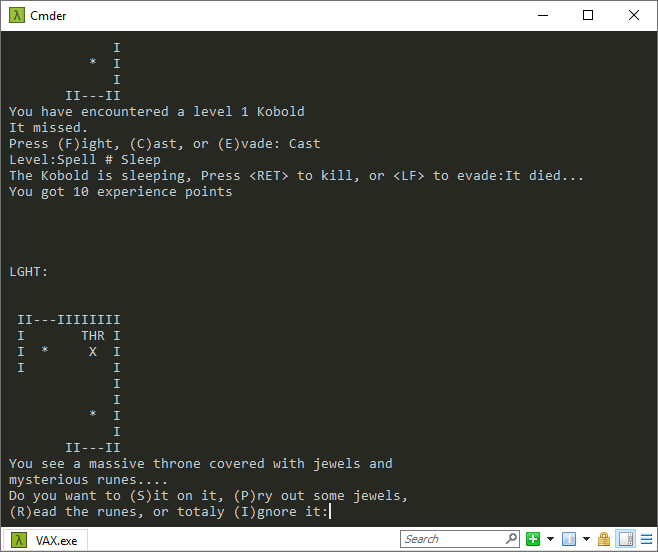 A jewel-and-rune-covered throne, with a sundry of options, but none of them did anything for me. 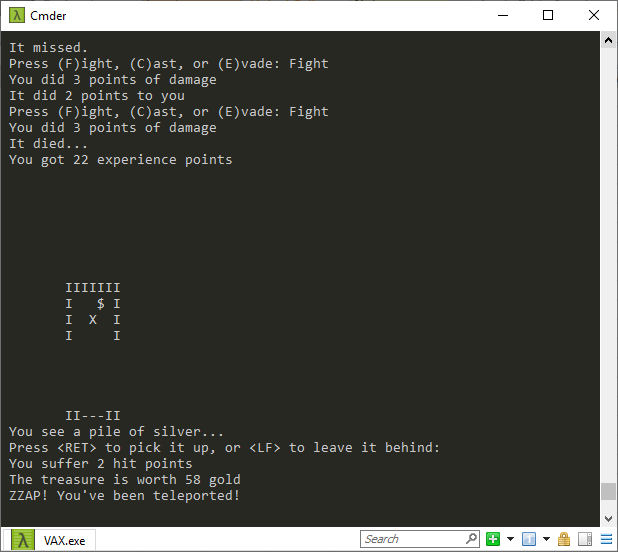 Teleporters will zap you somewhere else in the dungeon, possibly even to another floor, which got me killed me more than once, and compelled me to start making maps. The destination of each teleporter seems to be fixed, but there also doesn’t seem to be any clear pattern to where the teleporters take you. 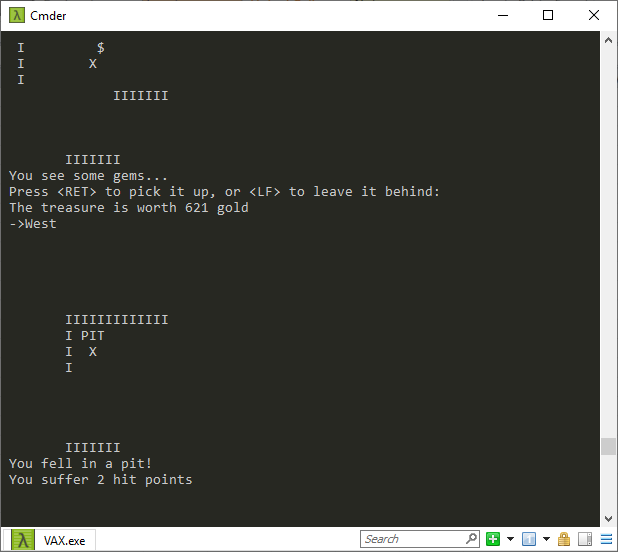 Pits, which you will sometimes just fall into, and sometimes will have the option to climb down in or walk around. They always lead one dungeon level down, to the same X,Y coordinates as the pit. 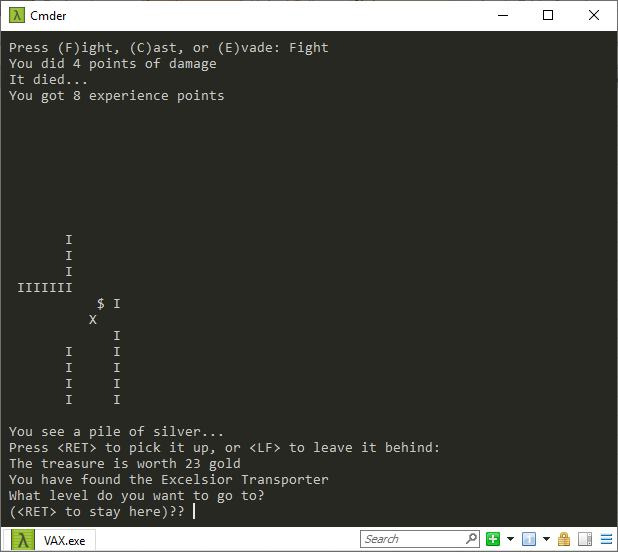 The Excelsior Transporter! Pretty much the smoking gun in debunking Lawrence’s dubious claims that he never played dnd.

One difference from dnd is that every dungeon level’s got an Excelsior Transporter, and it conveniently takes you to ET’s on other floors. In dnd, only the first floor had one, it dropped you off on a random square of your selected floor, and you had to climb your way back up. It’s a good thing you don’t have to do that here, because DND’s dungeon levels are much larger. 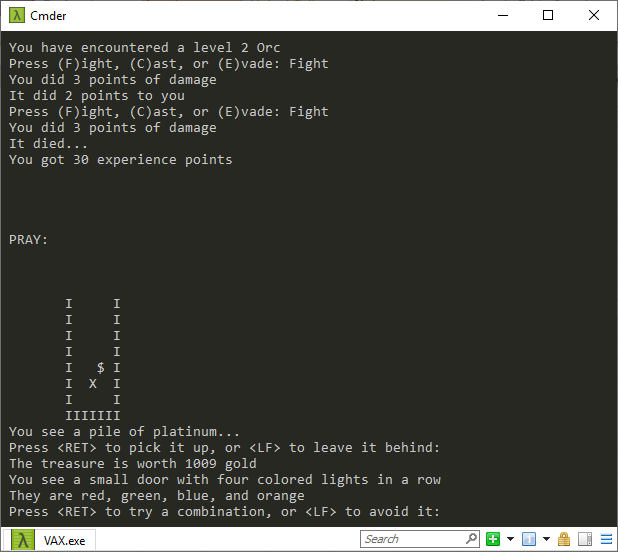 A small door with colored lights lets you enter any combination of two buttons, for a possible 16 combinations. I tried all 16 combinations, and all that happened is that I got zapped for a bit of damage each time. 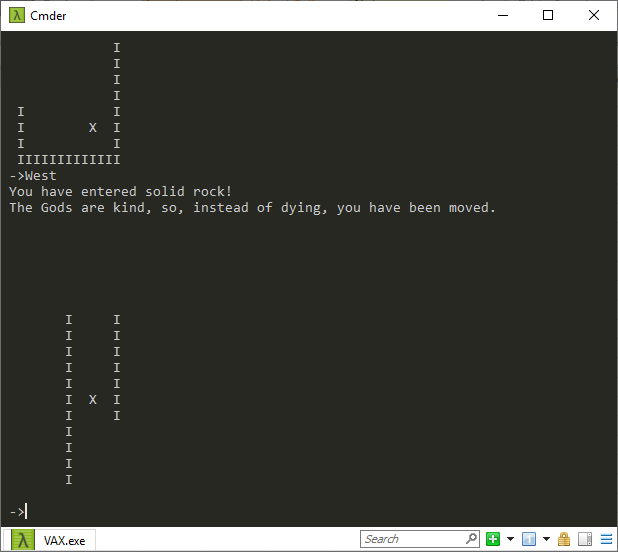 A square in the lower-left corner of the map proved to be “solid rock,” but in practice was a teleporter.

With level 1 mostly mapped out, and more than half an hour of earnest gametime logged for this character, I exited the dungeon, and backed up my save file. This game features permadeath, and although I’m sticking with my rules against savescum abuse, I’m not going to risk losing more than a half hour of progress with this game.

Level 4 spells were available at this point, which I tested. 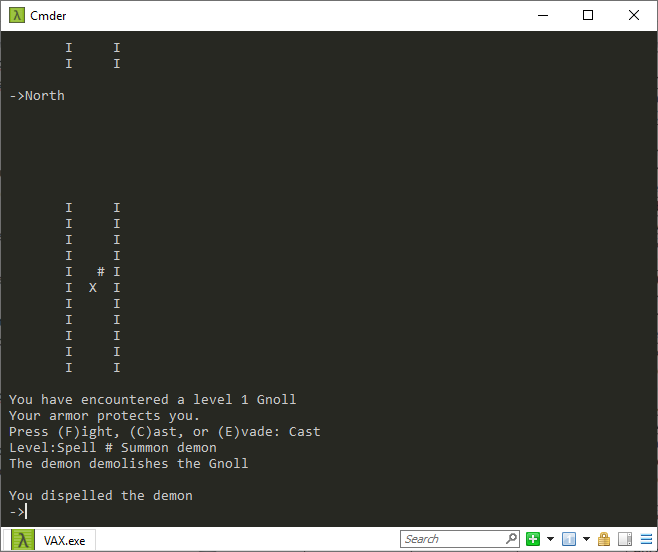 My impressions so far are pretty favorable!  It’s clear that Lawrence had played dnd, but I wouldn’t go as far to call it wholesale plagiarism. Even from just exploring the first floor, combat appears to be a lot more interesting, there are a ton of random events and special encounters that dnd lacks, and the magic system is much better developed with spells that do more things than “do damage” and “kill.” Some specific elements are stolen, for sure. I’m certain it’s no accident that both games have an Excelsior Transporter, or that your quest is to retrieve an orb. But the general dungeon crawling template isn’t something dnd’s authors can claim exclusive ownership of, and DND has quite a few novel ideas in it that hadn’t been seen before in any prior CRPG.

My game plan is to try delving a bit deeper, in search of loot and XP. I’m at character level 5, so perhaps I can survive a trip down to dungeon level 5, which will be easy to reach thanks to the Excelsior Transporter, and easy to return from provided I can avoid the random teleporters. I don’t see much point in trying to map the entire 20x20 dungeon floors, but I will map as I go, mainly so that I have a chance of finding my way back in case of random teleportation.

My mostly complete map of level 1: 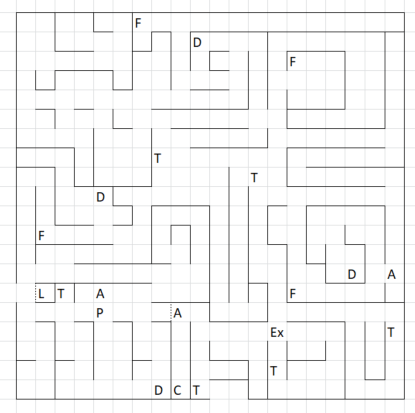