Moria: One ring to view them all 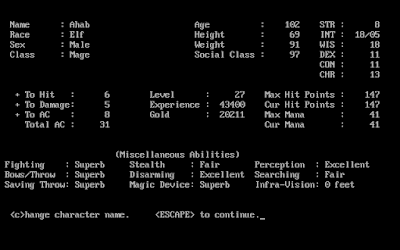 Moria encourages, and perhaps demands, a slow, methodical, cautious game. This is, of course, impossible in the original Rogue, where hunger and finite resources compel you to keep moving into deeper, more dangerous territory, and games rarely take more than an hour or two before your almost inevitable demise, which is made less painful knowing that your subsequent retry will likely play differently enough to feel like a new experience.

In Moria, you can spend more than an hour exploring a single dungeon floor, and once you're rich enough to buy scrolls of word-of-recall with monsters' pocket change, you can repeat these floor indefinitely - you buy two (or three) scrolls in town, use one to return to the dungeon where a brand new level full of more mazes, monsters, and loot is generated for you, and use the second when you want to return to town, whether it's to avoid trouble or to repeat the loop all over again.

I'd been repeating stages quite a bit lately - as conservatively as I'd been playing, perhaps it wasn't quite conservative enough. Level 36 seemed like a huge difficulty leap after a series of fairly untroublesome and equally unrewarding runs at levels 31-35. Monsters posed little threat as long as I played carefully enough to avoid getting mobbed and made sure to recover mana at every opportunity, but experience yields were slim, and my character had only leveled once during this period, reaching 27. Had I simply been lucky/unlucky in only encountering easy monsters for this phase, and consequently reached level 36 underleveled? The recovered loot hadn't been great either; although I could identify things with magic and no longer needed scrolls, my mediocre strength meant I couldn't even pick up most of the weapons and armor drops. Money wasn't a problem, but shops in town didn't sell anything suitable as permanent gear/stat upgrades except for scrolls of enchant weapons/armor, and I was getting to the point where those were beginning to fail. The loot drops I prized most were potions that granted permanent stat upgrades, but these were rare.

I did, eventually, manage to clear out a dungeon 36 levels deep. I mentioned in my last post that Gray Wraiths are bad news that can drain your levels on touch and drain your mana from far away, and I did encounter one, but managed to approach it from the opposite end of a long, straight corridor and with  a full mana bar, where I could blast it to bits with a few well-placed Fire Bolts without suffering its draining touch. I graduated down to level 37, but still had to wonder if this was wise - was I really ready, or had I just barely survived the one before it? Impatience, and the safety net of a daily backed-up save, propelled me forward.

I had a few stock fighting strategies, depending on the encounter.

I had learned that it's okay to cast emergency spells on an empty mana bar, namely Teleport and Teleport Other, if it will save your life. You'll faint and possibly lose a constitution point, but if you live, you can recover with a potion.

There were problems that forced retreats when they didn't kill me outright:

I eventually cleared a level 37 without any bad encounters and also without leveling or meaningfully improving myself except for some experience gains.

After numerous failed attempts with no meaningful gains, and quite a bit of irreversible acid damage to my armor, I decided to try a new approach. I needed better gear, and I'd buy scrolls of Detect Object to find stuff lying around, while using Detect Monster to spot dragons and other things that I didn't want to deal with. This wouldn't help me avoid invisible stat-drainers, but for that I had Recall and restoration potions.

I stealthily went down to level 40, which seemed like a nice round number for a dungeon to farm. One of the first things I found this way, which still took several runs, was a much-needed potion of strength. It wasn't much, but it helped a little bit with carrying more stuff. Some hours later, I found a far more badly needed ring of Detect Invisibility, not by Detect Object, but by killing an evil mage that was guarding a cache of other things which turned out to be useless.

With this trinket I could finally see my translucent tormentors.

Some of my routs and deaths:

After a good day of running level 40 and usually returning in worse shape than I had left it, my only real gains being a potion of Constitution, I decided to be reckless and head for level 50 in the hopes of better treasure, and perhaps a look at the Balrog. I was perfectly aware that this tactic would be suicide if I weren't using backups, but that ship had sailed long ago. Reaching level 50 wasn't too difficult between my spells that revealed staircase locations, spells that revealed monsters, and spells that dug tunnels, but it still took a few tries. There were some mishaps from nastier monsters slipping past my magical reconnaissance, especially invisible ones which are not revealed by magic even with the Detect Invisibility ring, though none fatal. 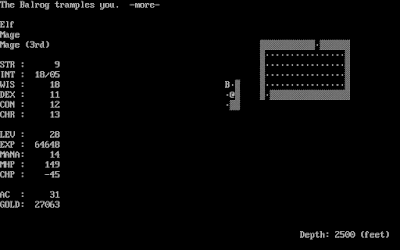 The Balrog was on level 50, alright. I went in a few times, came back empty handed usually, but in one run, I self-teleported right onto him. And he utterly stomped me.

Here, I also sometimes found Evil Iggy, an obnoxious, nigh-invulnerable thief who had a penchant for stealing things from my pack and disappearing in a puff of smoke.

What I didn't find, at least not for awhile, was any good loot. The manual mentions "ego" weapons with amazing powers, and also mentions armor with elemental resistance. So far I haven't found either, nor have I found any rings or amulets with properties I haven't already encountered on earlier floors, or any more potions of Restore HP or Healing or powerful scrolls like Genocide. I did, after at least ten fruitless runs, locate another potion of strength, and a potion of experience which granted tens of thousands of EXP and took me straight to level 30, but this has hardly been the lootfest that I was hoping for. The stores haven't stocked anything new either.

How are you actually supposed to beat this game?