I'm taking a detour into the past to play a quickie CRPG of ambiguous importance. I wasn't originally going to bother with Dungeon Campaign; although it's one of the earliest RPG-like games available on personal computers, it isn't clear that this or any of Robert C. Clardy's other Apple II games informed anything of note, even if his 1980 Odyssey was glowingly well received by CGW's Scorpia as late as 1993.

Nevertheless, I've toyed with the idea a few times, and just decided to do it - it's an afternoon's investment at most.

Dungeon Campaign, like all Apple II games of this era, was coded in Integer BASIC and distributed on tapes, though no tape versions seem to be dumped. It is directly based on the game "Dragon Maze," which originally existed as a type-in program in the Apple II 1978 reference manual.

I found quite a few disk copies of Dragon Maze on archive.org, most of them modified from the original, but one was authentic as far as I could tell.

The dragon isn't very smart and will just walk back and forth if he can't move closer to you, but if this happens too long he will jump over a wall.

The trick to winning is to memorize the maze, which annoyingly vanishes the exact moment that it finishes being generated. It will re-reveal itself as you bump into walls, but if you need to do this, the dragon will certainly jump over a wall and chase you into a corner. The dragon starts near the exit, and since there's only one route, so there's no getting around it. You've got to manipulate the dragon to move away from the exit, and preferably get stuck in an alcove somewhere, or get it to jump a wall so that it follows you while you head directly for the exit. Both techniques only work if you know the exact path to the exit as well as enough walls to manipulate the dragon's movement.

It's not a great game, but it's meant more as a learning exercise than an enjoyable experience in itself, so I'm not bothering to rate it. 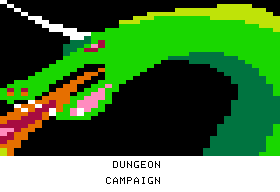 I am playing a floppy-based re-release which bundles both Dungeon Campaign and Wilderness campaign. 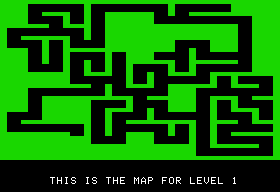 Dungeon Campaign begins by generating maps for four levels, but there's not much point in paying attention to any but the last. Only the map for the fourth level reveals its exit; the rest have staircases that could be anywhere. 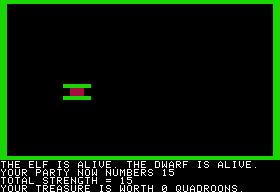 We have 15 adventurers including an elf who warns when traps are near, and a dwarf who updates the map as the dungeon is explored. There are no stats or hitpoints; taking hits in combat or wandering into traps just means people die. The party levels up as a unit and the overall combat effectiveness is equal to this level times the number of surviving adventurers. A melee in which one of the 15 dies but the party gains a level means our overall strength rises from 15 to 28.

You can jump to avoid traps when the elf warns you are near one, but this isn't always possible when a junction or corner is trapped, as happened to me almost right away.

The necromancer sent me to level 3, right by the staircase to level 4, where I encountered 79 ghouls and somehow won at the cost of five adventurers, though I don't fully understand why, as I only landed a successful hit once. 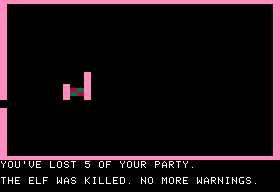 The prize was grand, though.

Before exiting the dungeon, I went back up to level 3, noticed that one of the rooms was highlighted, and searched it for a bit more treasure. Then I returned to level 4 and left, though on the way a spectre entered and killed one more of us. 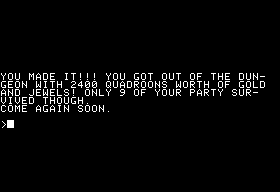 I replayed two more times, and made more effort to explore the dungeon. Some notes:

During my second replay, I gathered 4200 quadroons on the upper levels and got my party to reach level 9, but traps and fights started to take their toll. I escaped with 6 survivors. Was the extra money worth all those lives? Who knows.

GAB rating: Average. It's simplistic and a little weird, but Dungeon Campaign does what it sets out to do; give the experience of a dungeon crawl in the space of a few minutes.

Robert C. Clardy won't be relevant to Data Driven Gamer again until way into the future of 1989 with  J.R.R. Tolkien's War in Middle Earth, and after that not again until 1997 when Synergistic Software produced the Hellfire expansion pack for the original Diablo.

We'll soon return to our regularly scheduled 1983 programming with a series of posts on Moria, the Roguelike that would gradually turn into Angband.