Can I just say, that horrifying 3D face sticking out of the game box wouldn't make me feel intrigued and want to buy a copy to find out what it's all about. It would make me want to burn the computer store shelf with an acetylene torch and sterilize it with an industrial UV emitter. That is all.

In 1982, sci-fi author and founder of Sentient Software Michael Berlyn joined Infocom and designed Suspended, which was released in February 1983. With Infocom's comparatively advanced Z-machine engine and other resources at his disposal, Suspended could easily overcome the restraints that limited his earlier BASIC-coded adventures at Sentient.

You are a "Central Mentality" - a citizen of planet Contra chosen by lottery to be cryogenically frozen in an underground complex, and to be awakened by monitor computers and tasked with remedial action in case something goes catastrophically wrong on the planet surface during your 500 year tenure. We're warned that the previous CM, Franklin, went berserk when he was awakened without reason, and sabotaged the planet's traffic and weather systems, killing thousands in the resulting chaos.

As a human popsicle, you cannot move or interact with anything directly, but instead control six individual robots by neural link, each with different abilities:

A seventh unnamed robot is somewhere in the complex, sabotaged and hidden by Franklin.

There's a lot of information in the manual to unpack, such as controlling the robots, the various systems and interfaces in the underground complex, and the multiple peripherals available to Whiz. 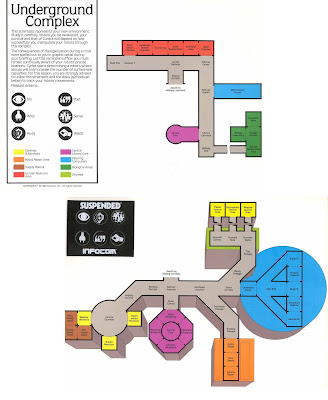 One big difference between Suspended and other Infocom games, though, is that mapping is not required. A map of the complex is included in the box, and six punch-out tokens represent the robots and their positions. Robots needn't be given compass directions to navigate either; a command such as "sensa, go to gamma repair" will be enough for Sensa to automatically navigate there and notify you when the location is reached, or if an obstacle prevents this.

Upon starting, we are alerted that the planetary systems are deteriorating. Sensa reports a 9.7 tremor that has dislodged cables in the computer room, and Iris reports that her vision is in disrepair. Soon, Sensa reports a 7.3 aftershock that damages cooling systems in the maintenance area. I have Waldo examine Iris, and he says there is a maintenance panel, but it is too delicate to open with standard grasping extensions.

In the main supply room, Waldo describes a medium-sized object with smaller objects sitting in its two depressions. Whiz has a different description; a GG-1 with socketed CX3 and CX4 chips. After some fumbling with the interface, I found out how to have Whiz look these objects up on the technical peripheral - the object is a device used to reset the filtering computers, and the chips are switching processors. In the meantime, a third tremor damaged the other two surface controllers.

Soon later, I was alerted to intruders in the complex. The objects in the middle supply room included an object tagged BA1 containing five different replacement chips, a sixteen-inch cable that a manual addendum warns not to use, and a grasper for Waldo with microsurgery attachments. During this information gathering, Whiz notified me that the intruders were reviving a clone. Then, as I sent Waldo to the weather monitor where Iris awaited repairs, the cryochamber door swung open.

I'm not exactly sure what the plan with the clones is - disconnect me, freeze a clone in my place, and then revive him immediately in order to repair the complex? Why not just send in someone who can do the repairs without being in suspended animation?

Anyway, I had lost my first game, but learned enough to repair Iris. Restarting, I had Waldo install the grasper and open Iris' panel, Poet touch each chip inside and detect the malfunctioning one, and Waldo pluck it out and replace with the corresponding spare. Iris could see again, though being confined to a small corner of the complex, other robots would need to bring her objects to look at.

Even with vision, it's useful to have objects examined by multiple robots. For instance, in the main supply room, the robots describe a machine in such manners:

Whiz can get further information from the computer peripherals.

Evidently, Franklin put the wrong chips in this machine and ruined them. But by putting the correct color-coded chips into their proper sockets, the machine can be opened, revealing codes inside the circles. It wasn't yet clear to me what to do with the codes, though.

I took some time to explore each room in the complex, reloading to the point where I fixed Iris whenever I ran out of time.

The weather monitors show numbers without units, which is a big goof for anyone proposing to be into science. Planet temperature is 34 and winds are 46, which I must assume are Fahrenheit and mp/h. There's a torrential sleet that later becomes a blinding snowstorm. Weather towers 1 and 3 report stable pressures of "55," and if that's in inHg, it's like being 28 feet underwater. Weather tower 2 reports "32" and it drops fast.

The central chamber by the monitors houses a column with a door visible only to Iris, pulsing with electricity visible to Sensa. Whiz identifies this as "CPU," and queries to the peripherals reveal that it houses the robots' control unit, e.g. myself. You really don't want to open the door.

Transit monitors seem normal, with no casualties. Glide ramps run at 30mph, which seems a little dangerous to embark and disembark from, but I don't know what's normal around here. Hydroponics monitors seem okay too.

The corridors are mostly uninteresting. The hallway junction on the first floor has a small step to the north heading to the lower level where Auda is located, but robots can't climb stairs. You must get a ramp from the supply rooms and place it here to connect the floors.

The three repair rooms house a conveyor belt, and advisory peripheral says that object placed on the north end will emerge repaired on the south end. I tested this on Iris's busted scanning processor, and while this did activate the conveyor belt, it was not repaired. Too delicate, perhaps? A cabinet openable by Sensa houses the remains of Fred, but I could not find a way to move him onto the repair belt.

The eastern section where the filtering computers are kept is trouble; any robot entering this region dies soon after from an acidic mist. Nevertheless, I found that in the "primary channel" between FCs alpha and Beta, there were four cables, one of which could be taken without electrocuting the robot. A plug tagged "PL-1" had no data available, and a sign "ACS" has the reset code - but we'd need to find a way to show the sign to Iris. The "secondary channel" between Beta and Gamma FCs were the same.

The weather control area had three dials, all set to 55. I tested the first and third; they were operational and caused the tower pressures to slowly change accordingly. The hydroponics control room had levers set to more meaningless numbers, which corresponded to water, minerals, and lighting according to the technical peripheral. The transit control area had three switches, with no indicators or measurements.

On the ground floor, the hallway end has a vehicle that takes a robot to the biology area, where my clones are kept in cryogenic storage. A lever is out of the robots reach, and a TV camera lies on a table in the lab. By taking it to the eastern area, plugging it in, and pointing it at the sign, I could see that it says FOOBAR, though at the cost of one robot's life. Easily undone with a loaded save.

Working northward, the library core is not compatible with robots and contains nothing of interest. The maintenance access contains a leaking coolant controller, spraying acid upward into the computer room.

A series of rooms in the north, off limits to robots (not that this stops them), represent a recreation area. A plaque in the westmost room, a sterilization chamber, has a bronze plaque that Iris can read if it's brought to her but is merely a Frobozzco ad with no useful information. A decontamination room contains an ultraviolet showerhead. The entry area is featureless. A supply room holds an unreachable cable cutting tool and an unopenable cabinet. The activities area and sleep chamber here are featureless to the robots.

At this point, I've seen pretty much the whole complex and have an idea of what's in it. The apparent challenge right now is to find a way to fix the cooling system so that my robots can enter the computer room and reconnect the cables.

Email ThisBlogThis!Share to TwitterShare to FacebookShare to Pinterest
Labels: Infocom