Moria (no relation to the Moria on PLATO) is what I might call a "priority ancestor." A game that does not meet whale status, but is critically important as a predecessor to a game that does, but one so far away that I don't want to wait years for that game's phase to start.

Depending on when Jay Fenlayson's Hack first came out - Wikipedia says 1982 but the Nethack Wiki says 1984 - Moria might be the first true Roguelike, apart from Rogue itself. That itself isn't the reason for its importance - Data Driven Gamer isn't concerned with "firsts" as much as influence, but Moria is considered to be the originator of the *band branch of Roguelikes. This branch distinguishes itself from the original Rogue, in which consumable resources are scarce, permanent equipment upgrades are rare, and you're always vulnerable, by instead having farmable resources, a wide variety of gear, a town where you can return to and buy things, and a high power ceiling for the player. Most notably from a commercial standpoint, Blizzard's Diablo was strongly influenced by *bands, though it doesn't fit the formula exactly. 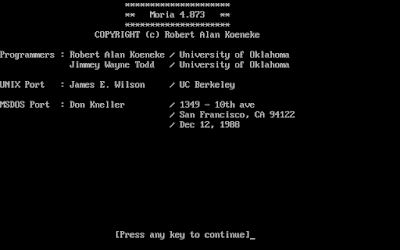 Angband's history document says that Moria's first release was in March 1983, coded in Pascal for VAX/VMS by Robert Alan Koeneke and Jimmey Wayne Todd Jr. at the University of Okahoma. Ideally, I would want to emulate a VAX/VMS system and play this version. I've done it before; in DDG's first year, I did this in order to play a c1977 port of Daniel Lawrence's DND. But although Koeneke's final Pascal codebase has been preserved, I regret that setting up a Pascal environment within an emulated VAX/VMS session and importing, compiling, and running the code is beyond my abilities. The earliest that I can play is a 1987 recode in C by James E. Wilson, which conveniently had a DOS release. Whatever undocumented changes occurred in the four year interim will remain mysteries.

On a related note, there is a DOS game floating around with the filename "MORIA2," which is mostly in French, is designated "Version 1.9.9," copyrighted by a mysterious "AJM86," and predates Wilson's C conversion by a year. 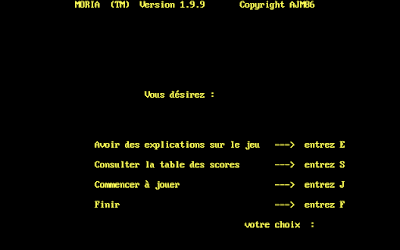 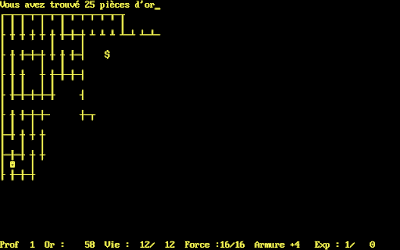 This game is clearly derived from Rogue, but bears little resemblance to Wilson's Moria port, lacking any sort of character creation or town level, and the command list strongly corresponds to Rogue's. Dungeon layout is much more mazelike than either Rogue or Moria. There are vestiges of English prose, which suggests an unfinished translation of a now lost English original. Could this be a port of a very early version of Koeneke's Moria, or is it just another Roguelike that sprung up and happens to share the name? The evidence is frustratingly inconclusive, and I don't feel entirely comfortable classifying Rogue as a 1983 game given that I simply don't know how much advancement occurred between then and the time I began playing. 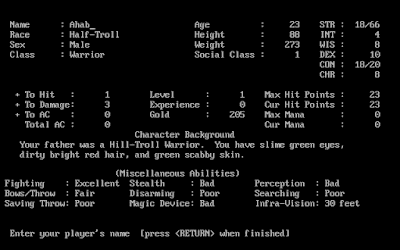 The first thing in Moria (or at least Wilson's port) that makes it stand out from Rogue is its character creation screen. Rogue just dumped you into the dungeon with a premade character, with HP and strength the only meaningful stats. Here, you choose a race, class, and roll for all six conventional D&D stats. Races determine stat bonuses, available classes, and also skills. For instance, half-trolls are terrific fighters but lousy at everything else, and halflings are bad fighters but awesome at everything else. I decided to make my first character a half-troll warrior. 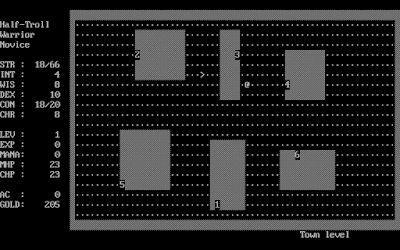 The next thing you see is a town, serving as a hub for shops where you can buy general supplies, weapons, armor, scrolls, potions, and magic artifacts. It's easy to see how this might have translated to Diablo's Tristram. It's also pretty annoying to navigate, with beggars accosting you, idiots drooling on you, and on occasion rogues pinching your stuff. You can just murder then without penalty, though. As a half-troll, shopkeepers hated me and overcharged, and I couldn't afford anything better than what I already had, so I just went into the dungeon. 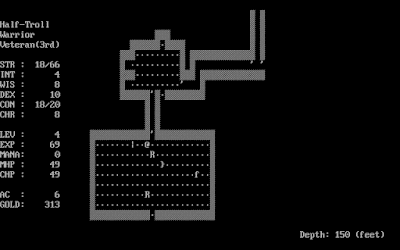 Initial impressions are that combat is fairly easy and mindless. I'm sure that doesn't hold up for long, but I fought my way through four levels of the dungeon without ever feeling my life was in danger. One time I got poisoned, but there was no stat loss and the effect didn't last long. Treasures weren't anything great - quite a few objects were broken, like swords and sticks, and I even found some skeletons with no clear use. There were the usual scrolls with nonsense words, colorful potions, none of which had obvious effects when I used/drank them. One dagger was called "Misericorde," which I identified with a scroll, revealing no particular properties to distinguish it from my standard issue "Stiletto" dagger.

Dungeons are also much more complicated than Rogue's fairly simple layouts of nine rooms connected by tunnels. They are bigger than the screen and scroll as you approach the edge of it. As in Rogue, there are often doors concealed in the dead-ends of the tunnels between rooms, and you must repeatedly search to find them. There's an option to view a scaled-down version of the map on your screen, but it's kind of a garbled mess to look at, applying sort of a "nearest-neighbor" approach to consolidating the tiles that mangles the wall geometry, making the map not terribly useful.

At 200 feet deep, I couldn't find the next staircase down, but I did find one leading up, which is something you don't see at all in Rogue until you find the amulet of Yendor. I decided to take it and work my way back up to town.

Whenever you traverse a staircase, whether you go up or down, Moria always generates a new level for you, with new monsters, new treasures, new rooms and tunnels and traps, and you're plopped down in a random part of it, probably not close to any stairs. Real-world logic that you should be able to immediately turn around and go back down the stairs that you just ascended (or vice-versa) just doesn't apply in Moria.

After going up two levels, I ran into a problem. 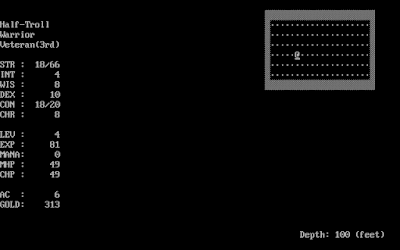 How was I supposed to get out of this room? My only thought was that just maybe a secret door was hidden in one of these walls. Unfortunately, half-trolls are bad at searching, and without having a shovel or pickaxe (neither of which had been for sale), everyone is bad at digging.

I did, thankfully, discover the exit by circumferencing the room while searching every step, but this took some time. And eventually found my way back to town, though all I could afford was a short sword and a few bits of armor.

I made my next journey a suicide mission to find out just how deep I could go on brute force alone. I took only staircases going down, adamantly searched for hidden doors whenever plain sight lacked for a way forward (which was very often), and consumed potions and scrolls immediately on finding new ones, under the assumption that bad effects could be more easily dealt with sooner rather than later.

The secret doors proved an even bigger problem in Moria than in Rogue. Levels are much bigger and much more complex. Sometimes you hit a dead-end in a tunnel which often signifies a secret door, but as a half-blind troll it can take upwards of ten searches to be successful, even on these upper levels. Often you've explored every inch of the dungeon that you could see and not found any staircases or any obvious places for secret doors, and then you've got to turn on auto-search and comb the area until you find something. At least food isn't as big a deal in Moria, being cheap and fairly plentiful.

I did eventually get killed, nine levels below the surface, and I took note of some interesting hazards in the meantime:

What did me in in the end was a yeti, who didn't inflict massive damage with any individual hit, but killed me through dozens of cuts throughout a lengthy battle no doubt prolonged by my weakened state from the red naga.

My takeaway from the experience? Always carry a scroll of word-of-recall in case something bad like this happens.

So far, I am not quite enjoying this as much as I did Rogue. It's certainly fairer and generally seems more winnable, but Rogue had a briskness and sense of urgency that you don't often see in RPGs. Moria feels leisurely in comparison, which isn't a bad thing, but I can easily see this game becoming grindy, low-risk, and boring to mitigate the threat of permadeath, which was never an option in Rogue. Time will tell if this becomes a self-fulfilling prophecy.

I also have to wonder, if I had this much difficulty finding secret doors as a troll a mere nine levels deep, how much worse does it get when I'm close to level 50? Are half-troll fighters even tenable endgame material?