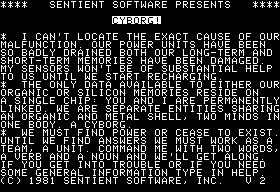 I presume that Michael Berlyn's second game, also released in 1981, was inspired by Martin Caidin's novel of the same name and its TV adaptation The Six Million Dollar Man. You've been partly rebuilt as a machine by "NASA II," and sent on a mission, though the manual - which incidentally can't seem to decide whether this copy of the game is for the Commodore 64 or the Apple II - doesn't say what the mission is, and when you boot up the game you've got amnesia. In the novel and show, cyborg protagonist Steve Austin gained enhanced speed and strength, various gadget augments, and crippling existential angst. Here, you get the existential angst, social despise, an artificial personality inside your head that you can't turn off, and an array of scanners that are marginally more useful than looking.
So, the premise isn't exactly original (thankfully the plot diverges almost immediately once you start playing), but there's more commitment to the sci-fi trappings than in Oo-Topos. The need to communicate with the cyborg mind inside you anticipates Berlyn's Suspended, in which you control six blind robots through a neural link. 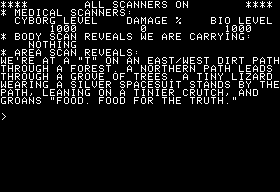 We begin in the forest with amnesia resulting from a mysterious malfunction, ignorant of our mission here. So far it plays much like any other text adventure of the time, with its nodal, compass-point exploration. In keeping with the theme, "SCAN AREA" replaces "LOOK," and "SCAN BODY" gives us self-diagnostic information including inventory carried. Berlyn has seen fit to eliminate scoring, feeling it serves no purpose in a narrative-based adventure. Your cyborg mind may also be consulted on a handful of topics - the current area, objects in the vicinity, notes on the parser, or just general help. Invalid commands are rejected in character as well - e.g. "SCANNING REVEALS WE CANNOT GO IN THAT DIRECTION."
The forest is 25 rooms of strongly othographic connectivity, arranged in a 5x5 grid where all eight directions are used and for the most part traverse the grid just as you would expect. While mapping it out, the computer beeped, and the cyborg alerted me that energy was dropping. 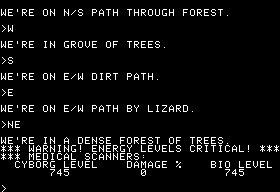 A power unit found discarded in the forest raised the cyborg's energy level, but didn't affect the bio level, and once it reached 500, I died of hunger, and had to restart.
The forest is mostly rooms of nothing, but within it I found:
Death in Cyborg, provided you still have energy remaining, permits you one extra chance, with no plausible explanation offered for your resurrection. Given that doing this scatters your inventory, you might as well just restart or reload.
West of the forest is an indoor area where I found a shoulder harness. A room here labeled "detox station 1" was too dark to explore, and a passageway to the northeast was sealed by another invisible force.
A path to the south of the forest leads to an southward-heading ramp. Continuing brings us to a long, eastward-heading hall, with a vending machine in the west end, and a keycard-locked door to a maintenance room in the east end, with a sheet of ultramicrofiche on the floor. Climbing over the ramp's railing to a visible clearing below the ramp causes damage - apparently the railing is electrified - and we can't return back up from this new area. 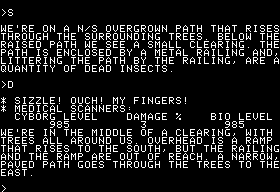 In the clearing below the ramp, heading in any direction but east goes to one of three "lost in forest" rooms, a pointless MOTLP that can only be solved with item breadcrumbs and loops back to the clearing. Eastward takes us through a canyon that branches to north to a dark tunnel, and further east to the maintenance room, where we find matches, sneakers, a plastic cube, and another keycard locked door. With the matches - and there's only 15 of them, each good for a single move, we can reach the end of the dark tunnel, where we find a stepladder and another power-pack.
With the ladder, I returned to the top of the ramp, suffered some more damage, and went back to the detox station. After using a match to see I could interact with a scanner, but it rejected me, and the cyborg opined that I needed the right id.
I got stuck here. I did discover that by wearing laser gun, you can kill the snake in the woods, but this didn't help my situation at all. I thought that maybe by wearing sneakers you could climb the tree, but the game doesn't recognize this option. My bio levels soon reached terminal levels and I died of hunger again. I had to look up a walkthrough to see what to do next.
Firstly, it said the lizard man can be fed with dead bugs found by the electric fence, but that this doesn't work in "some Apple II versions." It didn't work with any of the three versions available on Asimov including the 4am dump. Thankfully, this isn't a required action. The next thing I was missing is that you can type "CUT CUBE," which I had tried before, but this only works when wearing the laser.
Inside the cube is an ID card, which opened the door between the maintenance room and hall south of the ramp, allowing me to exit this area with the ladder in inventory. The card can also make the vending machine dispense an apple, which can be eaten for more bio energy. It can be fed to the lizard as well, but to no apparent benefit - he will eat it, but still will not talk. Wearing the ID lets you pass through the detox chamber into a dark gravtube to a dark region, where many matches were burned, and many save states were loaded navigating around. 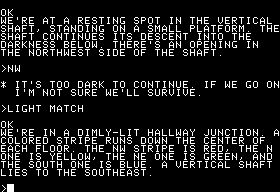 Within this region, I passed through several dark corridors and junctions connecting to science-oriented facilities, or at least ; a laboratory, storage room, hydroponics, a sickbay, and an observation bubble, from which I could see we were in orbit over an extraterrestrial world. This entire place is evidently an artificial construct in space, and the forest is a terrarium. This module had apparently been devastated by an explosion some time prior to arrival, as the power is out and most of the equipment is ruined. It's also clear that you're not supposed to fully explore these utility tunnels on matches alone - there aren't nearly enough - but it's kind of hard to find the one place you're supposed to go by any means except going everywhere until you find it. At the bottom of the gravtube is a dormitory where the power is still on, though the place is otherwise in shambles. I found nothing useful here except for a battery and an unopenable footlocker.
My initial impressions of Cyborg are generally positive. Berlyn already shows much more confidence and dedication to his concept and theme than Oo-Topos had, though to some extent his vision is limited by the capabilities of his BASIC engine, and to another extent by his inexperience or perhaps limited resources and time.
My map so far (forest region is simplified):
Email ThisBlogThis!Share to TwitterShare to FacebookShare to Pinterest