Oo-Topos is winnable now! Almost a week before I started playing it, a new copy was put into the 4am collection at Archive.org. This version shows "V0.1.2" on the title screen and fixes the bug that made the first version unwinnable. If I'm not mistaken, it's a bit faster too, though still pretty slow.
One of the recurring problems in Oo-Topos is that certain actions will trigger hostile enemies to pursue you forever until you find a way to deal with them. Entering a gravcar area spawns a guard whose tenacity basically made up for his lousy aim. Accumulating treasure spawns an alien mummy who won't kill you, but will constantly and randomly show up and take things from you. And on the beach where your ship lies in pieces, there's an alien crab that follows you everywhere and eventually kills you with a poisonous bite (Mike, crabs don't bite, they pinch, and poison is ingested).
Previously, an encounter with the "tras" at the bottom of a deep bit showed me that combat is pretty random, and not necessarily in your favor. The needler weapon that I found there proved to be its doom, but luck alone, as far as I could tell, determined whether I would kill it before it killed me. This non-determinism not only makes finding these solutions unsatisfying, but also violates an unwritten rule of trust. My weapons had failed to kill before - does that mean I was using the wrong approach, or that I was unlucky? Adventure was guilty of this with its dwarves, but this only happened with the dwarves, and your attacks usually worked. Zork was okay about this because the encounter with the troll was so lopsided in your favor and yet dynamic enough to teach you that combat has a random element. But here, it's just worrying, and I felt compelled to rely much on saving/loading to retry.
The rule here, which is only known to me in retrospect, is that these enemies are killed with their own weapons. And after you do, the weapons serve no other purpose. The alien near the start is killed with his own laser gun, and this always works. The tras at the bottom of the pit is killed with the needler found there. On the same note, crabbette by your ship sometimes tosses a pouch of poison right at you. You just pick it up and type "kill crabbette" until it works.
The encounter with the alien by the gravcar was ridiculous. 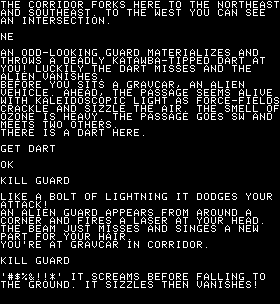 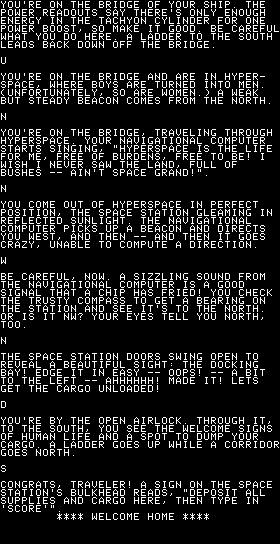 One last job to do. I retrieved everything from the hold again, six items at a time, dropping them onto the bulkhead floor. I typed "score" and it said I had 130 points, over 611 turns, with no fanfare or acknowledgement that I had found or done everything. After a brief review of the code I concluded there wasn't any, so I didn't bother playing any longer to determine if I had missed anything. I'm satisfied that this is the only closure that you get. In fact, you can "win" by returning without anything, not even the serum. The only difference in acknowledgement would be your lower score.
I did put together how the scoring system works. First of all, there are 46 points scored by completing certain actions:
The rest of the points are from recovering inventory items. I had 42 items, and each is worth 2 points when brought to the floor of the loading bay. Prior to this, you'll get 2 points for each treasure in your inventory, and 1 point for each non-treasure in your inventory. Delivering all 42 items (not counting the seven needed to repair your ship) is worth 84 points, for a total of 130, unless I'm missing something.
My final Trizbort map had 141 rooms, making it a bit bigger than Colossal Cave Adventure, and certainly the largest BASIC adventure game that I've played yet.
GAB rating: Average. Jason Dyer describes this as a sci-fi version of adventure, and this seems about right. I enjoyed the exploration aspect when I wasn't stuck in mazes, but sweet Xenu does this game overdo it on the mazes, with five boring MOTLP mazes that all but mandate mapping out with spreadsheets and item breadcrumbs.
To Oo-Topos' credit, I enjoyed its writing more than I enjoyed Adventure's. Its best feature is that most of the items give amusing little descriptions or anecdotes when examined, which is a feature we take for granted now, but was far from universal in 1981. Even Zork didn't have this as consistently. And apart from the lame luck-based combat puzzles, where three times you need to kill an enemy with the very weapon it throws at your feet and the fourth time you kill it with a weapon that's already there, the puzzles are pretty alright. They're a bit easy and I solved the game without external help (other than Dyers' warning), but with a simple BASIC engine you're not going to get terribly sophisticated puzzles anyway, and figuring out what to do through intuition, process of elimination, or deducing the meaning of a clue in an item description was pretty satisfying.
I did not enjoy the mazes, the tedious item hauling in the endgame, or how it doesn't acknowledge when you're done, and got irritated by a number of previously mentioned failings. In the end, Oo-Topos is more interesting than Adventure, but also more flawed, and ultimately I can't say it's better or worse than that ur-Adventure it so closely models.
My final map: