Thanks to Jason Dyer at Renga in Blue, I've had advance warning that Oo-Topos is unwinnable. I've skimmed over most of his postings to minimize spoilers, but at some point late in the game, you'll find a box containing the game's big MacGuffin, and there's no way to refer to it due to an apparent bug. Oo-Topos is programmed in BASIC, so maybe I can find a way to fix it, and I'll update this post if I manage to.
Edit - the 4am collection version is winnable. I didn't find this out until I started my third and final post, so all screenshots are taken from an earlier version.
Our next whale, Suspended, is another sci-fi Infocom text adventure, designed by newcomer Michael Berlyn, who would design two more of their classics and go on to work with Interplay (Tass Times in Tonetown), Naughty Dog (Keef the Thief), and Accolade, and then found his own company with Marc Blank which produced Syphon Filter and Bubsy 3D for the Playstation.
Before Suspended, Berlyn had authored two published novels, and co-founded Sentient Software with his wife to self-publish his earliest adventure games. The first, Oo-Topos, would later be remade with graphics by Polarware (publisher of Transylvania), but I will be playing the original.
Read the manual here:
https://mocagh.org/loadpage.php?getgame=oo-topos
For a game that tries to sell itself on its author's sci-fi credentials, Oo-Topos plot is about as thin as most games of its era. You're shipwrecked on an uncharted planet, and imprisoned by its natives, who have stripped your ship for parts and taken its cargo, including a direly needed serum for a Space Plague. You have to escape (surprisingly easy), explore the planet, find your ship and all the parts and cargo, repair it and leave.
As always, I began by Trizborting out a map of the game, which is on the large side for an early microcomputer adventure. Starcross had 86 rooms, and so far I've mapped 77 rooms in Oo-Topos, with little idea of how many more there might be. There's been very little gating so far either - I could simply walk out of the prison, and aside from a nearby encounter in a cul-de-sac where a panicked alien drops his gun, and you must grab it and shoot him to leave, I haven't solved a single inventory puzzle in my explorations so far that was needed to explore what I've charted. And I know there's more to chart before I need to start figuring out how to open figuratively locked doors.
The exploration phase had been fairly conventional, with the usual set of challenges:
One bit of mercy is that although much of the planet is dark, the light source (a "light rod" which I found before stumbling into any dark rooms and can be used with the unintuitive command "ON ROD") doesn't seem to expire. During my playthrough so far it didn't give any warnings of running out, anyway.
It didn't take long to realize that Oo-Topos is just Colossal Cave Adventure with the thinnest veneer of sci-fi. Aliens with laserguns replace dwarves with axes. Gravtubes replace vertical shafts. Ship components replace treasure. Certain rooms respond to magic teleportation words. Upon death the game offers to resurrect you, which brings you back to the start and scatters your items making the option pointless. There's even a maze of twisting little passages, all different, where the layout is completely nonsensical and the room descriptions differ by word permutations. 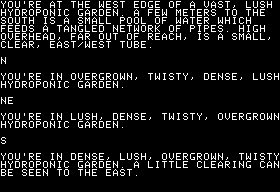 After breaking out of prison, there's a hub room with exits in eight directions, two of them leading to the game's first MOTLP. It's a simple three room "maze," but you would get hopelessly lost in it without breadcrumbs, as all three rooms are described as "narrow twisty hallway," and each room has five or six exits that simply loop back into itself. Finding your way out will either lead back into the hub, or into a tiny room containing a wire cage and a passage upwards. To the southeast is a stone room where acid drips from the walls. To the north is a smelly room with suspended platforms and a table covered in food scraps and a flask of oil. To the west is a set of staircases leading upward as well, in which I found a gold ring, and a universal translator protected by a laser-immune robot. This hub room also contains a tachyon cylinder which cannot yet be taken as it's dangerously radioactive.
In the upper region of this area, we find:
Entering the gravcar area seems to spawn a hostile alien with bad aim, who follows you around everywhere and keeps shooting at you, but shooting back simply causes him to take your laser gun. And eventually he will shoot and not miss.
Another gravtube here leads up to a tower solarium, from which we can walk east to a rooftop overlooking a jungle in one direction and a beach in another, and then go south to another gravtube to a forking tunnel. To the west it widens up and we find gloves and another inoperable gravcar. To the east is the aforementioned hydroponic garden maze. Exits to the northeast and southeast go to an area that loops around the hydroponic garden maze and connects to its eastern side, making the garden maze pointless to explore.
Going northeast from the forking tunnel, we walk through a clear plastic passageway and can see catwalks to the south, and the hydroponic garden below. A discarded Betamax cassette lies in the midsection here. A staircase leads down to a room with blinking strobe lights, and a hot, dry corridor, in which an apparition flickers in and out of existence, blocking access to doors do the north and south. At the end of this corridor are the catwalks, from which we can go northwest through a shaft back to the forking tunnel, or east to a kitchen and onward to the other side of the hydroponic garden maze where we find a field nullifier, or we can go north or west.
To the west, a one-way vactrain leads to a staircase, and at the top of it is another MOTLP, a "room" with identical floors, ceilings, and walls, and gravity that allows walking on each with no indication of which way is up. 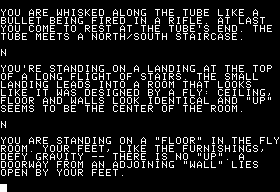 At this point, I was fatigued of mapping mazes, and called it a day.
Outstanding challenges:
My Trizbort map so far. Note that in the hydroponic garden, I have cut out most of the passages in order to keep it readable.
Email ThisBlogThis!Share to TwitterShare to FacebookShare to Pinterest