Moria: Too greedily and too deep

I returned to my DOSBox setup to take another stab at Moria. I had already tried playing as a half-troll, powerful in melee but bad at everything else, and a dwarven warrior, skilled at combat, exploration and survival though poor at stealth. Both ran into trouble with stat-draining monsters, especially the Red Naga who drains your utterly critical strength, which is prohibitively expensive to restore at the levels where you're likely to encounter them!

I thought for my third try I'd go for the polar opposite - a halfling mage. Weak as a kitten, I wasn't able to carry much equipment or be of much use in melee combat, but with enough magic power, perhaps I wouldn't need it.

Magic isn't quite like any game I've seen yet. There are four spellbooks in the game of incrementing expertise, and as a mage you start with the beginner's book, which contains these spells:

Immediately upon starting the game, you may learn any one of the L1 spells. Each time you level up, you may learn another spell within your level, provided you own the book. Further spells must be found in other books, whose availability circulate in the magic shop.

I started with magic missile, knowing I'd rely on it to survive combat. Casting a learned spell costs mana, and I made it a point to recover mana through rest whenever possible. This would mean I'd go through rations and lanterns quickly, but that was okay. I could always buy more.

I did learn very early on that you shouldn't cast magic missile at point blank range. Magic is not a substitute for melee skill; a kobold on the first level survived a close range blast and then one-shotted my level 2 hobbit mage in retaliation.

White worms also posed a problem for my mage, when they hadn't for previous warriors. 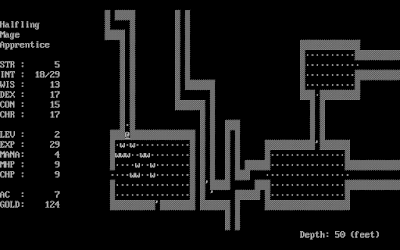 These creatures reproduce. My warrior characters could kill them faster than they could reproduce, but for my apprentice mage, this wasn't really an option, as after just a few casts of magic missile I'd need to rest to recharge, allowing them to breed replacements. This was perhaps a blessing in disguise; I could retreat into the tunnel where they couldn't overwhelm me, and score loads of easy XP by poking my head out to blast a few more. I eventually reached level 5 this way and had just enough mana to thin their ranks enough to pass through.

Being a mage also grants some really nice powers that just aren't possible otherwise. By level 3, I learned the incredibly handy Find Hidden Traps/Doors spell, which reveals them within a pretty wide radius, which is not only much better and more effective than searching everywhere, but also reveals staircase locations, saving you from needing to search absolutely everywhere if the staircase was all you wanted to find.

Unfortunately, on dungeon level 2, I got blindsided by a giant black bat which quickly chewed right through my HP.

I tried again with an elf, figuring he might stand a slightly better chance of surviving these situations.

With this try, I found a pretty effective way to haggle. Begin by offering 1/12th of the asking price. Feel free to round down or up to a nice round number. It will be rejected and counter-offered. Then offer double your initial bid, then triple, and so on until you meet in the middle. The first few bids might annoy the shopkeeper, which gets you a dialog distinct from the usual haggling banter and possibly ejected from the shop for a few thousand turns if you keep it up, but most likely you'll reach an agreement and save a good amount off the initial asking price.

In case you're curious about optimization, this is what I determined to be the formula for haggling:
Percent * (Current asking price - Your last offer)

"Percent" is an unknown variable dependent on the shopkeeper's disposition, but through trial, error, and logic, it shouldn't be too difficult to determine. The shopkeeper expects you to increase your bid by at least this much, and will get annoyed and possibly throw you out if you don't. The initial bid expectation is mysterious to me (it seems to be a shopkeeper-based percentage of the initial asking price) but I found that this formula will very accurately predict the shopkeeper's tolerance for being lowballed on every subsequent bid. Following it exactly is pretty boring though, so the 1/12th method seems to work well enough.

Selling follows this formula, to determine how much the shopkeeper expects you to lower your offer by:
Percent * (Your last offer - Shopkeeper's current offer)

There's no good way to find out their upper tolerance for the initial offer except to guess and back out. They will always ask you to make the first offer, and always reject it, with offense taken if it was too high.

After a few failed attempts, including one where the dungeon entrance dumped me right next to a monster that I could not kill with my paltry starting mana or fight, I managed to have a character who survived long enough to buy the next spellbook and learn some of its spells.

Magic missile remained my primary damage dealer even as I unlocked more advanced ones. It may not be the most powerful spell - hard to know for sure as the game doesn't tell you how much damage you're dealing - but at only one mana point per cast, it's certainly the most efficient one. Usually I'd be able to pick off monsters from a distance by flinging several magic missiles, dealing lethal damage before they'd get into swatting range. It has a small failure rate, and because it fails before you are prompted to enter a direction, muscle memory would cause me to tap a direction anyway making me walk toward the monster that I intended to zap.

Detect Monsters is another cheap, useful spell, that can do a lot to prevent nasty surprises, but since it only reveals them for a single turn, you must be diligent about casting it frequently.

Phase Door is a short-ranged teleportation spell that can get you out of a jam should you get blindsided, but it could also just teleport you deeper into it. Light Area is what it sounds like and is cheap and useful. Stinking Cloud damages groups of enemies in a radius, but at four MP it's pretty expensive for how much damage it does.

In the second spellbook, confusion is a terrific spell should you step through a door and bump right into something nasty in the dark. Sleep I is even better, though it has a higher failure rate, but if it works, you can skedaddle and rest to regain your MP before returning and blasting the sleeping baddie from afar. It's extra satisfying when the sleep victim blocks off a door so that his friends can't follow you. Lightning Bolt just seems like a more powerful Magic Missile, but for its cost of four mana I'd rather just cast Magic Missile four times. Frost Bolt is a whopping six mana and has a somewhat high failure rate, but by the time I got it, there were occasions where I really needed to kill something in a hurry, and couldn't cast sleep and retreat as there was nothing to retreat to. Lastly, Stone to Mud removes a dungeon wall, which isn't terribly useful except as a means of clearing a path to veins of precious metals revealed by a scroll of Find Treasure.

I did eventually save up and buy the third book of magic, and quickly learned Identify thinking it would be a convenient alternative to Identify scrolls, but at the level where I could learn it, the 87% failure rate just made it impractical.

After days of playing cautiously, and having a few close calls saved only by a timely word-of-recall scroll, I decided to start backing up my character on occasion. Hours later, I just wanted to see how far I could go without stumbling into a world of hurt, so I just took the stairs whenever possible without bothering to farm or grind. The answer is level 13, where I emerged right into a pandemonium of rapidly reproducing giant gnats and various other nasties including some invisible, dexterity-draining horrors. 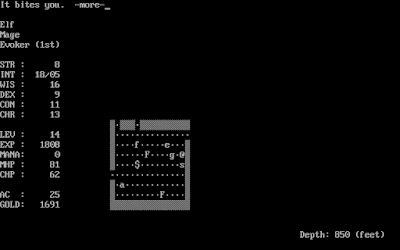