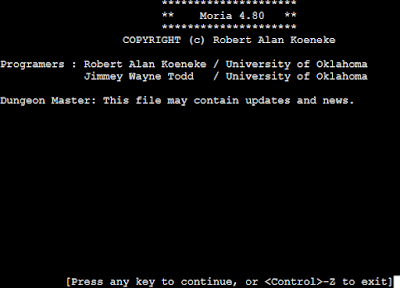 I've manually converted this version's helpfile to standard text, and it contains some information not found in later versions, such as tables for weapons and armor. Read it here:
https://drive.google.com/file/d/1h1l4lFrGD-RE0C6gA1_bVff9ANXgkGnC/view

Thanks to Adam Thornton, maintainer of Ancient Computer Mvsevm (and credited film performer), I am able to play a Koeneke-authentic original version of Moria on an emulated VAX/VMS system. Version 4.8 represents the final Pascal codebase before it was rewritten in C as Umoria, and is probably feature-complete. I did notice some differences in just a few minutes of play, though some could be attributed to luck. 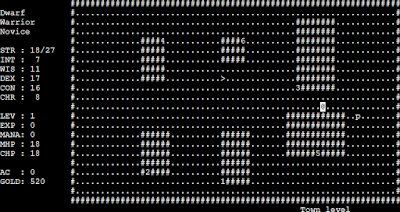 I decided to try playing as a dwarf this time around, who have strong fighting ability, and fairly decent skills apart from stealth. I bought a scroll of word-of-recall, using the haggle system to save a few pieces of gold, and some additional armor. Finding secret doors was, in particular, much easier than as a half-troll. I fought my way down to level 7 in a short order, where I found a nasty surprise. 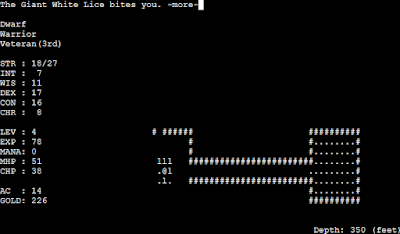 These lice never did more than 1 damage per hit, but reproduced much faster than I could kill them. So I retreated into the hallway, where they could funnel at me, and I gained two levels from the massacre. They kept coming without end, though, and the experience points gained were slowing to a trickle, so I recalled out, which isn't an instant action; it takes several turns for the spell to activate.

I figured I would farm gold for awhile on level 6 to save up for a potion of restore strength. I knew this would take awhile; a potion cost nearly 900 gold, a scroll of recall 300, and I was lucky to get 200 gold in a level run. The level and the gold in it could be regenerated by traversing up a set of stairs and down another on the level above.

Alas, I ran into one big problem with this method of playing Moria. When you load a saved character, it is deleted from the disk. The intent is to fight savescumming; saving will write it back to the disk and exit the game. Unfortunately, this means an unstable network connection can, and indeed did, ruin my progress after two good days of play.

Back to the DOS version it is then.