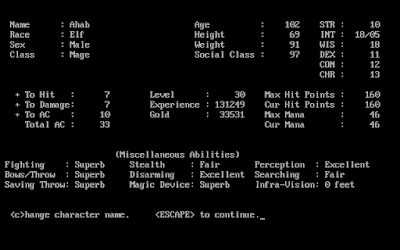 I've given up all pretense of trying to be fair about playing Moria. Progress is glacial, and setbacks are nearly unavoidable. From now on, I'm saving whenever I please, and loading whenever something I don't like happens. No more getting level-zapped because a spell with 95% success rate randomly failed twice in a row. No more running headlong into the breath of an Ancient Dragon that Detect Monster failed to reveal. Appropriate Roguelike caution can be damned at this point.

I've looked at spoilers too. To win, you really want these things:

I continued running level 50 for treasures. The Balrog, who I had no chance of beating yet, lurked here, and he isn't revealed by Detect Monster. If I bumped into him and somehow didn't get immediately killed, I'd Teleport away, and if I did get killed, I'd load and just avoid that part of the dungeon. Other monsters above my punching weight would be dealt with by Teleport Other.

I found another Gain Experience potion almost immediately, bringing me to level 31. Exploring the level and avoiding the Balrog's quadrant, I found little else of note except for a single potion of Super Heroism. Monsters were mostly manageable, especially with my new free savescumming. The worst was a Mature Red Dragon, who I'd send away as soon as I could.

After mostly clearing the dungeon, I thought I'd try to kill the dragon. And I managed, by getting in a lucky Slow Monster shot and kiting it to death. It dropped quite a bit of loot, none good, and I thought, why not savescum to get something good? I loaded and repeated the process, only saving again after landing several hits. Roughly twenty kills later, I found my first Ego weapon, a Thrusting Sword of Slaying Evil.

A Young Green Dragon walked in at that moment, and I savescummed a potion of Gain Intelligence out of it.

On my second run, with savescum-boosted drops, I found a scroll of Mass Genocide, a Ring of Lordly Protection (+5 cold), a potion of Dexterity, and a potion of Gain Experience, which brought me to level 33 and unlocked Word of Destruction.

At 21 mana per cast and a 75% failure rate, this spell is a perfect example of awesome but impractical. It obliterates item drops (and no, it doesn't work on the Balrog), so you might as well just use Teleport Other to deal with a monster you can't handle, or Teleport Self if you get swarmed. But when it works, it sure is impressively devastating.

The next thing I found was a Ring of Speed, which was incredible - normal speed monsters were now slower than me, and I could take on any of them, even Mature Dragons, by hitting them, taking a step away, and repeating as they wasted their turn walking right towards me or casting spells which usually didn't affect me. Only Mature Black Dragons with their armor-ruining acid breath made me hesitate to engage. Before long I found a second Ring of Speed, but didn't dare equip it yet - I needed a free finger for the Ring of Detect Invisibility for the time being.

However, I had a way of fighting Ancient Dragons. I'd have to temporarily equip both Rings of Speed so that I could outrun it. Then I'd dig out a corner of the dungeon to isolate it into a single-tile column, hide behind it, and then bash the dragon from the left and right flanks over and over again, like something out of a Tom & Jerry picture.

The farming continued and apart from junk I mostly found potions of stats and experience. The next good thing I found was an Amulet of the Magi, whose best attribute is revealing invisible monsters, allowing me to ditch the Ring of Detect Invisibility and equip two Rings of Speed permanently. And with this setup, I could even fight Evil Iggy, using the column-dance of death. I noticed, after equipping the double-speed rings, that I got hungry very quickly, but it's only a minor inconvenience to buy more food each trip and eat more often.

Some of the gear I found over the next few delvings, apart from more potions, were:

The Holy Avenger weapon and potions of invulnerability eluded me still. And I was in no shape to take on the Balrog, who could one-shot me with fire breath, or kill me in five normal hits, and hit up to three times per round. The column dance trick wouldn't work as he moves just as fast as me, and besides that can walk through walls. Fighting the Balrog was clearly hopeless.

Desperate times call for desperate measures, and I had a suitably desperate idea.

The Balrog is deadliest close up, where its attacks hit hard and can't realistically be avoided. From a distance, it has a small chance of using its instant death breath attack, or summoning undead monsters, or draining my mana.

What I did was I pelted it repeatedly with Magic Missile - still my most mana-efficient damage spell - using Phase Door to teleport a short distance away whenever it got close, and Teleport to get far away whenever mana started running low. Crucially, I'd load whenever it did anything except lumber in my direction or cast a spell, which usually failed and sometimes did moderate damage.

When his fire breath damage had diminished enough to the point where it didn't kill me outright, I knew I was making progress, and by my estimation was halfway done. The entire battle lasted nearly three hours and involved roughly 500 Magic Missile casts. That probably sounds very tedious, and it was, but compared to days of farming beforehand - and I can't imagine how long it must take if you don't savescum drops - it was nothing.

I suppose that had I continued farming potions, maxed out my INT & CON stats, and then allowed myself to get level-drained all the way back to 1 so that I could level up again and optimize my HP and mana, I might have even been able to use this strategy without savescumming. But it's done now, and I don't care enough to test this theory. I do wonder what are the actual rules governing drops for Holy Avengers and Potions of Invulnerability, since that seems to be key to beating the Balrog fairly, but have accepted I'll probably never find out. 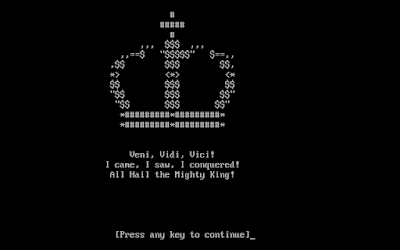 Measured by the ratio of hours spent playing to amount of fun had, this is by far the worst game I've played yet, apart from some that I spent no more than an hour playing and had no fun with at all. And  that's partly on me for thinking that I could beat Moria and enjoy doing it.

I went in thinking this would be something like Diablo, where you get better gear and better stats with each trip to the dungeon, and delve progressively deeper as you feel braver, and win better and better rewards with the ever-increasing danger. It started off something like that, and that's where the game was most fun. Even replays, trying out different types of characters and experiencing the game differently was entertaining for a little while. Never as much fun as Rogue, where the play was fast and chaotic and you don't expect to survive much longer than an hour, but it was something.

But Moria, at least in this version of it, falls apart when you try to win. There's an insurmountable difficulty wall that you just can't get over without the right gear, and you earn it by farming levels ad nauseum. The Youtube channel 30 Minutes of Umoria shows that it is indeed possible to win without savescumming, but it runs for about 90 hours, and that's with the incredible luck of finding a Ring of Speed on level 13.

This may have not originally been the case. CRPG Addict notes that according to Koenke himself, development was continuous from 1983 at least until 1985, and made things more difficult any time anyone (such as his friend Iggy, for whom Evil Iggy is named) won. The ingame version notes bear this out too, although they make no specific note of difficulty features, they do suggest that in 1983 Moria existed in a primordial form, with the dungeon generator, character generator, and "Moria Module" whatever that is added in May 1984, and the town level added into version 2.0 later that year. The versioning stops at 1985's "V4.0 Source Release Version."

Angband is hopefully something closer to what I was expecting from Moria, and its first public release is in the far-off future of 1993. In the much nearer future of 1984, we'll be looking at the first verifiable version of Hack, the predecessor to Nethack. For now, though, I'm kind of looking forward to the long string of mindless arcade-style games on the whaling log broken up by the occasional text adventure (plus Ultima III).