The year is 1981. Star Wars is a cultural phenomenon, the final film is in pre-production and under very tight wraps, and although there aren't any official Star Wars video games yet, the industry is full of unlicensed imagery. 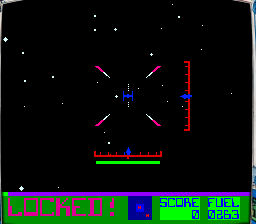 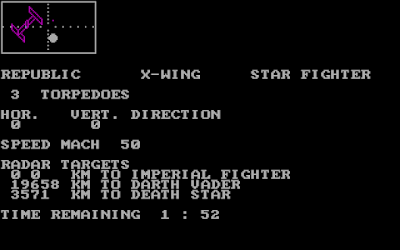 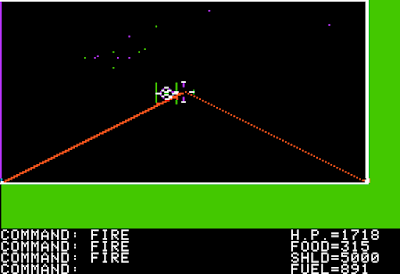 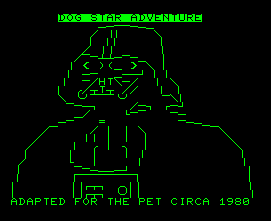 LucasFilm must have caught wind of this and determined to show them all how to do it right, and partnered with Atari (who, let's face it, had made the best space combat game yet; 1979's Star Raiders) to create the first official Star Wars video game. An early vector space shooter prototype at Atari called "Warp Speed" seemed like the perfect candidate for this, and over the next two years would be reworked into this Star Wars game. Parker Brothers beat them to the punch with two 2600 titles developed relatively quickly, but Atari's offering, which came out in May 1983 around the same time as Return of the Jedi, clearly has more lasting appeal.

The attack on the Death Star, which is the subject of this game, could be the single most frequently videogame adapted movie scene of all time. Mobygames lists five unauthorized adaptations of it from 1978 to 1980 alone, and there are many more generic space shooters that happen to feature TIE Fighters as enemies. Most are basic shooting galleries from a first-person perspective, which is probably the closest thing there is to cinematic immersion at this point. Star Raiders went the extra mile and presented a fully 3D space sim, but this style came at the cost of limiting how much action could be on the screen at once, and besides that, its gameplay was unthinkably complex compared to coin-operated arcade games of the day.

Atari's Star Wars takes a middle ground between 3D space sim and static shooting gallery, preserving the first person perspective and giving you limited control of your X-Wing's trajectory as it follows a set route to the Death Star, across is surface, and through the trench at the meridian. A steering yoke directly controls where your guns aim, but indirectly controls pitch and yaw just enough to help dodge projectiles and obstacles.

I played with a flight stick, and noticed ingame drift. As it turns out, the arcade game's yoke was self-calibrating, which made sense for an arcade environment where the game would run for hours without being reset, but for a MAME user this is a bit inconvenient as you will probably close the game whenever you're done playing, which erases the calibration data. The remedy is to move the joystick around in circles when starting the game for the first time, during the wave select screen. Either that or use a save state when it's calibrated properly and load it whenever starting anew.

The first phase is the approach, where TIE Fighters scramble to intercept you. The fighters launch slow-moving fireballs which aren't too hard to shoot down, but it's easy to become overwhelmed when you have several fireballs coming at you from multiple fighters. Shooting the nimble fighters themselves is worth 1,000 points each and means less pressure if you can pull it off - which is no simple feat given their quick, erratic movement patterns, not to mention how your attention becomes split between shooting the fighters and their incoming ordinance.

On later waves, Darth Vader in his prototype Advanced Starfighter will attack as well. He can't be destroyed, but a hit is worth 2,000 points and will cause him to spin out of control for a few seconds.

The second phase is the Death Star surface, which is skipped during the first wave and isn't fully realized until the third. Here you must dodge towers while shooting or avoiding fire from them and the ground turrets. If you can shoot the white tips of all of the towers - and your X-Wing makes several passes during this phase - it's worth a cool 50,000 point bonus.

Finally there's the climactic trench run, where turrets lining the sides shoot more fireballs, and on later levels you also have to pitch and weave to avoid the bridges that span it. And then at the end you fire your torpedoes by targeting the exhaust port and pulling the trigger. Doing this instantly finishes the wave, so don't worry about the incoming fireballs when the port comes into view!

Big bonus points - 100,000 from waves 5 and onward - can be scored by "using the force" by not firing a single shot until the exhaust port comes into view. This means you've got to dodge both the fireballs and the bridges, and the only way you can consistently dodge both is by baiting the turrets into firing low before you pitch high to avoid a bridge, and vice-versa. It's well worth it, unless your shields are so low that you don't expect to survive another wave.

Speaking of which, once I felt I was good enough at this game to survive Wave 5, I found it was far better to start there than to start any earlier and work your way there. This is because if you start on Wave 5 and finish it, you'll receive a one-time 800,000 point bonus, which is far more than than you could ever hope to score in the first four waves. My best game scored a little over 1,200,000 points, clearing two Death Stars and ending during in the trench of the third, so this bonus accounted for nearly two thirds of my best score.

GAB rating: Good. This was one of the last vector games ever made, and one of the best. The technology just lends itself incredibly well to fast 3D action games with minimalist aesthetics, and it's kind of a shame more weren't made. The shooting action here is fast, furious, well varied, and both immersive and fun, though it's a bit difficult for my aging reflexes.

Star Wars sold a very respectable 12,000 units - a far cry from the wild successes of earlier hits like Asteroids and Centipede, but it was becoming clear that the golden age of arcades was reaching its sunset. Within a year, Atari's B-team rushed-out a non-vector Return of the Jedi video while the film was still in the public's eye, while the core Star Wars team developed a proper sequel The Empire Strikes Back. Both were flops - Return of the Jedi was panned as graphically unimpressive, and Empire Strikes Back, being mainly sold as a Star Wars conversion kit, found few buyers willing to change a machine that was still turning a profit.

Star Wars is good played in MAME, but to get the full experience you've got to play in the deluxe sit-down cabinet. The feeling of sitting down in an X-Wing cockpit, the unusual flight yoke, and the look of a genuine vector monitor, where the enemy shots just glow in a manner that practically assaults your eyeballs, can't be emulated. I've been lucky enough to have this experience at the American Classic Arcade Museum in New Hampshire, where they have Star Wars in both upright and sit-down formats, and I sure hope they can survive this pandemic without having to sell off pieces like it.