As I begin writing this, Digital Antiquarian had just about a week ago published an extremely unpunctual article on 1983's Lode Runner (of which Miner is a prototype) despite having stopped covering that era almost eight years ago. Coincidence, or did Jimmy Maher scan my whaling log for backlog material and then beat me to the punch? Probably coincidence, but it's fun to speculate.

After Maher's typically well-sourced and riveting account of its development, there's no point to describe the game's history in detail again, but here's a short version. James Bratsanos, a student of UW, developed a game Suicide on his Commodore PET in c1980-1981, based on a friend's second-hand description of an arcade game that he never played. The next year, he rewrote it on the university's VAX-11 computers as Kong. It is described it as a monochrome ASCII game about navigating a 2D maze of platforms and ladders, collecting gold, being chased by monsters, and digging holes to trap them. Fellow student Doug Smith closely remade that game on his Apple II as Miner, and submitted a copy to Broderbund, who rejected it for publication. Smith made an improved second version, with color graphics and sound. It was accepted, and reworked into a third version, released commercially as Lode Runner to avoid confusion with the similarly titled Miner 2049er which was by then available on the Apple II.

Bratsanos has said in interviews that the arcade game described to him was Donkey Kong, but Jimmy Maher believes it more likely that his friend described Universal's Space Panic, that he renamed his game Kong when Nintendo's smash hit landed in the summer of 1981, and years later misremembered the actual order of events, falsely conflating the memory of Donkey Kong's success into Suicide's genesis. Neither Suicide nor Kong exist any longer as far as I know, but they represent the earliest germ of Lode Runner, and given its much stronger similarities to Space Panic than Donkey Kong, I concur with Maher's interpretation. Interestingly, Broderbund had previously published Apple Panic, an unauthorized port of Space Panic.

Smith's original version of Miner appears to be lost, like Bratsanos' game that inspired it, but the second version that got Broderbund's attention is available on Asimov. And I will cover it as an ancestor.

After I started, I quickly concluded that an early level here is impossible to finish, and the in-game level skip function doesn't seem to work. Fortunately, the levels are easily edited, and I've made my fixed version available here:
https://drive.google.com/uc?authuser=0&id=1WFSzEfdoLG_XSfT0AGVNSnTxsdh96-WJ&export=download

I've never played the original Lode Runner before, but I had played a demo of the Windows sequel. I quickly found that in this prototype, all of the basic elements are already here. Climb ladders, dig to the left and right to trap monsters, collect all of the gold on the level, and escape once you do.

It's reminiscent of Space Panic on a superficial level - you run through a stage made out of bricks and ladders while being chased by monsters, and can dig pits to trap them or descend yourself, but the differences all work in Miner's favor.

Not the least most important difference is that the controls are vastly better than Space Panic's, and the tile-based level design and controls absolve you of the pixel-precision that Space Panic demanded. The controls aren't by any means perfect, and you'll definitely want to use joystick mode over keyboard, as the twitchy keyboard movement scheme can easily send you sprinting right past ladders and ledges with a single key tap. Even on joystick mode, I died several times because the game dropped lightly tapped directional inputs, or registered a push longer than intended and moved me two spaces when I only meant to move one, but it's still much better than Space Panic, and it's also generous enough with bonus lives that you can afford the occasional deadly mishap.

Level 03 is the unbeatable one, owing to both a bug and some level design errors. 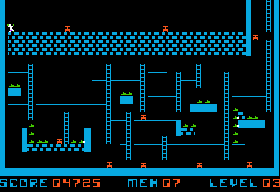 First, there is a bug that makes it impossible to grab some of the gold. The two leftmost pieces and the two in the center can only be reached by dropping onto the floating platforms from the hangbars above. Unfortunately, landing on the gold from these bars causes it to disappear without awarding points or credit for collecting it, making the level unwinnable. This can be fixed by raising the corresponding bars up a tile.

Second, after collecting the gold on the rightmost platform, it is impossible to reach the ladder to the right, or to return to any of the platforms on the left. This is fixed by extending the ladder's length downward.

Miner does have a level editor on the disk, but it lacks any preview function, and it's much easier just to extract the level file in text format, tweak it in Notepad, and put it back on the disk. This is what I did.

There are 20 levels in total, beginning with level 00, and when you reach 20, it loops back to the design of level 01, though the counter keeps increasing.

I made it to level 20 on my second real attempt and recorded the playthrough. During the latter half I am beating levels 12 through 19 for my first time, so I make a lot of mistakes that aren't edited out or undone with save states. I'd still earned enough bonus lives from the previous levels that I could reach level 20 with a surplus - this game isn't all that hard. The resulting playthrough video is a bit more authentic than most, as you can see me struggle with unfamiliar puzzles and layouts and fail repeatedly as I gradually figure things out, rather than demonstrate obtained proficiency from start to finish.

GAB rating: Above Average. Miner needs a bit of polish in the controls and graphics department, but the planted seeds of a winner are already evident. Kong and Smith's original prototype modeled after it may be lost, but it's easy to see why Broderbund took immediate interest in snatching this one up and fine-tuning it into a commercial-quality product.

Up next is Lode Runner, and I must admit I'm a bit apprehensive. Miner's 20 levels already feel like they exhaust the gameplay possibilities that the engine allows. Lode Runner, as far as I know, introduces no new gameplay mechanics, it merely tightens up the existing ones, and this is supposed to sustain itself for 150 levels? I've been pleasantly surprised before, but the notion of enduring this much Lode Runner sounds exhausting. We'll see in the new year.