I have a distinct memory of playing Paratrooper, but I can't remember when or where. The gameplay of shooting down waves of paratroopers from your immobile rotating turret was instantly familiar, but the real confirmation was that I could pre-envision an almost Frogger-like skull icon appearing to represent the splattered corpses of those who fell to their deaths after I shot out their parachutes. What's strange is that I also have a memory, though a less distinct one, of this game having a violence option, which was enabled by default and caused the paratroopers to smash bloodily on the ground in a manner reminiscent of Lemmings. I spent a good afternoon trying to find any evidence that this option ever existed, perhaps within a fan remake or modded version of Paratrooper. I could not, and concluded that this may be a false or conflated memory.

Paratrooper is among the earliest games for the IBM PC, an expensive latecomer to the 8-bit microcomputer market, which nevertheless quickly dominated the business world. Eventually it would dominate the gaming world too, as mutually compatible competitors dragged its price down, CPU speeds increased, and better gaming-oriented hardware surfaced. But in 1982, pickings were slim for games, and the most popular home PC configuration sold for about $3000, more than double the price of the similarly-specced Apple ][+.

CGA graphics are possibly the most defining feature of early PC games, and are most comparable to Apple II graphics, offering a variety of modes optimized for text or bitmap color graphics and lacking any sort of tiling or sprites. CGA had advantages compared to the Apple II's corresponding modes, but the disadvantages are more evident and more remembered.

Through the composite interface, games could output 16 colors at better resolution and clarity than the Apple II's hi-res mode, which was limited to six.

But the best remembered CGA graphics modes, fairly or not, are 320x200 RGBI. These modes are perfectly sharp, displaying color graphics or text without any of the rainbow artifacts or haloing present in all hi-res mode Apple II games. Each pixel can be addressed separately, and their colors aren't partly determined by neighboring pixels or phasing offets. The problem is that you were limited to three foreground colors over a background of a solid one (usually black), and all of the foreground palettes were ugly - cyan/magenta/white were the most commonly used, whereas the Apple II hi-res mode had a far more useful palette of green, purple, white, orange, and blue, and could simulate even more through dithering. I really don't understand why IBM didn't make red/green/blue the default palette, or allow software-definable ones.

Before playing Paratrooper, it turns out that this nearly a carbon copy of a lesser-known Apple II game called Sabotage, published in 1981 by On-Line Systems. 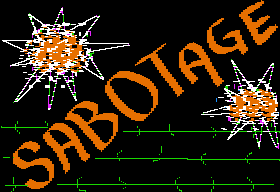 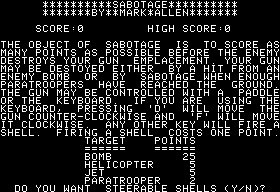 Sabotage on the Apple II can be played with a keyboard or paddle, and paddle is definitely the way to go. Like other keyboard-controlled Apple II games, held keys are not recognized, and here each keystroke adjusts your angle by the smallest increment, and larger adjustments are made with repeat taps. It's not a great setup for an arcade style game, which was clearly designed around the rotating paddle.

Paddle controls are intuitive, but not instantaneous as in Breakout. The paddle position essentially determines where you would like the gun to be pointed, which automatically pivots at full speed until reaching that position. It does this is fast enough to avoid feeling laggy as Apple Galaxian does. Holding the trigger fires rapidly, which you might actually not want to do, because of how scoring works.

Every shot fired costs you one point. With the paratroopers only worth two points, you're only scoring one point each even with perfect shooting accuracy. With 50% shooting accuracy, you're not scoring any points from them at all! And you must focus on them when they start jumping; you lose the game if four touch down on either side of you, or if one lands right on your platform. It's possible to kill a landed paratrooper by shooting out another's parachute so that he falls and crushes the first one, but you can't count on getting this chance. Helicopters will form the bulk of your score, even though they can't harm you directly, and not all will even drop paratroopers. At five points, they're still not worth much unless you shoot them very accurately.

Waves get tougher over time, with more helicopters and more paratroopers. Later there will be bomber raids, whose bombs are worth a nice 25 points if you hit them, but will instantly kill you if even one hits the ground.

Eventually, the paratroopers (or a bomb) will slip past your fire and administer the coup de grace.

GAB rating: Below average. This was fun for a few minutes, but got old fast. It doesn't help matters that the first few minutes of play are really easy, and therefore not fun once you know what you're doing.

Paratrooper is one of two games by Greg Kuperberg released through Orion Software in 1982, the other being "PC-Man."

Paratrooper uses that infamous cyan-on-black color scheme. Which isn't quite as bad here as in other games thanks to a minimalist look, but it's still downgraded from the Apple II original. 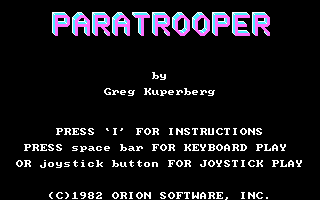 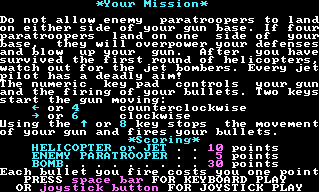 I couldn't get joystick input to work properly here - no matter what I did, the gun was pivoted a bit to the left in neutral, and was unable to pivot all the way to the right, making it impossible to shoot targets in that periphery. Which is very unfortunate, as my paddle, which is read by Windows as a joystick, otherwise worked perfectly in this game.

Thankfully, keyboard controls are better than in the Apple II version, though not perfect. Tapping a direction makes the gun begin turning, and it will continue turning until it cannot, or until you fire. This scheme means that you cannot sustain sweeping fire by turning while firing to fill an arc with your deadly shrapnel, which is something you can do if playing with a joystick. It makes me wish there had also been a key which meant "fire but don't stop turning."

Paratrooper is a lot more difficult than Sabotage! Right off the bat, paratroopers jump more often, fall faster, and open their parachutes closer to the ground than before. On the flipside, your gun can fire more rapidly, the parachutes are bigger targets, and the scoring system is much more generous. The bombers come sooner, and hitting their bombs with keyboard controls is a bit of a crapshoot - I had much better success against these waves playing with a paddle, even though the lack of full rotating coverage makes it unsuited for general play.

GAB rating: Average. Sabotage bored me, but Paratrooper entertained me for a little while, and I attribute this difference entirely to the steeper difficulty curve. It's still not a game I intend to replay, though.
Email ThisBlogThis!Share to TwitterShare to FacebookShare to Pinterest
Labels: Sierra On-Line