The first sign that something was horribly wrong here was when I tried hitting backspace after mistyping the name of the opponent who I wanted to play, something surprisingly easy to do as even the parser has a habit of dropping inputs. 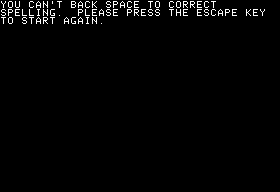 I've heard horror stories about user-unfriendly mainframe line editors like TECO, and I remember being unable to backspace in VAX/VMS, but this is the first time I've ever been personally given the proverbial middle finger when I tried to backspace something on a personal computer. Even my old typewriter supported this, in conjunction with correction tape to fix mistakes. Why was it so hard to program a functional backspace key? Why are we even typing in names anyway? There are only two opponents to choose from, and no other part of the game's interface requires you to type anything, not even placing bets.

Hitting escape forces you to rewatch a 15 second intro animation before you can try again. 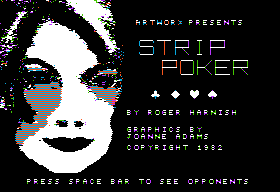 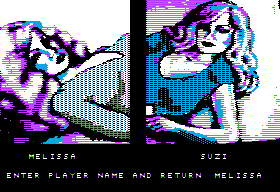 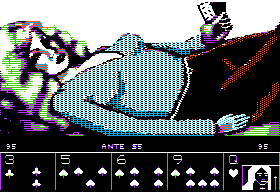 I showed this to my partner "D," who laughed at the display here, the weird colors, and Melissa's impractically casual poker-playing pose. "What are you rating this one," she asked, adding "I'm rating it bad unless I see some titties!"

And you'll see titties, alright. You might want to finish this entry later if you're at work, but odds are you aren't.

The poker interface is driven entirely by using left and right to select options and space to confirm. I think the intent was to be joystick-friendly, but the Apple II version doesn't seem to support joystick input. I found that the tiny font is barely legible on the Apple II's color monitor which has been known to produce rainbow pixel artifacts, and the monochrome cards aren't as easily read as they should be - couldn't they have simulated red with dithering, or at least used orange in its place?

Wagering uses some obsolete betting terms that I'm not familiar with. When you lead the bet, the initial choices are "Bet," "Stay," and "Drop." Drop means fold; you forfeit the ante and the hand ends. Stay means check; you give her a chance to place the first wager, and if she also stays, then you both discard and ante-up again. Bet means just that; place a bet from $5 to $25, and then she must call it, raise it, or drop. I'm not sure why you would ever drop on the first wager when could can just stay without committing to anything, but it's there.

Apart from that, rules are straightforward five-card draw, with a second round of betting after the draw. When a player goes in the red, an article of clothing is wagered for $100 credit, but is only removed if the hand is lost. When a partially disrobed player wins a hand and has over $100 in reserve, an article is automatically bought back. You have three articles, Melissa has four.

I played very cautiously at first, more interested in gathering data than winning. I'd never drop, always call a bet, and always respond to a stay by betting the minimum. This wasn't a winning approach, but I learned some useful data on Melissa's strategy.

A strong predictive factor of how good her hand is, is what she does immediately after the drawing phase when it's her turn to bet first.

And when responding to my own $5 bets right after I draw:

She doesn't bluff much after the drawing phase. It happened once when she raised $20 and had nothing to show for it but a high ace, but that was clearly an outlier.

Perhaps an even stronger tactic is using the number of drawn cards to predict her final hand.

Obviously, she draws three whenever she's got a pair, and draws 1 whenever having a two pair or chasing a straight or flush. She never draws 4 or 5, so drawing 2 indicates a good chance that her hand is weak, depending on her bet afterward. Notably, a draw 2 followed by a stay never had anything better than a high ace, and a draw 2 followed by a call had pairs 1/3 of the time, and high ace or lower the rest of the time. Draw 2's followed by big bets or raises usually meant good hands.

I found little predictive power in her initial bets, so I didn't bother to analyze them.

Armed with knowledge, I employed a new strategy - call or bet the minimum until the draw phase, then guess what she's got, and either bet big or drop accordingly. She wound up dropping an awful lot once I started pushing big raises, and pretty soon some other things started dropping too.

Took me about half an hour to remove all of her garments, which included two layers of underwear. 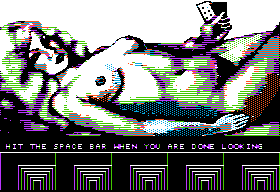 Suzi has the exact same lines and wisecracks as Melissa, but wears fewer undergarments. I beat Suzi with the same strategy, but it took me almost an hour, even without this handicap. I couldn't tell if her tactics were different, or if she just got good hands a lot more often. 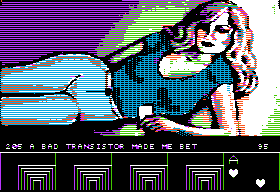 There were also two expansion disks, one featuring two more girls Marlena and Candi, and one with two dudes Tony and David. To play, you first boot off the expansion disk, select your opponent, and then must insert the original game disk to play. 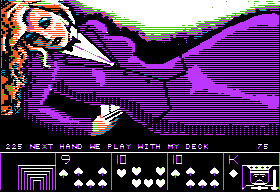 Again, the wisecracks are identical, but for what it's worth, Marlena definitely has a distinct playing style from the previous two. She drops a lot. But when she doesn't, there's a good chance it means she's going in for the kill. But she also seems to get overly excited when holding a high pair, and I've seen her go all in on two kings (she won but still).

GAB rating: Below average. It's functional, and the graphics aren't altogether dreadful. The poker game presentation could stand a good deal of improvement, the game would flow better if it had used the keyboard more efficiently, and it all runs a bit slower than I wish it did. But issues aside, it's just a very basic poker game, I didn't have much fun playing it at all, and there were always better erotica options than this.
Email ThisBlogThis!Share to TwitterShare to FacebookShare to Pinterest