Transylvania, an Apple II text adventure with graphics in the vein of Sierra's early titles, is another one of those games with a complicated release history, and it's none-too well documented.

Penguin Software's flagship product of 1982, The Graphics Magician, was the third graphics suite developed by its founder Mark Pelczarski. He had been especially fascinated by the hi-res color graphics of The Wizard and the Princess, and sought to create a highly compressible graphics format using similar vector-based techniques. During its development, teenage hobbyist programmer Antonio Antiochia reached out seeking advice on how to add graphics to his own adventure game, sending them a text-only demo copy. They were impressed, and as The Graphics Magician was tailor-made for this kind of project, they sent him a pre-release copy and offered a publishing deal with generous royalties. Transylvania became a collaborative effort between Antiochia and Penguin. Antiochia drew most of the graphics, and Penguin polished and rewrote his code in assembly and integrating his graphics. Penguin released the final product concurrently with two arcade games; Pie-Man and Spy's Demise, which had also been created by outside developers using The Graphics Magician. I tried the former, and found it to be a poorly controlling, poorly playing gimmick title with okay but unremarkable animated graphics and a completely unsustainable difficulty curve.

Transylvania's original Apple II release, and the one I'll be playing, is copyrighted 1982 and was ported to the Atari, Commodore 64, Macintosh, and Japanese micros in 1983-1984. 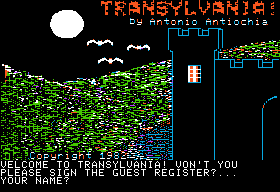 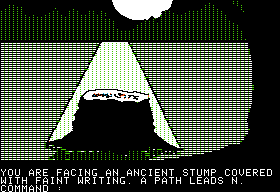 A second release is copyrighted 1984 by Penguin Software, requires an Apple //e, and features enhanced graphics that use its 16-color double hi-res mode. This version appears to be Apple II-exclusive. 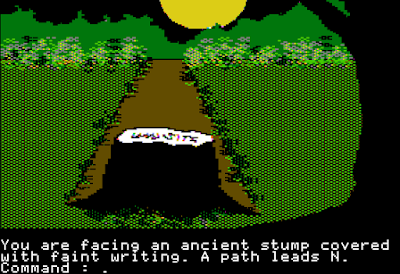 Finally, there's a third release copyrighted 1985 by Polarware, rewritten in an engine called "Comprehend," featuring new locations and puzzles, and occupying a two-sided floppy disk. Graphically, it's a downgrade from the 1984 edition, with 6-color graphics that seem to be based on the 1982 original with some tweaks. Apple //e is supported but not required, and enables mixed-case text, which is in all-uppercase when played on an Apple ][+. The Amiga, Atari ST, DOS, and iPhone ports appear to be based on this final version. 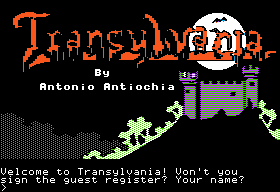 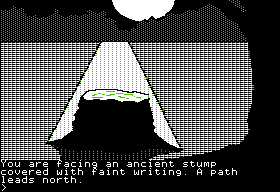 The original game's manual is pretty sparse, with just two pages with general gameplay instruction and tips, nothing we don't already know about the genre, and no backstory except a vague reference to a distressed damsel who needs rescuing.

Starting the game, you're asked to enter your name, and also your next of kin, which as far as I can tell serves no purpose. A distant clock strikes 12, and the game begins.

As always, I began my adventure by Trizborting. Graphics can be toggled off, and you should probably make a habit of doing this once per room, as not only does the text transcript often take up more than the two lines allotted in the mixed mode, but the text mode also uses that very handy Adventureland-style screen split with clearly designated exists in the room description pane. 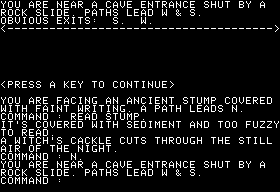 Although the stump can't be read, before long I found a note in the woods reading 'SABRINA DIES AT DAWN!'

The game world is not very large. I found exactly 32 rooms in my initial run-around, and only one blocked-off apparent egress. But my ability to interact with the environment quickly became hampered by a werewolf that just showed up and wouldn't leave me alone. 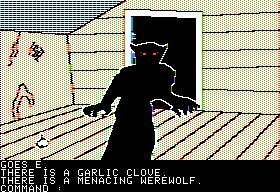 This cursed monster seemed to just start showing up randomly, and when he did, I could simply walk away, but doing anything else was certain to get me killed.

To the north of the forest was an old two-story house, where I found a load of bread and a flintlock pistol, but nothing else of interest. To the southeast, a goblin tantalizing me with a key, and a hut where a vicious cat guarded a vial of acid and a broom. To the northwest, a cemetery with a wooden cross left at a gravestone, and a statue which, when examined, a voice within cried "HELP!" Sabrina, I was certain. 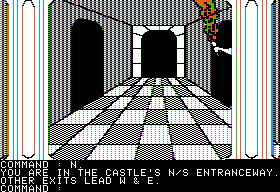 A crossing in the middle of the forest lead further north to a castle, where a vampire wandered and could be annihilated with the cross. Exploring, I found flypaper in a room on the first floor, a sealed sarcophagus hidden in vines growing at the top of a spire, a dungeon where some pie-baking penguins plugged Pie-Man, and a treasure room where I found a ring. During this exploration, the bells rang one, reminding me that my time was limited.

Exploring the forest just a little more thoroughly, I discovered that a broken-down wagon in the woods could be climbed aboard, and on it, a coffin opened. Inside, I found a corpse (obviously), some mice, and a silver bullet - just the thing for the werewolf! If only he would leave me alone long enough that I could take it. 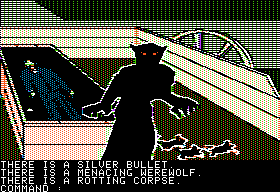 I restarted and went for the wagon immediately, where I took the bullet, and scooped up the mice too. The werewolf started stalking me almost immediately after this, and even followed me into the house, but by walking around enough I was able to shake him long enough to grab the pistol and load it. We met again soon, and I was ready.

The mice distracted the cat in the hut, allowing me to take the acid and broom, and the acid dissolved the sediment on the stump, revealing a message that said "KNOCK HERE." So I did. 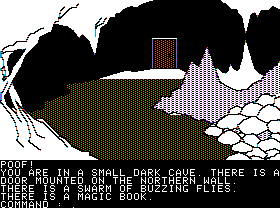 The magic book had instructions on how to use elixirs, but the only way out I could tell was locked, and I guessed that the goblin had the key. So I reloaded an earlier save. I fumbled around for awhile, discovered, through that unique type of adventure game logic that you can shatter the statue by showing it the ring (and inside is not Sabrina, but an alien), but this wasn't immediately useful. Eventually, I had to turn to a walkthrough for the next step.

What I was missing was a point of interactivity inside a log cabin. 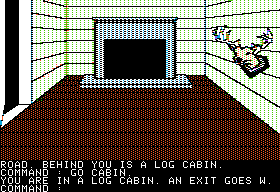 I had tried going into the fireplace but was told I couldn't. I had tried taking the trophy, but the game didn't recognize that word. I had incorrectly deduced from that, that the trophy was just for decoration. You're supposed to "PULL HORNS." 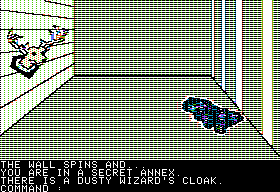 Searching the cloak, I found a lockpick. So I went back to the cave, caught a few of the flies with some flypaper I found in the castle, and picked open the lock, which led deeper into a cave, where a crystal ball revealed a clue I didn't need; an image of a cloak-wearing mage tapping a statue with his ring.

I was still stuck in the cave, but found out soon you can leave by trying to take the magic book - its owner just zaps you right out.

The flies fed a frog by a lake, who gave me a magic password "IJNID" to deal with the goblin. This spooked him away, and his key opened a locked grate in the cemetery, where I found an elixir.

After wandering around some more, I found a UFO hovering by the field where the statue was. I tried boarding it, but everything went black, and I found myself outside again, with a burning circle of brush where the UFO used to be, and a mysterious black box in my inventory, a weapon of some sort. I returned to the sarcophagus in the castle spire and blasted off the lid, revealing its occupant! 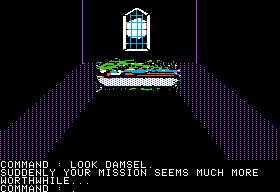 I followed the magic book's instructions on elixirs and she awakened.

So, like the dashing hero that I am, I picked up the princess (adding her to my inventory), returned to the lake, and sailed home to a hero's reception. 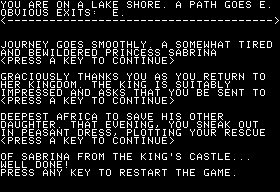 Now that I'd won, here's the ways you can lose that I know of: 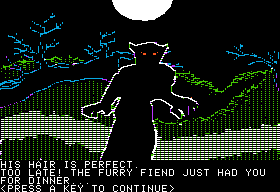 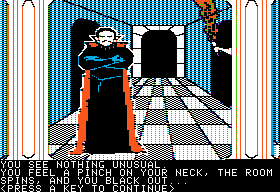 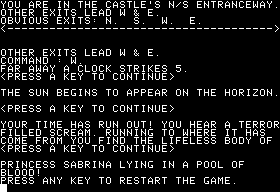 GAB rating: Above Average. This is easily the best non-Infocom adventure I've played yet, structured like a Scott Adams adventure combined with some of the good qualities of Sierra's titles of the day and none of their problems. Like Adventureland, the game world is lean, compact, and yet also nonlinear, with few filler rooms, no mazes, the parser is simple and generally hassle-free, the puzzles are reasonable, and the interface well streamlined and accessible. Like The Wizard and The Princess, there's a good sense of setting and character, superior prose thanks to the expanded capacity of the floppy disk format, a quest that isn't just another treasure hunt, and of course color graphics depicting every room. These graphics are better than any Sierra game to date, and do a consistently good job of illustrating which things are interactive. And it feels more polished than the games of either family.

But also like Adventureland, it's very short, and feels a bit inconsequential due to this brevity. I also could have done without the inventory limit, which, along with having quite a few red herring items, serves only to annoy and not extend gameplay in any meaningful way. It's really, though, the short length and simplicity which, although it keeps the game from overstaying its welcome, also keeps the game just short of a "good" rating.

For the sake of completeness, I also played through the 1984 edition, which few sources acknowledge the existence of. From what I can tell, the content is unchanged from the 1982 edition. I'll play the expanded 1985 edition later, much later by my estimation, but for now here are some screenshots showing off the 1984 edition's higher resolution and color depth: 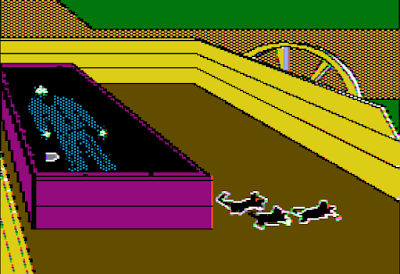 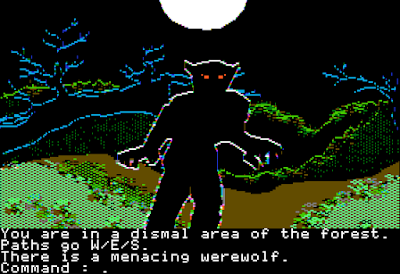 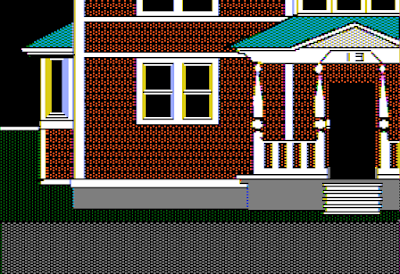 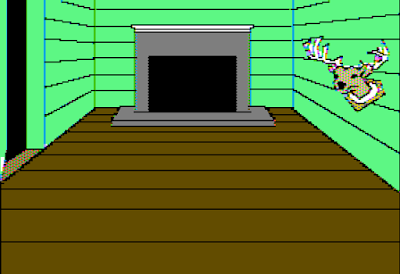 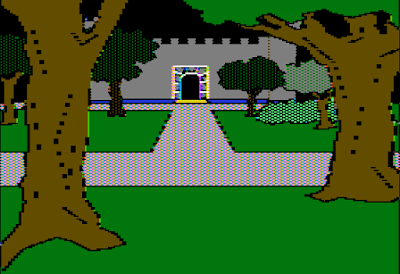 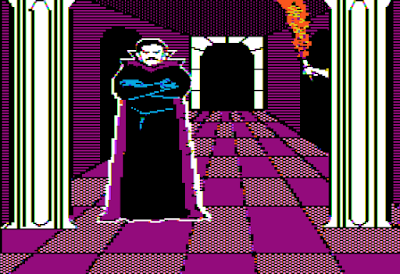 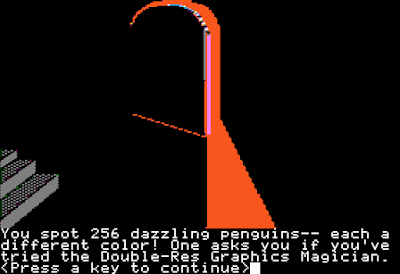 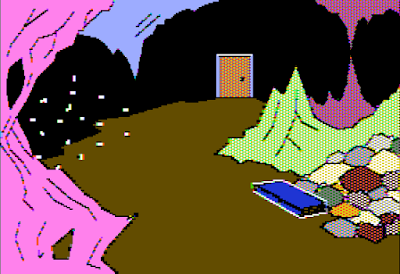 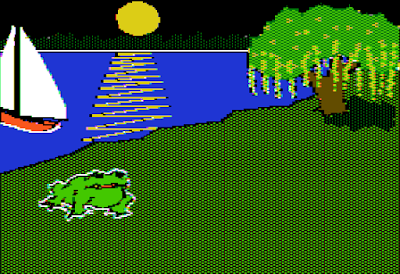 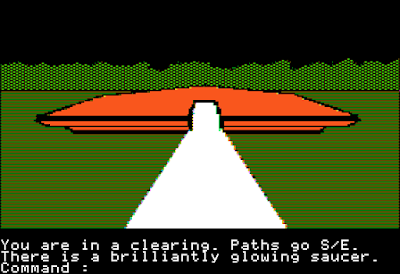 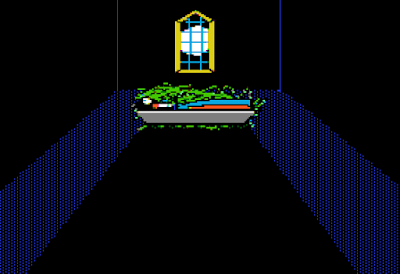 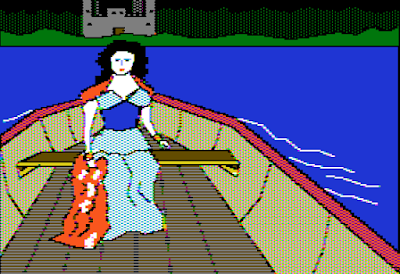 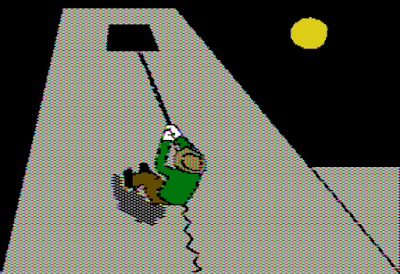