Play dnd and other PLATO games at Cyber1:
https://www.cyber1.org/

I am certain I read about dnd for the first time on Wikipedia. Its pedigree is impressive; we have a multi-level dungeon, a good variety of equipment, a boss monster and end goal, and this predates Rogue by about five years, without anything previous to reference except pedit5 and original Dungeons and Dragons. 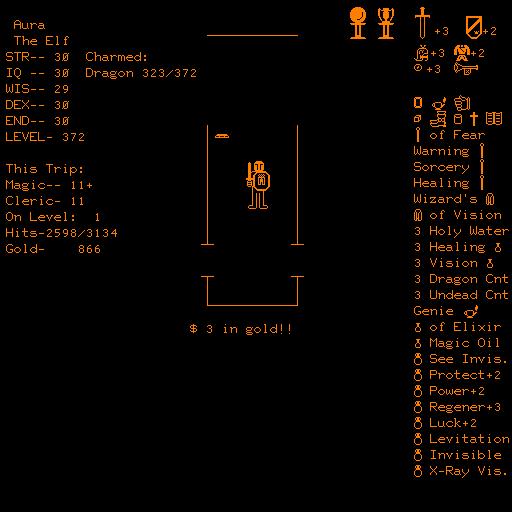 This screenshot from Wikipedia suggests dnd is also an early example of extreme power creep. A character about to win has stats nearly maxed out, is level 372, and has over 3,000 max HP. What is this, Disgaea? It’s my understanding that D&D characters rarely even made it to level 10, and stats remained the same no matter how high you leveled. In pedit5, you win by reaching level 6. 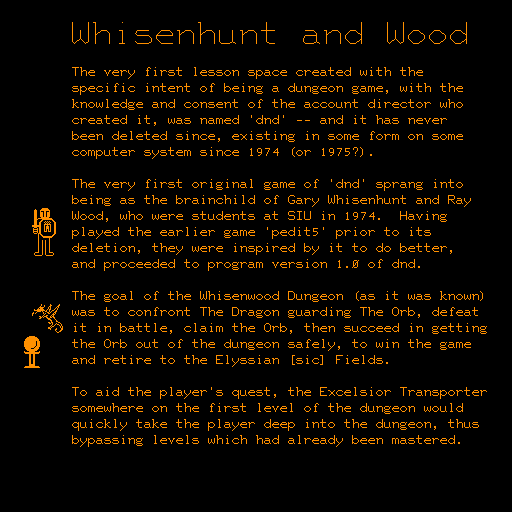 Like most, if not all computer games of the era, dnd went continuous development, and it is no longer possible to play it in its original form. The Cyber1 network hosts a history file on its development, written by collaborator Dirk Pellett. It states that the earliest versions were developed by Gary Whisenhunt and Ray Wood no later than 1975, were partly inspired by pedit5, and later versions incorporated enhancements by Dirk and Flint Pellett, including a bugfix that required a major rewrite of the game code. The final chapter directly accuses Daniel Lawrence of plagiarizing dnd with what eventually became Telengard. 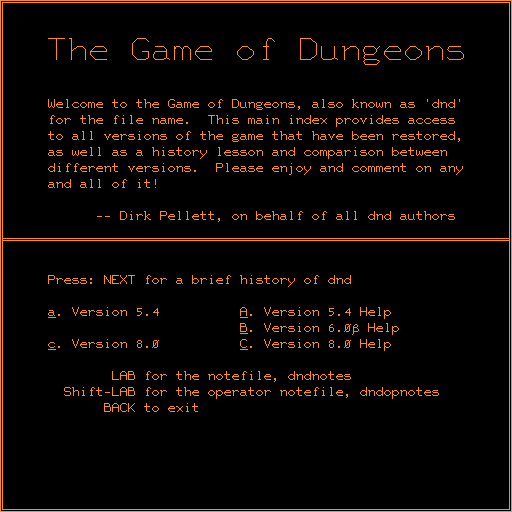 On launching dnd, the title screen shows two playable versions, and helpfiles for three versions. It’s interesting that you can view the helpfile for version 6.0b, but can’t actually play it. Of the other two, v5.4 is copyrighted 1977, and v8.0 is copyrighted 1978. The helpfiles show that v8.0 is a much bigger, much more complicated game. Because I am interested in dnd as it influenced Telengard, I’m going to stick with playing v5.4. The enhancements in v8.0 could not have influenced DND as that game was developed in 1976, and probably did not influence Telengard either. Even so, the earlier v5.4 is still newer than DND, so it almost certainly also contains elements that weren’t in what Lawrence played at Purdue University in 1976.

The helpfiles are even more extensive than in pedit5, and indicate that even v5.4 is a much more complex game than it. However, they’re very light on information about monsters, giving little more than a few spell suggestions (e.g. don’t cast Charm on Death). And it seems there are far fewer types of them, only seven types compared to pedit5’s 30, though they come in multiple levels. 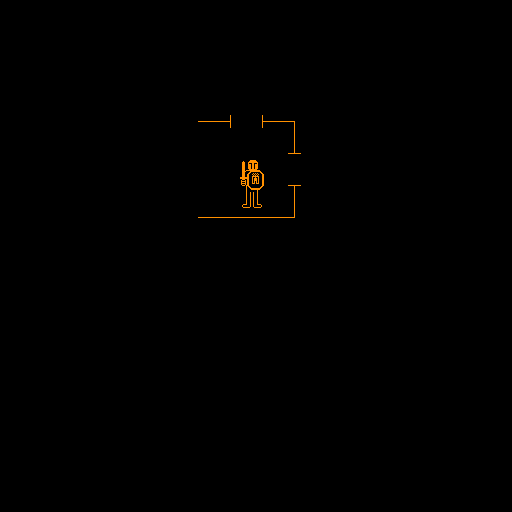 So on first glance, this looks an awful lot like pedit5. The look and feel is the same, combat gives you the same choice of fight/escape/magic, and fighting is a crapshoot, though the odds seem better than in pedit5. There seems to be a maximum amount of damage a monster can do to you in a fight, but early on, a single fight against any monster could still be fatal. When you run out of magic points, leaving would still be wise. But there are some differences that become evident early on. I never fought anything but level 1 monsters on the first dungeon level. The game does not remember where you’ve explored in between runs from what I can tell, so there’s nothing stopping you from doing repetitive level 1 runs repeatedly in search of treasure.

With a single exception, all spells are available from the start, and they all cost 1 SP from their respective pool (spells are still split between mage and cleric types). In combat, there are 14 spells available, seven of each type, and all of them either do damage, or have a chance of instantly killing:

The instant kill spells will do nothing if they fail. Unfortunately, like in pedit5, there’s no way to tell if a damaging spell did non-fatal damage or if it failed. Different monster types also have different levels of resistance, and many spells are useless on certain enemies. Sleep, which was the most reliable spell in pedit5, is now only useful against wizards, men, and “glasses.”

In addition to those spells, a mage point can be spent any time to pass through a single wall, and a cleric point can be spent to check magic items for traps. Finally, teleportation costs 2 mage points and one cleric point and can take you up or down a level, but has a 10% chance of failing and taking you in the wrong direction, which is almost certain death if you’re low on power and want to go up to safety, and instead accidentally go down into unfamiliar territory in a weakened condition.

Gold is now a different resource from XP. It’s found everywhere, and you automatically pick it up when you find it. But the real money is found in treasure chests, which are often trapped. Checking for traps is safe but usually tells you nothing. But finding treasure early on is critical; you gain HP and more importantly SP by finding gold, and although it’s easy to gain 100-200 gold in a quick run with a fresh character, you need 10,000 before you get your first extra SP. A single chest can easily have over 20,000.


This creates a vexing gambler’s dilemma; often I’d find a chest, and visual inspection would fail to reveal anything. Is it worth the risk? Maybe it’s not trapped. Or maybe I can avoid the trap by opening it carefully. The odds of safely opening an unidentified chest are pretty good, and the reward is awesome. But if you set off the trap, you probably die. Chests are so uncommon and visual inspection works so rarely that it’s very tempting to take the chance, and this blew up in my face quite often.


There are also magic items, though rarer than chests. They are trapped more often than chests, and there is no way to disarm them, but you can inspect them visually or cast a clerical trap detection spell, essentially giving you two chances to detect the trap instead of one. Level 1 is probably a great place to farm items.

There are potions, which are unlabeled and can have a variety of effects. Occasionally a potion is poison; a clerical detection spell will sometimes tell you whether it is poison or not. You can also sip the potion to determine the effect with 100% accuracy before you drink it, but if it’s poison you will take some damage. I never wound up sipping poison, but the helpfile says the damage is less than if you Quaff it. Effects usually only last for the duration of your run, such as doubling the gold you collect or restoring HP, but occasionally boost your XP or strength permanently.

Exploring the dungeon, I quickly found that mapping is going to be essential; there are invisible pitfalls and teleporters all over the place, and you aren’t notified when you step on one. You are silently taken down to a random location on a lower floor, and the only clue is that the wall layout changed very abruptly. Getting lost on a lower floor is effectively a death sentence.

It’s also apparent that the Sleep spell isn’t nearly as useful as in pedit5. More than half of the monster types appear to be immune. On the plus side, monsters are only level 1 as long as I stay on dungeon level 1, and damage-dealing spells usually kill them in one hit. Usually.

From this revelation, I decided my first long term goal would be to get some statistical analysis of monster spell resistance. It’s tedious work, but if it means I don’t get killed on dungeon level 20 because I wasn’t sure whether to zap the level 280 glass with Flaming Arrow or Eye of Newt, then it’s worth my time to do this now.
Email ThisBlogThis!Share to TwitterShare to FacebookShare to Pinterest
Labels: PLATO