Play pedit5 and other PLATO games at Cyber1:
https://www.cyber1.org/

To be frank, I wasn’t looking forward to playing this game. I think I first heard of pedit5 around 2010-2011, in Wikipedia’s chronological list of RPGs, where it was listed as among the first ever made. Early CRPGs already have a reputation for being unplayable, even to unusually dedicated retro gamers, thanks to obtuse rules, convoluted controls, and merciless gameplay. If an “old” game like The Elder Scrolls: Arena is so hardcore that the Skyrim devs couldn’t get out of the starting dungeon (for the record, I could), how much of a nightmare is the earliest known CRPG going to be?

I’d been curious for a long time, though, but not quite curious enough to invest time in actually playing it. In late 2011, I came across a Let’s Play on RPG Codex:
https://rpgcodex.net/forums/index.php?threads/lets-play-pedit5.58028/

At the time, I figured that was enough education for me without me actually having to play it. My first takeaway was that this game had an impressive amount of documentation. It actually explains how combat works, exactly how having 15 strength is different from having 16 strength, and even shows you the monsters and their HP/XP values.

Second takeaway? This game still hates you. It will happily spawn hopeless fights that permakill your fledgling character, or worse, you could survive several fights, even level up, maybe survive for several hours, and then randomly encounter a level 6 dragon who instantly burninates you and all of your invested time with you.

That’s about par for the course for early Dungeons & Dragons, from what I understand. Death comes easily, can’t be undone, and isn’t always your fault, so don’t get too attached to your characters or progress. Of course, permadeath in CRPGs isn’t unique to this era. Wizardry had it, Nethack has it, and it’s still common enough that the term “Roguelite” identifies games with it. But all of these games tend to give you enough tactical options that if you play smart and cautiously, you have a pretty good chance of surviving a session. Here it doesn’t seem like you have many ways of minimizing the chances that pedit5 throws a deadly encounter at you long before you have a way of surviving it, and if you fail the escape throw (and inside rooms, you always will), you are dead. Since the game and your save files are hosted on Cyber1, savescumming is impossible, as it was in 1975. If you die, you start over.

So here we are seven years later. I signed up for a Cyber1 account to try it myself. I won’t retread ground that Elzair already covered, but decided to see if I could persevere a little more.
My first character had impressive strength, mediocre intelligence, and pathetic constitution and dexterity.

Entering a few corridors, I encountered a level 4 hobgoblin. Since the helpfile said sleep always works on monsters level 4 and below, I cast sleep and killed it. That was my only spell, so I left the dungeon right away so I could recharge and try again.

On the second entry, I encountered a level 1 man, and killed him easily and took his paltry treasure. A few seconds later, I encounter a level 6 dragon. 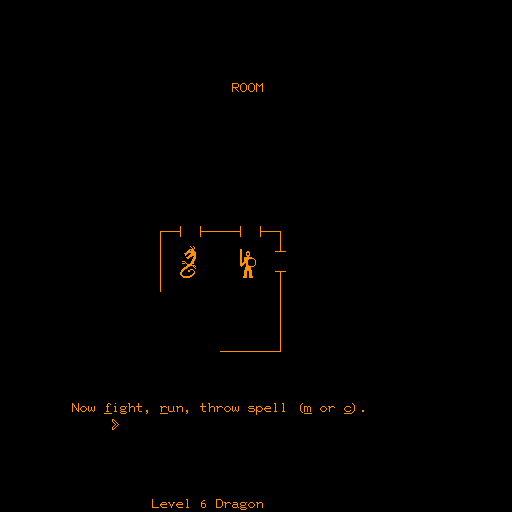 Crap. Even though it looks like I have the option to run, it only works in corridors, never in rooms, so I fought. Unsurprisingly, I’m dead, and I’m sure it wasn’t even close.

My second character found jewelry during his first trip, and killed a few rats on the way back as I beat it to cash in the jewelry. I was successful, and gained 4,000 XP for it. This is a big deal – you need 20,000 XP to win the game. Killing a dragon is worth a mere 840 XP in comparison. On the next run, I delved farther into the dungeon, won several easy battles, until I encountered a level 1 rat with 500 pieces of silver. Easy money. On the way back, I kill several level 1 “stirges,” but was done in by a level 1 man.

Goddamnnit. I’m not even sure if I did something wrong or not. Maybe my HP was low? It hadn’t occurred to me to check it; I just assumed that I survived those fights unscathed.
I kept trying. I lasted between 2 and 10 minutes with each character. A fresh character gets only one spell per run regardless of stats, and the available spells at first are:

There’s a spell called “Light,” but it doesn’t seem like you can ever cast it. The helpfile says it reduces “surprise,” but nothing happens when you try to cast it. Your spell points don’t even decrease. I’m guessing that this spell was never programmed; it has a * symbol in its name, as do a few other spells which I’d later discover also can’t actually be cast.

Also, and I’m guessing this is a bug, the level 2 spell “blastobolt” can be cast during combat, but it always fails, and doesn’t deplete your spell points. All other level 2 spells can’t even be cast yet, as indicated by the helpfile.

These spells can only be cast in combat, and it’s trivial to decide which one to use in which situation. Sleep always works against 16 of the 30 enemy types, and never works against anyone else. Charm only works on goblinoids and humans. Since sleep always works on non-undead at levels 1-4, charm is only useful for level 5 and 6 humans and goblinoids, which make 4 of the 30 enemy types. Magic missile is to be used on anyone else, particularly the undead.

For a while, none of my characters managed to even come close to gaining 1500xp, which gets you your first upgrade; a single cast of a cleric spell. Starting characters are just so vulnerable. Encounter a level 5 or 6 monster in a room? You’re dead. Encounter one in a corridor? You’d better run, and if it doesn’t work, you’re dead. Encounter an undead of level 2 or higher? You’re probably dead, and definitely dead if 4 or higher. Encounter a monster 4 or under? Cast sleep and kill it, then run back to the entrance and hope you don’t encounter anything level 2 or higher, or you’re probably dead. Even level 1’s can kill you if you’re forced to fight.

Nearly all of my deaths occurred in rooms, not corridors. Mechanics are different in rooms. Running away usually works in corridors, but it never works in rooms, even though you are given the option to try. Rooms are also the only place where you will find treasure, but only in rooms that your character hasn’t explored yet, so I kept going to unexplored rooms in search of treasure. All too often, I’d encounter an enemy in a room, kill it with sleep, and immediately trigger a random (and fatal) encounter before I even take a step.

Also, for all of the information that the game gives you, I wish it gave me more. I know what spells to use in what situation, but deciding whether to fight, run, or cast a spell really depends on how confident you are about winning a fight, and I have no idea how to determine what the odds are.
For instance, the helpfile tells me that strength affects the chance of hitting a monster and the damage done, but what is the base chance and base damage? What happens when I miss, and what happens if I do non-lethal damage?

I can’t deduce any of that from the outcome of combat; the only information I get is which one of us was killed, and if it wasn't me (and if I remembered to check my stats before and after), then how much damage I took. During one session, a 10HP character fought a level 6 ogre and won, taking 9 damage. The very next session, the same character at full health fought a level 2 harpy and lost. I really have no idea how combat works in this game, so how do I make smart combat decisions? If I encounter another harpy, should I use my only mage spell point to cast sleep and risk being flattened by something stronger? Or should I fight the harpy and risk losing again?
Email ThisBlogThis!Share to TwitterShare to FacebookShare to Pinterest
Labels: PLATO