During my second day of trying pedit5, I gave up on trying to give my characters unique names and just called them all “a” to save time. I discovered that you can re-roll stats by hitting the BACK key and then the LAB key.

One of my characters managed to find some gems and reach level 2, giving me access to a second mage spell and one cleric spell. Cleric spells that actually work include:

From here on, I always made sure to have a “Protection” spell active.

Having Protection and an additional mage spell slot improved my survival odds per run considerably. It’s hard to say how much of a difference Protection made since surviving straight combat is very random as-is, but two mage spells clearly made the difference. For the next several runs, I would cast protection right away, venture into the dungeon, use a spell (usually sleep) as soon as I encounter a monster, and then high-tail it back, with one sleep spell in reserve in case I need it.

Alas, I got overconfident during a run. I proceeded as normal, got farther into the dungeon than ever before, and encountered an animal just outside of a new room. I killed it with magic, but instead of turning back, I just had to see what was inside the new room. Inside was another monster that I killed with my last spell. Turning back, about halfway home, I encountered a level 6 man in a corridor. Running was not successful, and he killed me.

But I actually enjoyed the game somewhat as that character. There was finally some tactical depth, and a palpable sense of risk and reward. That sense could not have existed if I knew I could just roll a new character and reach level 2 again.

I adjusted my exploration strategy. I started mapping the place out, and importantly, I kept track of which rooms my current character had already explored. Unexplored rooms are the most dangerous places, followed by explored rooms, and corridors are the safest as you can run away in them. 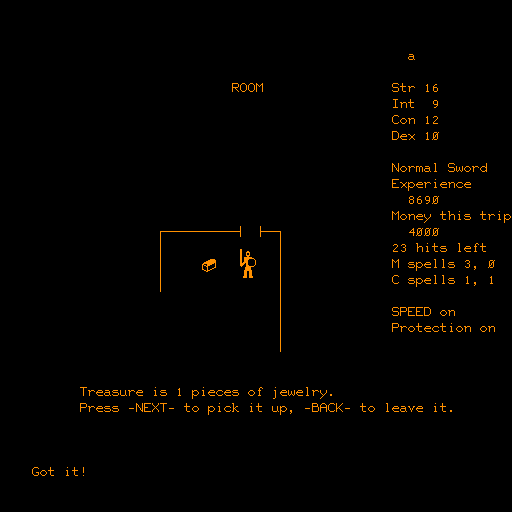 From here on, I’d cast Speed at the beginning of every run, followed by Protection. Speed also effectively makes Protection last twice as long.

I never wound up using any of these spells, but only Serious Cure looks all that good. Hold may basically replace Charm, but Charm is rarely useful in a situation where Sleep wouldn’t be better. And Dispel Myth seems like it would only be useful against Level 5 Wyverns. All of the mythical beasts weaker than it are susceptible to Sleep, and the only mythical beasts stronger are dragons. I encountered a Wyvern only once, and decided to use Blastobolt rather than Dispel Myth, since I had no idea how reliable Dispel Myth would be.

Soon after getting access to these spells, I encountered a level 5 scorpion. Even with 13 HP, protection and speed and a +1 sword, and a zap with magic missile before the fight, it killed me.

But I kept at it, and in about two and a half hours, I won the game. It was a slow victory, and most of the XP gains came from gems and jewelry, but it was a victory. I still kept retreating whenever I had used any magic at all; a level 5 character gets enough mage points to cast Speed at the start, Sleep/Magic Missile four times, and a final cast of Blastobolt. I might have been overly cautious, but I really didn’t want my character with over 12000 XP to get caught MP-less while retreating. 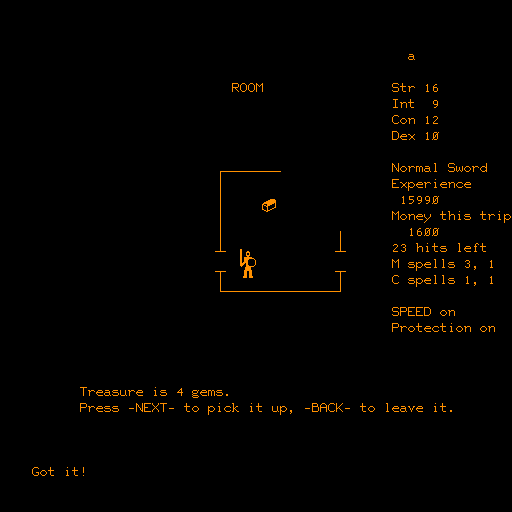 Another piece of jewelry brought me closer to victory, and the lesser rewards from silver, gold, and monster kills kept adding up. Finally, during a run, I encountered a level 5 wyvern in an unexplored room, and cast Blastobolt for that last bit of XP needed for retirement. I hightailed it out, killing a level 2 goblin on the way out with my sword. 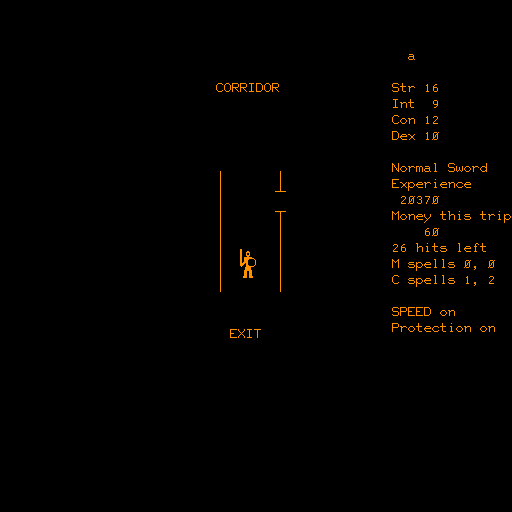 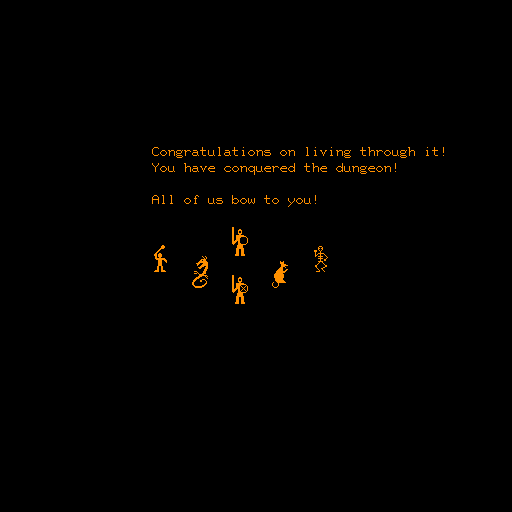 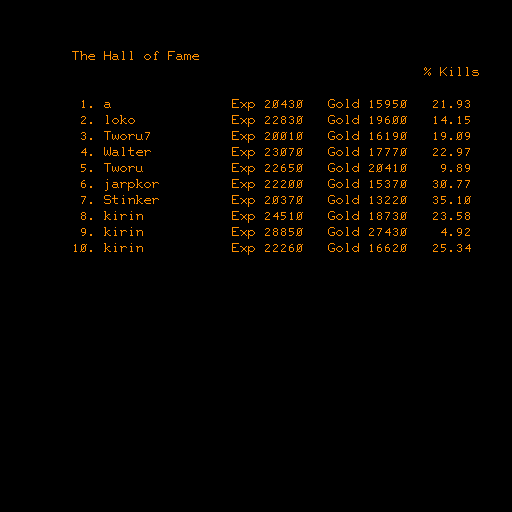 I win! And I’m at the top of the hall of fame too! That said I’m not really sure why; kirin in position 10 did better all around. Maybe I’m just the most recent player to win?

The "% Kills" field must refer to the relative amount of experience points gained through combat rather than treasure, and I'm surprised that it's even that high for me. That's 4,480 XP, and the strongest monster you can reliably kill with Sleep is only worth 200 XP. Anything stronger needs Blastobolt, there's no certainty that it will work, and the strongest thing I ever killed was worth 600 XP. I trust the game is recording my kills accurately, but I wouldn't have at all guessed that "a" endured nearly that much combat. From the looks of things, 21.93% is a pretty average experience.

"kirin" at #9 must have had a very lucky run with lots and lots of jewelry and few or no serious enemy encounters. At 27430 gold, that's much more than is needed to win the game, and only 1420 XP came from fighting.

I did get some enjoyment out of this game, but only after putting a lot of joyless failed attempts into it. Once a character gains a level, survivability increases by a lot, but you’re never really safe. The last few runs were downright nail-biting; powerful as I might be, I still had to treat every encounter like it could kill me, and I had to go pretty deep into the dungeon during those runs before retreating. The farther in, the more opportunities there are to screw up and die on the way back home. My victorious character never encountered a single level 6 monster, and I still have no idea what the odds of surviving such an encounter would have been. Even level 5 monsters compelled me to use Blastobolt, which doesn’t guarantee a win, and leaves you MP-less and vulnerable even if you do.

Oh, and one last thing. At the very start, when it tells you to press Up to enter the dungeon, you can actually crash the game by pressing any other direction. 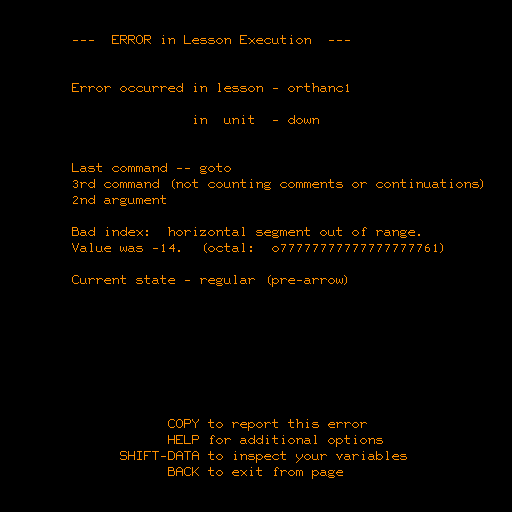