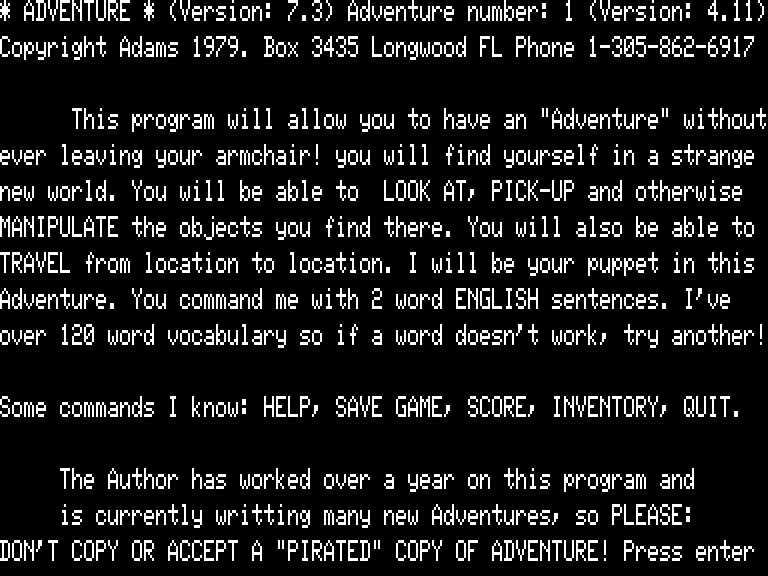 Interesting that this title screen refers to the game as “ADVENTURE” rather than “Adventureland.” 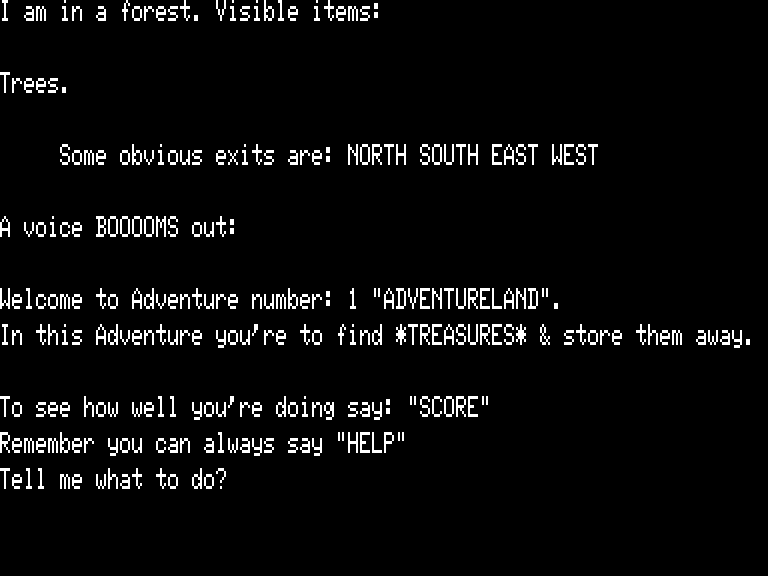 Right away, I appreciate that the game tells me simply what the interactive objects and exit directions in a room are. This will make exploring and mapping – always my first steps in a game of this nature - a lot easier.

Like Adventure, there’s a starting area above ground. This time it’s more interconnected, and every single room has interactive things in it. Adventure’s had nine rooms, and aside from the building and the grate, none of these rooms had anything in them. Here we have:

Also at the top of the hole, there is a sign with a plug for Adams’ next game, Pirate Adventure. 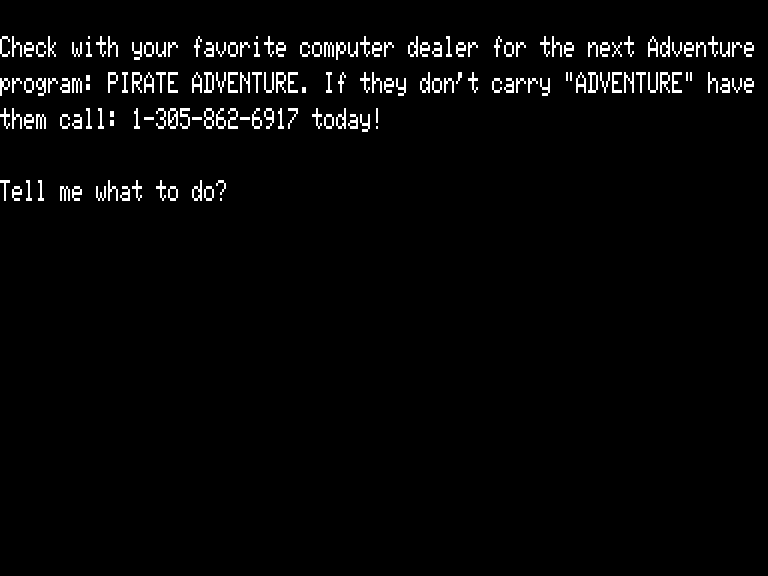 The “hole” region is not present in the BASIC version of Adventureland, and neither is the ad. In that version, the tinderbox is located underground and isn’t needed to light the lamp. I am guessing that this area was added to the machine language version of Adventureland, at which point Pirate Adventure had already been coded in BASIC, and was in the pipeline to be ported to machine language and released (or re-released) through TSE.

It’s evident that Adventureland is deadlier than its PDP-10 predecessor. Adventure’s starting area was perfectly safe. Here, the very first room you see on leaving the forest has a sleeping dragon! He’s harmless at first, even throwing the axe won’t bother him, but if you make a quick visit to the swamp and back then the smell of mud will wake him up and he’ll eat you. The chiggers at the swamp will bite you, and these bites will infect and kill you if you don’t slather mud on them. If you mess with the web at the top of the cypress, its spider will bite and kill you. And if you descend the hole too far… 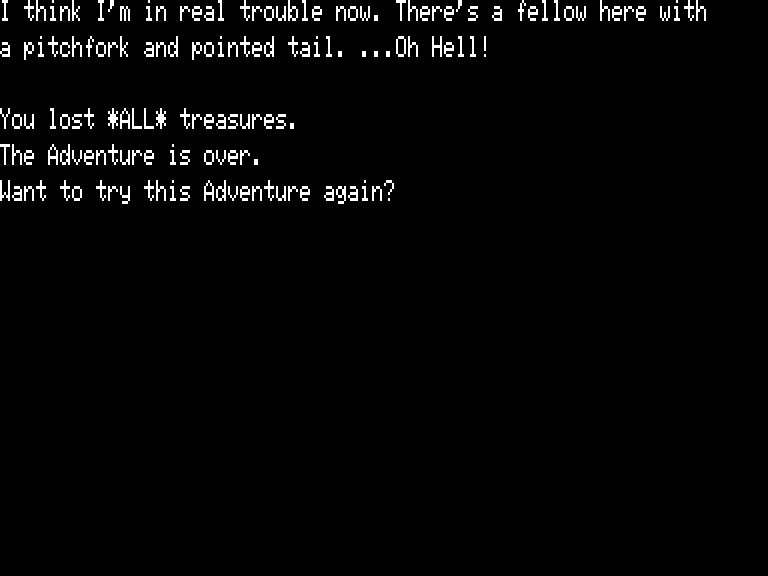 Adventureland isn’t playing around. Fortunately, saves work fine. They’re a bit cumbersome and inconvenient thanks to the tape format; you have to load a blank cassette file, type “SAVE GAME,” then rewind the tape, hit record, and press enter. Then you wait for about fifteen seconds and watch as the tape advances, and eventually stops recording. To load, you quit, start a new game, say “Y” when asked if you want to restore a saved game, and then rewind the game, then hit play, and press enter and once again wait for the tape to advance and play back your saved data. In the older BASIC version, this process takes over six minutes!

It didn’t take me long to figure out how to retrieve the treasure in the bog, which involves a moon logic puzzle, but the solution is literally signposted. A second treasure is found, unguarded, in the hidden grove past the swamp. The message in the web in the cypress tree says “Chop ‘er down!”, which I did (after taking the keys), revealing an explorable stump with another treasure and a locked door further down. This is good design; you won’t know to chop down the tree if you haven’t already climbed it, and so you probably took the keys while up there. If you didn’t, the game lets you know that something fell from the tree and sank in the swamp, and soon afterward you’ll find the locked door, ensuring you know that you screwed up before you waste too much time.

Past the locked door lies the cave system, and unsurprisingly, it’s tiny. Past a sloping hallway lies a big cavern room branching in four directions. Two of them lead to immediate dead-ends, one a hexagonal room with bees and honey, one to a silly joke room. 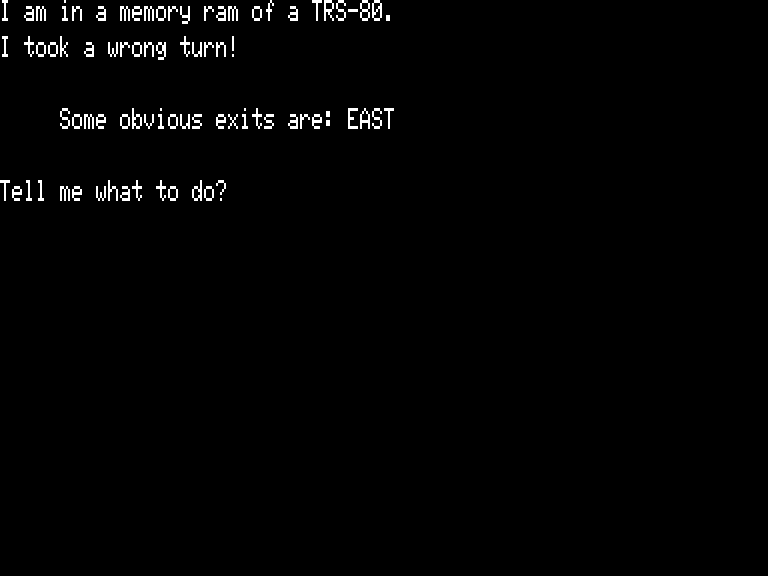 Southward from the cavern leads to a bricked window, and a clever puzzle involving gathering swamp gas from above and igniting it to blow it up. But then there’s just a linear series of ledges leading to a bear guarding two treasures. You can feed it the honey, but the honey is also a treasure, and you won’t get any more, so this is clearly not the correct solution.

Downward from the cavern lies a mercifully simple maze with two treasures, and at the end of it a chasm room that appears to be below the ledges mentioned previously. On typing “look lava,” the program announces there’s something in it, but refuses to get any closer. The maze can’t be left the way you got in, but a solving a signposted puzzle gets you out.

And that’s it. That’s the entire cave system of Adventureland. All that’s left is to find the 13 treasures by solving the puzzles. Four of them are lying around in plain sight, there’s another four that I gathered already by solving easy puzzles, and one more that I gathered soon afterward. That leaves the two treasures guarded by the bear, and two mysteries, and I’ll bet one of them involves the lava.

I solved one more puzzle on my own, but it was incredibly annoying. If you’re carrying mud and an empty bottle, you can take some bees, keeping them in the bottle. I brought these to the dragon in the meadow. The problem is, every turn, there’s a random chance that the bees will die in the bottle from suffocation. You could go back and get them again, but there’s a decent chance your mud will have dried up too, forcing you to go back to the swamp for more mud, then back down to get more bees hoping the mud doesn’t dry out again, then back to the meadow hoping the bees don’t die again. So I’d save to the cassette every step or two, and reload whenever my bees died, which was constantly. Often I’d have the bees die, load, and have the bees die again immediately on finishing the load before I had the chance to make a move! 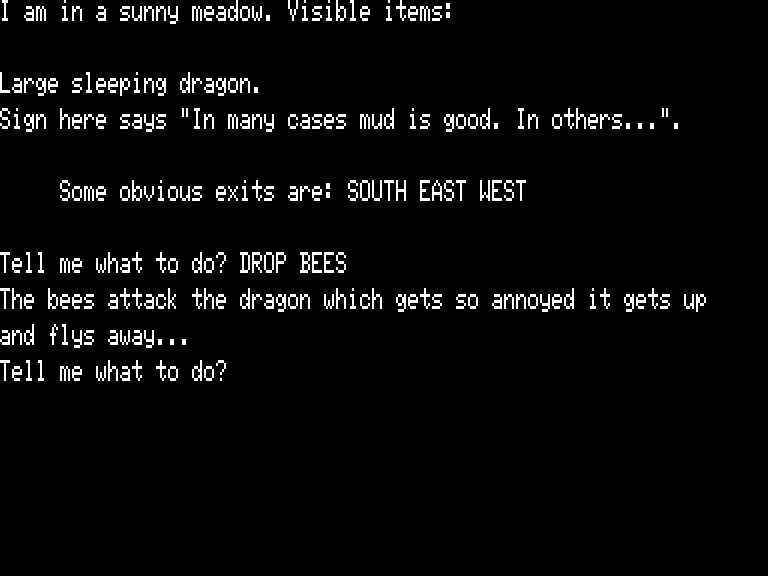 To get the last three treasures, I needed some outside assistance. To get closer to the lava, you need the bricks from the window, then to go to the bottom of the chasm through the maze and type “DAM LAVA.” 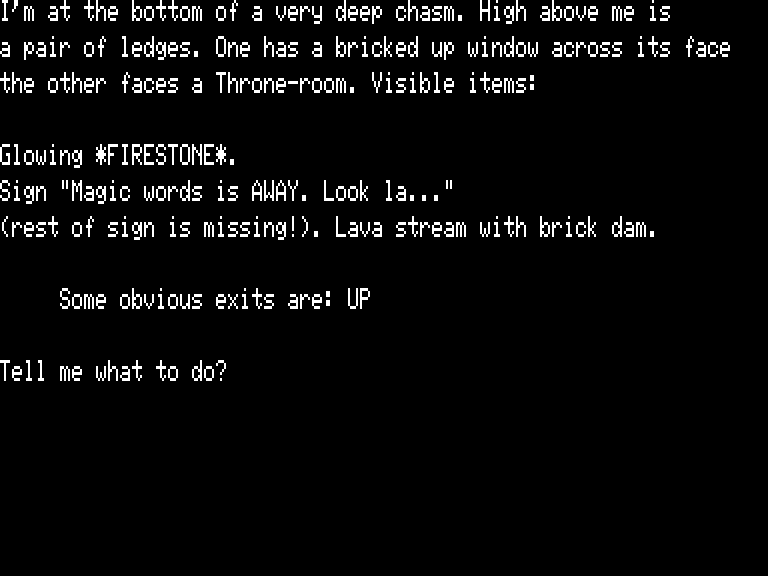 Then pour water on the new firestone, and take it!

Eleven treasures down, two to go.

To deal with the bear, you have to yell at him. Seriously. Then you can get the last two treasures, bring them to the stump, and win the game. 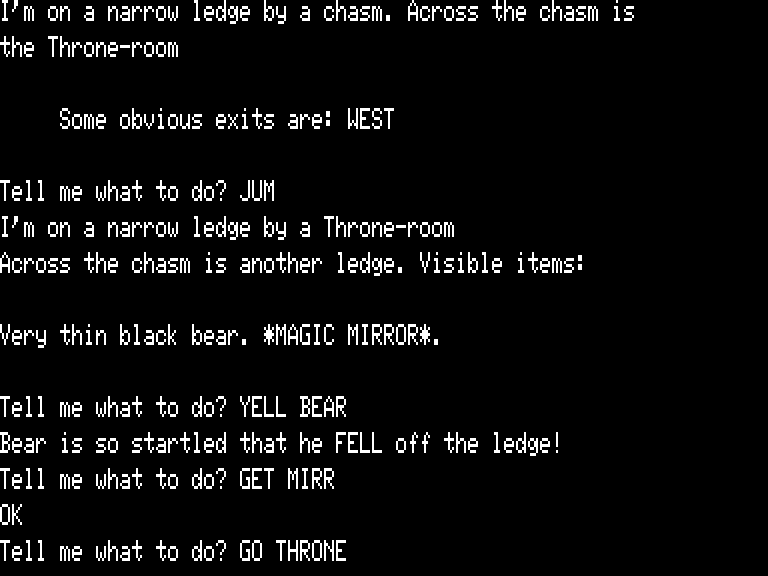 On dropping the mirror, it gave me a hint that I didn’t need. 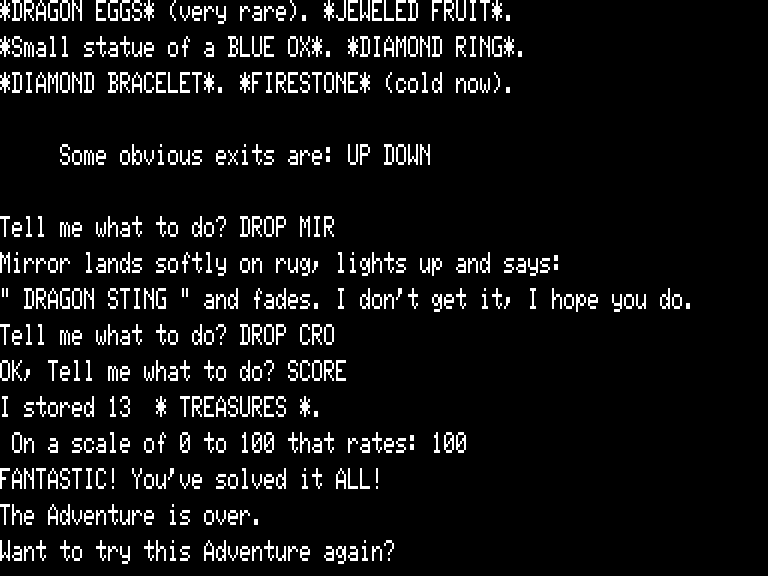 Incidentally, if you go back to the bottom of chasm below the maze, there’s now a dead bear there. 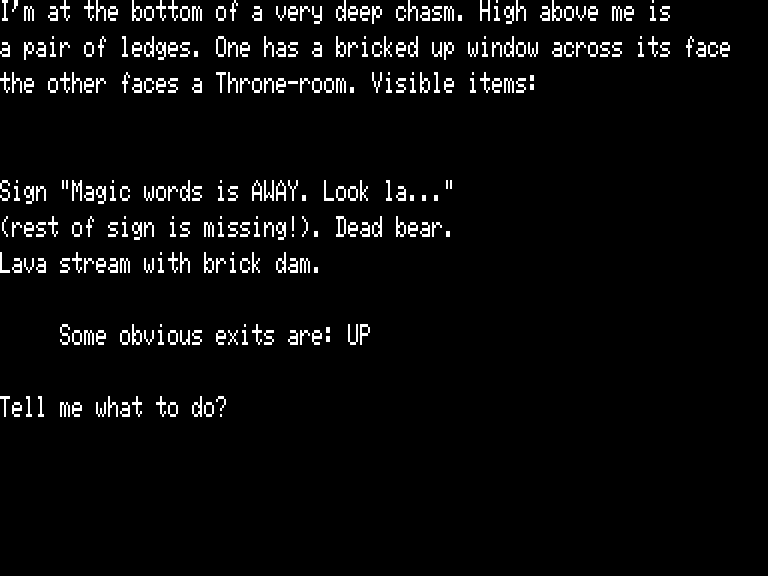 So, that’s Adventureland. After beating it, I tried replaying it to see if I could beat it again without saves using nothing but my map and memory. It took me 14 minutes. This wasn’t at all a perfect playthrough. Getting the bees to the dragon took way too many tries, I got killed a few times, mostly from forgetting to drop the mud before walking past the dragon, and I wasted the gas by accident by typing DROP GAS instead of DROP BLADDER. But none of these are game ruiners; you can come back to life quite easily by heading EAST (at least this always works in my version of the game), and more gas appears at the swamp if you waste the initial supply of it. Some things that might make the game unwinnable include feeding honey to the bear, or breaking the magic mirror, which can be done by dropping it not on the rug or throwing the axe at the bear guarding it, or letting the golden fish die by taking it without having a bottle of water for it.

I’m not at all sorry that I finally tried Adventureland. It contains more interesting puzzles than Adventure, even if they’re still a bit on the easy side, when they aren’t ridiculous. A lot of my gripes with Adventure are alleviated with Adventureland’s smaller size; I actually wouldn’t say it’s smaller, but rather more compact. I estimate both games have about the same amount of interactive content, but Adventure spreads it out among a far bigger game world, while Adventureland has something interactive in most of its rooms. Movement generally obeys orthogonal directions both ways, there are no secret passages, though sometimes direction involves typing “GO HOLE” or some other landmark mentioned in the room description, and there are no bloody dwarves. The game does try to kill you a lot more than Adventure, but it’s for the most part a slap on the wrist, and it wouldn’t take that long to retrace your steps from starting a new game anyway.

But, I hesitate to call Adventureland a good game. Maybe I’m being unfair to it and all of the games before Zork, but Adventureland is no Zork. Out of necessity for the 16KB cassette format, room descriptions are pragmatically terse, and do little for world building as Zork did. Every aspect is minimalist, such as the two-word parser, the unchanging locations, the small and disjointed world, the nonexistent plot, and the short length, and it’s hard for me to praise this first effort very highly knowing how much better adventures could get, even on the same system.