From the HOTMK, it was just a short trip north and down to the unexplored dirty passage, and from there I went down to the complex junction. This was around the place where Crowther gave up and left behind a confusing mess of tunnels that lead nowhere. Rooms like Bedquilt and the Swiss cheese room are still there, and they still have those passages that randomly go off in different directions, but this zone merges with several new ones added by Woods, and tends to take on a fantasy theme.

East of Bedquilt is a “shell room” containing a giant clam that I couldn’t get open, and an anteroom with the “CAVE UNDER CONSTRUCTION” sign, placed by Witt Construction Company, and copies of “Spelunker Today” magazine lying around. The magazines are unreadable (“I’M AFRAID THE MAGAZINE IS WRITTEN IN DWARVISH.”). Past the anteroom is “Witt’s End,” a maze reminiscent of Zelda’s Lost Woods, where you could get lost forever, but if you keep moving in any direction other than west, you’ll eventually escape.

One of the passages north from Bedquilt led to a large low room with passages southeast and southwest. Southwest led to a chasm with a bridge guarded by a troll who demanded treasure in payment. I tried throwing the axe, he just caught it and said “GOOD WORKMANSHIP, BUT IT’S NOT VALUABLE ENOUGH.” He accepted silver in payment. Past the bridge was a fork with passages north and south. North led to a chamber with some rare spices, and a “breathtaking view” with an unusually detailed room description: 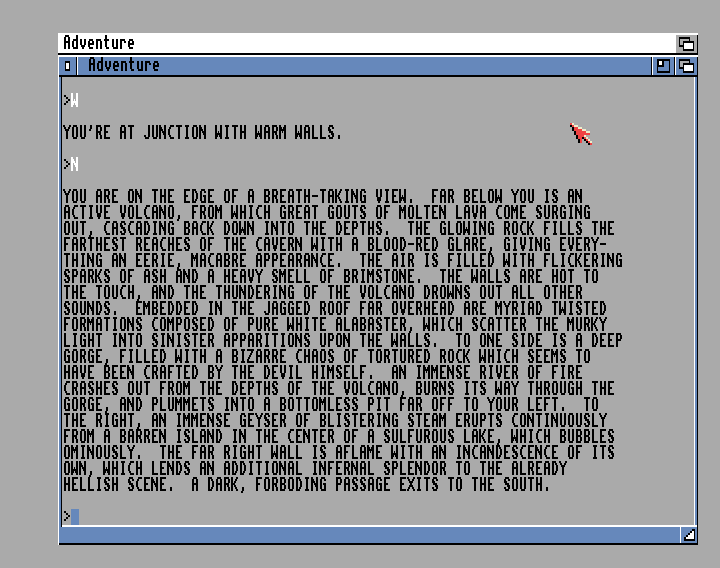 Someone should tell Kentucky they’ve got an active volcano! There didn’t seem to be much to do here. Attempting to descend produced “DON’T BE RIDICULOUS!”, so I left by the south and returned to the fork.

South from the fork led to a “barren room” cautioning me there’s a “BEAR IN ROOM!” The puns continue
>ATTACK
WITH WHAT? YOUR BARE HANDS? AGAINST *HIS* BEAR HANDS??
I couldn’t find anything else to do here, or find a way to proceed except to return past the bridge, and the troll demanded more payment to cross back. My spices sufficed.

Southeast led to an “oriental room” with a priceless Ming vase, and a passage leading through a misty cavern and to an alcove that I could only squeeze through by dropping my whole inventory. Past the alcove was a naturally lit “Plover room,” an emerald, and a passage further northeast which was too dark to explore.

Returning back through the alcove and collecting my stuff, the program warned me that the batteries were getting low. I explored southward, past the oriental room was a passage returning to the Swiss cheese room. A little while later and a few more rooms mapped, my lantern finally died, leaving me stranded.

Another restart, another venture into and past the complex junction, to the last of the unexplored paths. This time I stopped first at the maze of twisty little passages all different first to pick up a spare battery so that I’d have more time to map. First, though, I checked out that secret canyon from the HOTMK. Turns out it’s not a sequence breaking shortcut to the rooms beyond Bedquilt after all, but it leads to a dragon, and possibly the most famously silly puzzle in the entire game. 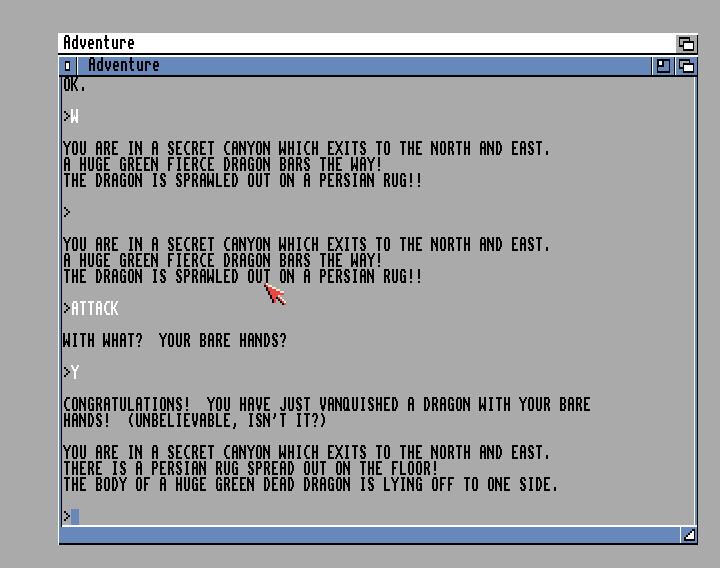 This series of secret canyons eventually led to a dead-end reservoir, but also contained two downward passages to the rooms beyond Bedquilt after all.

Past the shell room was a useless arched hall and cul-de-sac.

Going south from Bedquilt led to a “twopit room,” a large room with an east and west end, each with a descendible pit. The east pit had a small plant begging for water, which I provided, and it grew to be 12 feet tall and demanded more water. I know several rooms had water running through them, and there’s a stream outside of the cave, but for now I left it alone. The west pit has oil, which I was able to put in my bottle but found no use for. I tried oiling the plant to see what would happen; it worked, but other than annoying the plant nothing happened.

Going up from Bedquilt sometimes leads back to Bedquilt, sometimes back to the dirty passage, and sometimes to a new junction of secret canyons. These canyons lead north to another “window on pit” with yet another shadowy figure I can’t interact with, and south to a stalactite from which you could drop back into the maze of twisty little passages all alike if you wished.

Going south from the Swiss cheese room eventually led to a canyon leading east and west, with dead ends both ways.

I think mapping is mostly done now. The only unexplored location I know of is northeast of the plover room, which I can’t get to yet because it’s too dark.

Wood’s Adventure has quite a bit more interactive content than Crowthers’, but it’s still pretty sparse. After getting past the snake, which was Crowther’s final puzzle, almost the entire cave is accessible. Both mazes are ungated, and almost the entire lower level, where most of the new puzzles are located, is accessible without needing to solve any of its puzzles. The dragon past the HOTMK’s secret passage only blocks off three rooms with nothing in them but a redundant shortcut to the lower level, and the chasm troll blocks off a forked passage leading to a few interesting rooms but is easily passed as long as you have a treasure, which you almost certainly do.

Next session, I try to solve the outstanding puzzles of Wood’s adventure. Including:

My map so far: