I restarted Adventure, continuing my effort to map out the first areas of the cave, and to note any differences. Getting back to the HOTMK took less than a minute, from here I could proceed through the west side chamber and to uncharted territory.

The new maze of twisty little passages, all alike, is considerably more convoluted than the old one. Further complicating things, a pirate wanders the maze, and will steal your treasure if he finds you, depriving you of your breadcrumbs. Between that and the constantly attacking dwarves, mapping out the maze is a real test of patience.

With lots of rooms and only a handful of non-valuable items that the pirate won’t steal, mapping out the maze took me a few tries. Eventually I’d run out of items to place and then plunge into unexplored territory, and get hopelessly lost or killed by dwarves. But my map got more complete with each game restart.

The maze continues for a few rooms past the brink of pit, where one room has an unmarked northwest passage, the only intercardinal passage in the entire maze, and the only reason I discovered it was because I’d been diligently trying the NE/NW/SE/SW directions in every single room regardless of whether the room description indicated a passage there or not. Through this passage is a dead end containing your stolen treasure, plus a pirate’s chest.

Returning to the long hall, the west end now joins with a north-south passage, and going south leads to a new area:
YOU ARE IN A MAZE OF TWISTY LITTLE PASSAGES, ALL DIFFERENT

Another maze! The good news is that unlike the previous one, the passages are ALL DIFFERENT instead of ALL ALIKE. This means the description is slightly different in each room, e.g. “YOU ARE IN A TWISTY LITTLE MAZE OF PASSAGES, ALL DIFFERENT,” and if you’re paying attention to this then you don’t need to drop treasures as breadcrumbs. The bad news is that mapping this maze out in a coherent visual manner is nearly impossible, and I didn’t even try.

Up until now, I had been mapping Adventure with a combination of Excel and Trizbort. I hadn’t used Trizbort alone because you can’t rely on passages to connect orthogonally; going east doesn’t necessarily mean that you’ll emerge in the next room from the west. Instead, I have made Excel tables to track each room’s exits, of which there can be up to 10; the four cardinal directions, the four intercardinal directions (NE/NW/SE/SW), up, and down. Once a room is fully graphed, and all connected rooms graphed as well, I attempt to draw it in Trizbort in a coherent manner.

In this maze, there are 12 rooms of twisty passages, and each one of them has ten passages, each leading to one of the other ten. There is the exception of the first room, from which the down passage leaves the maze and returns to the west end of the long hall, and one passage from a “LITTLE MAZE OF TWISTING PASSAGES” leads to a dead end, containing a vending machine. To map it all out in Trizbort would be insanity. I’m satisfied with this partial map that includes all rooms, but leaves out most of the passages, using the starting room as a central point. 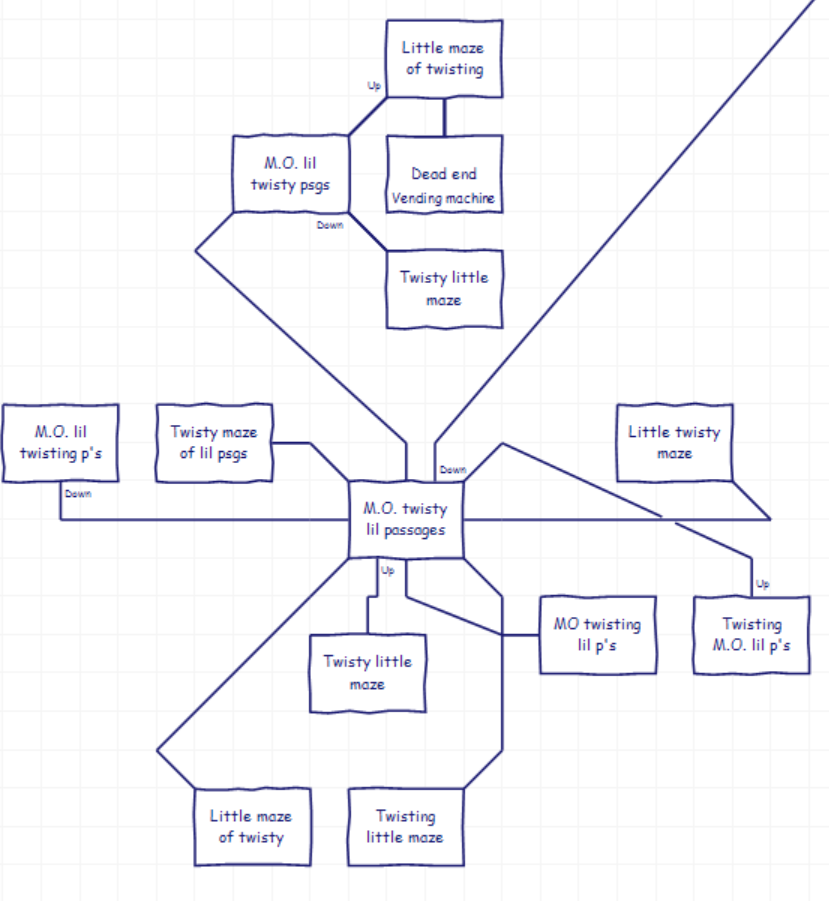 In any event, the only useful feature of this maze area is the vending machine in the dead end, which dispenses fresh batteries for your lantern in exchange for coins, but also decreases your score.

That’s two mazes charted. I’ve deleted several redundant passages from the maze of twisty little passages all alike to aid its readability, but as far as I know every room of it is present.

All that’s left is the dirty passage and the secret e/w canyon from the HOTMK (which I assume I’ll be visiting from the other side), but I have a feeling I’m just getting started!

My map so far:
Email ThisBlogThis!Share to TwitterShare to FacebookShare to Pinterest