Watering the plant a second time made it grow even more, at which point “CLIMB PLANT” from the bottom of the west pit led to a new corridor, leading to “giant room” with a nest of golden eggs and a sign saying “FEE FIE FOE FOO,” a room with a rusty door which opened after oiling it with oil from the east pit in the twopit room, and past that a cavern with a trident. Given that other rooms with signs had magic teleportation words XYZZY and PLUGH, I figured FEE FIE FOE FOO had to be another magic teleportation word. Turns out this teleports the golden eggs to the giant room, making it seem like a good idea to bribe the troll with these eggs, and teleport them back later.

The trident opens the giant clam, revealing a pearl which rolls down into the cul-de-sac, which prompts the program to acknowledge the clam was an oyster all along, and it apologizes for failing to recognize the right kind of pelecypod.

The barren room is a pretty simple puzzle; it’s just that some of the verbs involved are bizarre. Bringing food and keys to this room, I typed FEED BEAR to calm him down, then UNLOCK CHAIN to free him. TAKE BEAR to get him to follow you. Noting that the gold chain is valuable, TAKE CHAIN as well. When crossing the bridge back, the troll pops up to demand more payment. THROW BEAR and the bear chases the troll away. I did this without any outside help; it helps to think like a programmer and consider that memory space for vocabulary is limited, and that commonly used verbs should be reused whenever possible.

Exploring the dark passage past the plover room continued to bamboozle me, so this is where I turned to the Internet for help. Turns out “PLOVER” is another magic word, and teleports between the plover room and Y2. So with that I was able to teleport from Y2 to the plover room with my lantern, and from there explore the dark passage, leading to a single room with a platinum pyramid and a congratulatory plaque. Real clever, Don. Meanwhile I also checked a hint concerning the last lousy point, which you get by taking the magazines from the antechamber and dropping them in Witt’s End.

Now it came time to plan a way to solve the game. I had all of the pieces, I had a complete map with the locations of 15 treasures, and I knew how to retrieve them all. But I had to devise a plan to retrieve them all in one playthrough. Your lantern batteries do NOT last long, and you forfeit a perfect score by buying spare batteries, so I had to move fast and efficiently. Your inventory limit is seven items, and you don’t ever want to not be holding onto the lamp or axe, so that leaves five free spaces. The platinum pyramid can be retrieved pretty quickly by teleporting to Y2 and then to the plover room, but the emerald can’t be retrieved by teleporting. That leaves 14 treasures to retrieve, but the Ming vase must be dropped on the soft pillow or else it shatters, meaning we need to retrieve 15 items, which will take at least three trips.

So with trip 1, after retrieving the pyramid, I proceeded down to the caves normally, with the lantern, keys, bottle of water, and food. Picked up the rod, cage, and bird along the way, scared the snake and left the bird and cage at the HOTMK, and then went to the fissure to span the bridge so I could drop the rod. That leaves the lantern, keys, bottle of water, and food in my inventory, with three free spaces left. Soon enough the first dwarf threw his axe at me, which I took, leaving two spaces. I went to the lower levels, watered the plant twice, got the oil, and climbed the plant to the giant’s lair and took the eggs and trident. No spaces left.

I bribed the troll with the eggs, took the fork south to the barren room and fed the bear, freeing two spaces which I filled up by taking the gold chain and the rare spices in the north end of the fork. After using the bear to scare the troll away and returning to Bedquilt, I dropped the keys and the empty bottle, freeing two spaces again. Got and used the magazine to score the last lousy point, got the pearl, got the pillow. Inventory consists of a lantern, axe, trident, chain, spices, pearl, and pillow, and no space is left. I returned to the surface using PLUGH at Y2 to save some time, and dropped off all of the treasure and the pillow, making sure to EXTINGUISH LAMP before dropping the treasures to save the batteries. 10 treasures to go.

I went back to Bedquilt and to the Oriental room to get the vase, the emerald, and re-retrieve the golden eggs. Going back to the hall of mists, I retrieved the diamonds and gold nugget, and once again PLUGH’d my way back, dropped off the treasures, and PLUGH’d back into the darkness.

While gathering the last few treasures, all nearby, I ran into the pirate who stole them from me. No problem, I was going to rob him anyway. Into the maze, at the end of which was the pirate's stash, where I stole my treasures right back plus his chest. I returned to the building, and deposited everything.

And then… nothing. My score was 276, and I was pretty sure no treasures remained. I checked a walkthrough, and it turns out to go to the next and final section of the game, you need to go back into the cave and do nothing for a while. I did, retrieved my bottle and keys in the meantime, and after several turns of walking around in circles at Witt’s End…
A SEPULCHRAL VOICE REVERBERATING THROUGH THE CAVE SAYS, “CAVE CLOSING SOON. ALL ADVENTURERS EXIT IMMEDIATELY THROUGH MAIN OFFICE.”

A little while later… 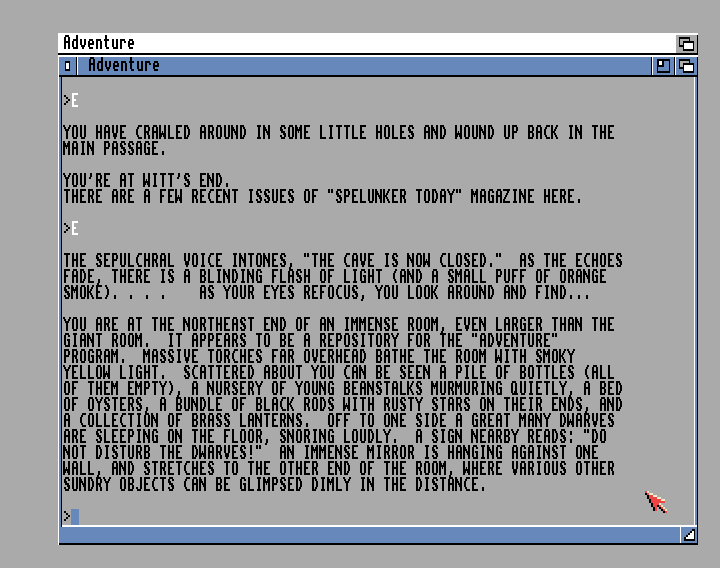 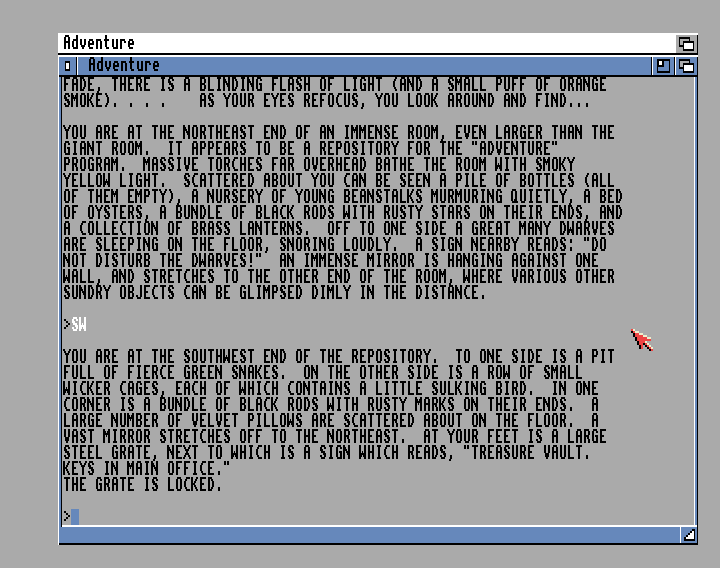 My inventory didn’t get teleported with me, so unlocking the grate didn’t work. 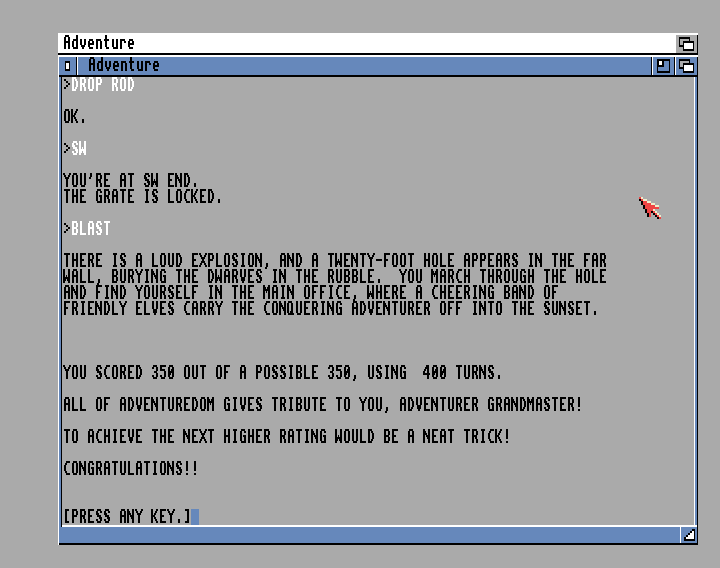 I win! How are you remotely detonating the dynamite, though?

Alternate ending for blasting the southwest corner instead – I bet it would suck to guess wrong if you were playing this version without quicksaves, since real saves don’t work: 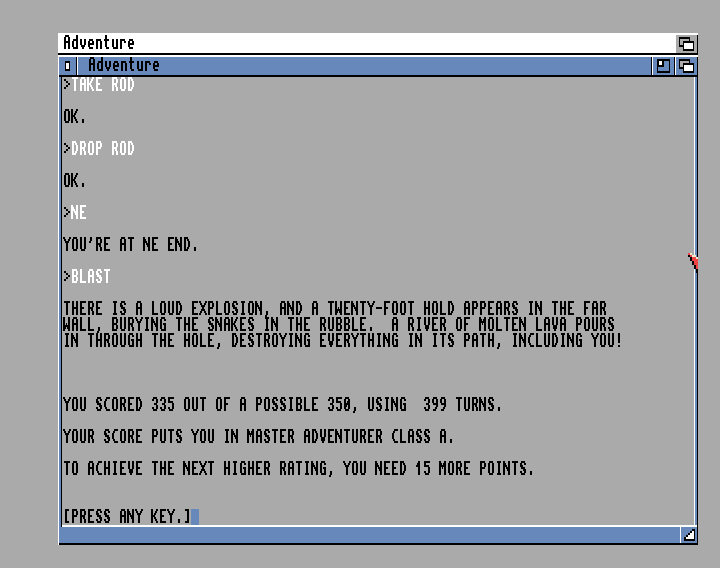 And a “special” ending for blasting while holding the dynamite (or just being in the same room as it): 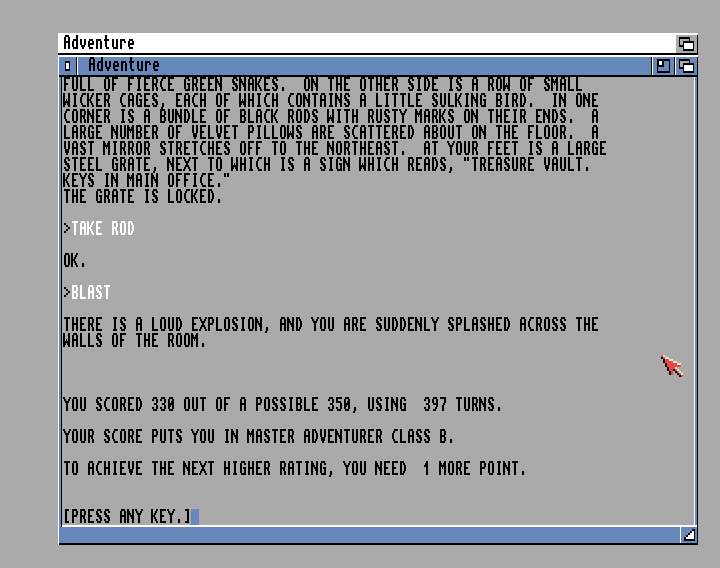 I went in without much expectation. Adventure is famous for being influential – it created one of the major genres of computer games, after all. But I had never seen much critique on the quality of the game (unlike Zork, which is widely considered to be a good game), as if being the first of its kind puts it above criticism.

Woods’ Adventure is a complete game, for sure, and apart from the wacky endgame it doesn’t feel experimental. There’s purpose to every room, passage, and puzzle, even if sometimes the purpose seems misguided (such as the maze of twisty little passages all different), Even though most of the rooms are functionally empty, they contribute to the vastness of the cave, and they have interesting and unique descriptions. Most of the sequences of connected rooms eventually lead to something, either a treasure, or a shortcut to a hub area, or a dead end with an interesting description. The cave layout has a deliberate sense of progression to it, starting out linearly with claustrophobic descriptions, opening up slightly into branching rooms, halls, and mazes, and at the bottom levels becomes more fantastic. The relatively small number of puzzles means that after getting past the snake early on, almost the entire cave is accessible, with only a handful of rooms gated off by puzzles. Aside from being randomly killed by the dwarves, which didn’t happen that often, cheap deaths don’t really exist. You can die in stupid ways, but they’re always things you obviously shouldn’t do, like typing “JUMP” at precipices or wandering in the dark. I never got killed for messing around with the troll or the bear or even the dragon, which I’d certainly been conditioned to expect by Infocom and early Sierra games. The parser is bare-bones, as one might expect, accepting only one or two word commands, and only a handful of action verbs are ever used. But despite that, the things it recognized often surprised me. One of the most fun things about text adventures and parser-based graphic adventures is doing silly things with the parser to see if the developers thought of a response, and enjoying the cheeky replies whenever it turns out they did. Adventure didn’t have a lot of those, but I was pleasantly surprised that it recognized any commands other than what was needed to win the game.

But there are just so many things about the game that irritate and annoy. Mapping is absolutely required, and it’s made annoying by the fact that you can’t rely on room descriptions to tell you where the exits are. They’re accurate more than 90% of the time, but the handful of invisible passages meant I just skipped reading the room descriptions and obsessively typed N/E/S/W/NW/NE/SW/SE/U/D each time I got to a new room. The non-orthogonal passages further made mapping a tedious pain, and there’s just so many of them. The dwarves were a constant nuisance, and I can’t see what benefit their non-zero chance to randomly kill you brought to the game.

It’s been said that the early adventure games were treasure hunts with puzzles, in the tradition of Adventure. My playthrough bears this out, although none of the puzzles here were particularly inspired. Most were easy, a few trivial, and a few ridiculous. The bridge troll, who can be bribed with a treasure at the forfeiture of points or chased away with a wild animal, anticipates King’s Quest, where the exact same thing happens, and happens several more times with more figurative bridges and trolls. Figuring out that FEE FIE FOE FOO were magic words was the closest thing Adventure had to a clever puzzle, though it was pretty obvious what to do with them. If the plover room had had just some signposting to indicate “PLOVER” was also a magic word, it could have been a good puzzle, but instead it’s just unfair.

Lastly, I couldn’t find a points list anywhere on the Internet, so I made one: