Woods’ expansion to Adventure added numerous features, among them points. Numerous other developers have since expanded on Woods’ version, including Woods himself, and because adding content usually changed the number of points available to score in the game, the point count became a convenient way to distinguish between major Adventure versions.

Wood’s original revision had a maximum score of 350 points, and is sometimes called “Adventure 350.” Even then, finding a playable “original” version proved to be a puzzle in itself. The original FORTRAN source is available, but it’s dependent on the PDP-10 machine, and I’d prefer not to have to learn how to compile and run FORTRAN on an emulated PDP-10 if a suitable port is available. The page above lists several “original” versions, and most of them appear to tinker with the content in some way

Don Eckman’s DOS port seems to be the most authentic. It makes no changes I could notice, and even preserves the all-caps text whereas all of the other ports switched to a “normal” mix of lowercase and uppercase. But there’s one major snag; saving doesn’t work. Typing “save” produces this message:
I CAN SUSPEND YOUR ADVENTURE FOR YOU SO THAT YOU CAN RESUME LATER, BUT YOU WILL HAVE TO WAIT AT LEAST 90 MINUTES BEFORE CONTINUING

But it’s just a leftover message from the FORTRAN program. There’s no way to actually load your game. You couldn’t in Crowther’s Adventure either, but with the small size you didn’t really need to. As noted in the Readme file:
The save and restart, under the old DEC system, were simply core saves,
with a couple of variables set to show that a restart is in progress.
I haven't yet implemented a save-to-disk feature.  This means, unfortunately,
that you must start over each time you play.  Ultimately I will get this fixed.

Then I noticed that there is an Amiga port of Ekman’s port. This would be acceptable; even if it didn’t allow saves, I could use quicksaves in WinUAE instead.

Getting WinUAE set up to play the game was somewhat of a challenge. To run it, I had to configure WinUAE to emulate an A4000 model, set up a Workbench environment in it, and create a virtual hard disk image pointing to a “software” folder on my real hard drive containing the adv350.lha file.

Unpacking the adv350.lha file was easier than advertised, I could just unzip it within Windows using 7z, and the files inside were usable within the emulated Amiga environment. 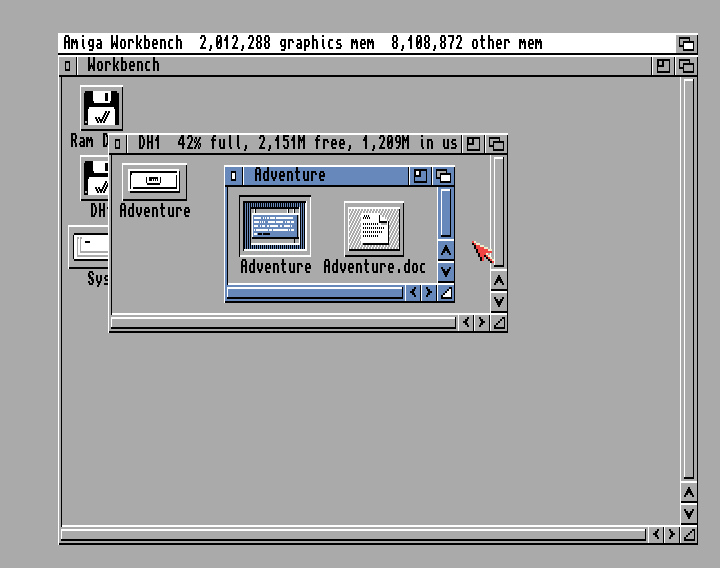 Once Workbench loaded, it showed my virtual hard disks, and I opened the secondary disk that I labeled “DH1,” and inside was the Adventure folder. Inside that was a runnable Adventure program. I double-clicked that, and got: 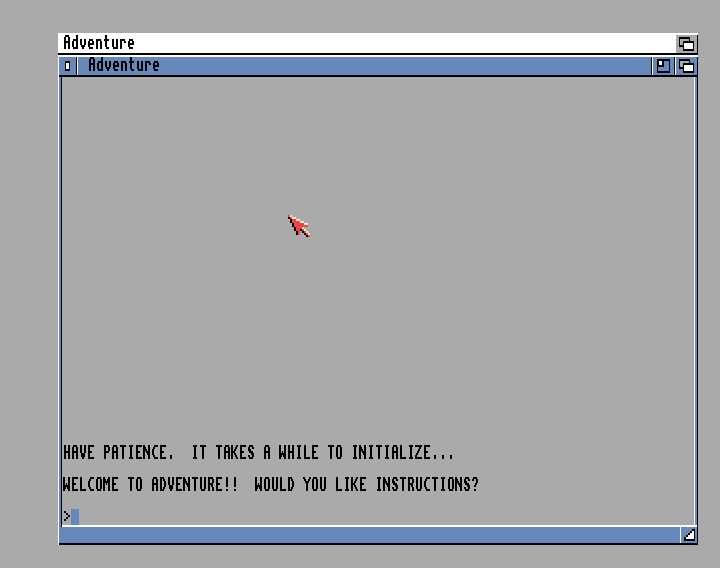 Typing “save” outputs this message:
SUSPEND IS NOT IMPLEMENTED

But that’s OK. I have quicksaves, which I plan to use responsibly.

I made my first session about mapping. It started off pretty much the same as before, with the road, hill, forest, valley, and grate, so I mapped it quickly, got the keys, lamp, food, and water from the building, and unlocked the grate to go into the caves below.

It continued pretty much the same for a while. Same cobble crawl, same hall of mists, same hall of the Mountain King, same silly puzzle involving the bird and the snake, same set of treasures scattered around the HOTMK, the same axe-throwing dwarf with bad aim, followed by knife-wielding dwarves with annoyingly good aim and tenacity.

Some changes I noticed early on:

Soon enough I ran into dwarves again, and without my axe I had no way to defend myself and they eventually killed me two more times. The program then got snippy with me: 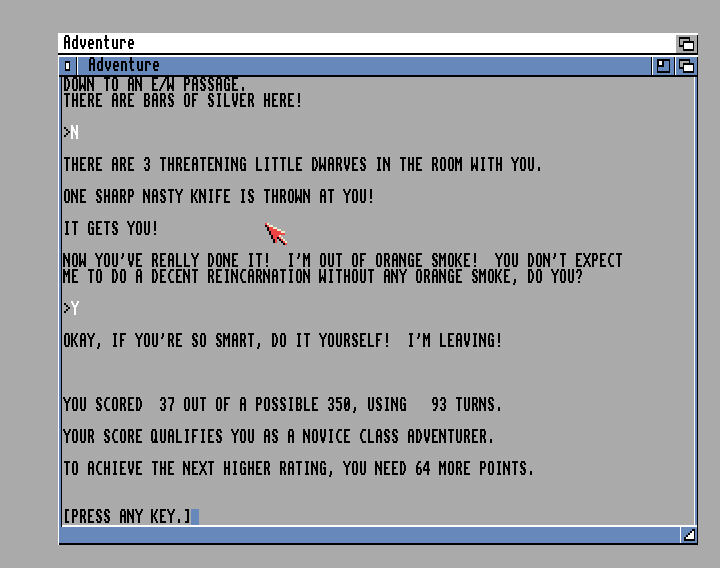 I suppose I could do it myself, but this seemed like as good a stopping point as any.

My map so far:
Email ThisBlogThis!Share to TwitterShare to FacebookShare to Pinterest