A lot of engineers from the earliest days of video games have commented that they weren’t terribly concerned with being accused of ripping off ideas. Gremlin’s debut title Blockade has the appearance of a game that’s been ripped off a lot. Be it Atari’s Surround, computer games like Worm and Nibbles, Mattel’s Snafu, the light cycles in Tron, or of course Nokia’s Snake, it’s pretty unlikely that they all developed this gameplay formula independently. Blockade, as far as we know, was the first, and is assumed to be the game that everyone else directly or indirectly ripped off.

R and I had another game session, this time starting with Blockade, to segue into Atari’s Surround.

There’s not a whole lot I can say other than that this is clearly the original Snake. It’s two players only, turns are 90 degrees, there are no action buttons other than the 4-way movement, and gameplay isn’t particularly speedy. Sealing off your opponent also means sealing off yourself, but if you have more open space than your opponent, you’re almost guaranteed a win.

There’s a lot of playroom for a Snake type game, maybe too much, as it can take a long time before you have to engage your opponent. One quirk is that it’s possible to reverse your direction and instantly crash into yourself and lose the point, which makes it risky to pull tight 180 degree turns. It’s easy to accidentally turn back too quickly and just crash right into yourself. Later adaptations (including Atari’s Surround) would prevent you from doing this by accident.


Another launch title for the VCS, with 14 modes. 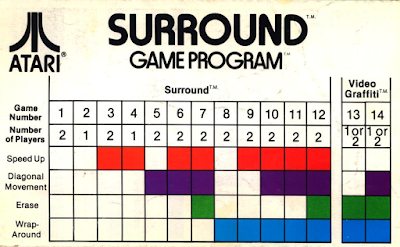 There’s a misprint here. Modes 10 and 11 appear to be identical, but mode 10 does not have the Speed Up function.

Like Air-Sea Battle, the modes here are fairly consistent and logically arranged. Every possible combination of the binary settings Speed Up, Diagonal Movement, and Wrap-Around are represented as modes, and comprise eight of the 14 modes. The remaining six are:


Some things making this different from Blockade are already evident. The playing field is tighter, forcing players to engage sooner. As mentioned earlier, the game only accepts directions 90 degrees from your current heading, which prevents you from killing yourself by reversing your direction. These are both welcome changes, though you can make the game accept 180 degree direction changes by adjusting your difficulty switch.

Another feature, and one I’ve never seen in a game like this before, is that your snakes’ head pieces can occupy the same space without a crash, which causes your trails to merge for a while until your head pieces finally go in different directions. It’s a neat, if potentially confusing feature.

As with Blockade, games often ended with the arena separated in two, with victory going to whoever has the most space, and the loser just circling around their side of the arena until inevitably crashing. This scenario is a bit boring.


The same rules as mode 1, but now you can play against the computer.

Unlike Air-Sea Battle, there’s actually an AI routine here. But it’s unbearably stupid on the default setting. You can adjust it through the left player’s difficulty switch.

On hard mode, it’s less suicidal, but still pretty stupid. I’d go out of my way to give it opportunities to trap me, and it didn’t take them even once. Eventually the arena gets separated, and then the computer tends to squander the space it has to itself, forcing itself into a dead-end of its own making.


Speed Up progressively increases the round’s speed in five stages, accelerating about every four seconds. The snakes start off moving at 4 spaces per second. Then they speed up to 5, then 6-7, then 10, and finally 20 spaces per second, at which point the game doesn’t last much longer. Now it reminds us a lot more of Tron.

This mode felt less strategic, with a lot more points occurring because one of us screwed up than because of a sound strategy. This could be partly blamed on the TV’s input lag, which would be a non-factor back in 1977. Without a genuine console and CRT for comparison it’s hard to say, but previous games didn’t feel laggy. Here, a lot of deaths just happened because one of us was caught off-guard by a sudden speed increase and mistimed a vital turn. Of course, maximizing your opponent’s chance to screw up while minimizing yours has potential for strategy too, especially in the first few seconds when you have time to think, and know that eventually you won’t.

Mode 4: Vs. Computer, the rematch


The other singleplayer mode against the computer, but with the Speed Up rules.

As one might expect, the computer isn’t any smarter than before, but the speedup doesn’t harm its performance in the slightest. It makes perfectly timed hairpin turns at the fastest speed, while you probably can’t. I certainly can’t. This does make winning more of a challenge, though still not that much of one. Trying to trap the computer is risky but very effective when it works. Simply trying to outlast it usually works fine. It’s just a question of whether it does something stupid before your reflexes fail you, and for me, most of the time it did.


Now you can move diagonally, which increases your mobility – it’s unsurprisingly faster to travel in diagonal directions this way – and also leaves semi-passable walls, because you can pass through a diagonal wall by traversing it diagonally in the perpendicular direction. That maneuver is a bit risky because if you mistime it, you’ll just crash into it instead.

Mode 6 has Speed Up, and made it easy to travel diagonally by accident. Timing diagonal wall traversals was even riskier thanks to the increased difficulty in timing it.


Misleadingly named, Erase doesn’t actually erase any lines on the board, but rather allows you to move without leaving a trail by holding the controller button. When you release the button, you draw lines normally. Erase always has Speed Up and Diagonal Movement, likely because without Speed Up, games could go on forever, as a trapped player could just move in circles forever at a manageable speed.


Another novel feature that I haven’t seen in any other Snake game. With Wrap-Around, there are no borders on the edge of the screen, and the playfield goes on infinitely in all directions until you start blocking them off. This completely changes the way you think about your strategy, opens up a lot of possibilities, and is, I think, much more fun for it.

As you might expect, mode 9 adds Speed Up, mode 10 adds Diagonal Movement, and mode 11 adds both. The Speed Up modes made it more difficult to maintain strategic action, with each round eventually becoming a frantic chase for survival.


Every feature is turned on at once, for the most chaotic game of Surround possible. There’s plenty of opportunity for creative strategy, but it’s hard to figure out a good one, and even harder to execute it.


These two modes are just drawing programs. It’s as dumb as it sounds. Mode 13 has 4-way movement and mode 14 allows diagonals, as if they were desperate to pad out the mode lineup.

Aside from the dumb video graffiti modes, I thought this was the best of the Atari launch titles, and the best Snake style game I’d ever played. The numerous options keep it fresh and interesting long after Blockade and most other games of this type get stale.
Email ThisBlogThis!Share to TwitterShare to FacebookShare to Pinterest
Labels: Atari